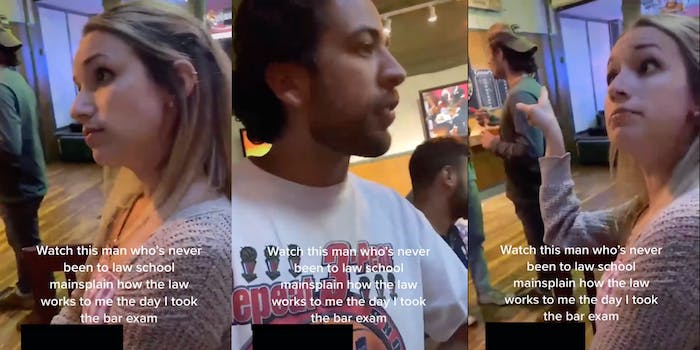 'Yeah I could’ve gone to law school but business was the better move for me.'

There’s nothing like a good example of mansplaining to really bring the women of the world together.

It’s happened to all women at least a few times. When a man broaches a topic that he has little to no experience in and lectures a woman, an expert, on said topic. It’s a unique experience, one that typically leaves the person on the receiving end with a bad taste in their mouth. In a TikTok video posted to user @chatty_kathy8’s account, the term is perfectly demonstrated by an overconfident dude at a bar.

This man had the audacity, according to @chatty_kathy8, to give her a lecture on the law. He chose this ill-advised topic on the very same day she took her bar exam, the defining examination for those who practice law.

The video sees a bearded man in a simple T-shirt standing next to @chatty_kathy8, discussing the inner workings of American law. @chatty_kathy8 is clearly annoyed by the conversation but politely listens as the man spouts what one can only assume, based on her body language, is nonsensical drivel. Much of their conversation is overpowered by the thumping background music and the text-to-speech feature.

The text overlay sets the scene for those who can’t make out more than the mention of a “grand jury” in their back and forth. It explains that the stranger has “never been to law school,” despite his confidence in discussing the matter. In the caption for the video, @chatty_kathy8 sarcastically quotes the man’s statement that “yeah I could’ve gone to law school but business was the better move for me.”

Commenters delighted in @chatty_kathy8’s video, applauding her for (hopefully) taking the mansplaining dude down a peg. A number of viewers responded with irritation, however, with a divide quickly forming between female and male viewers. A number of men asked @chatty_kathy8 if she actually listened to the non-expert explain a topic she is pursuing a career in, or if she was “just hostile.”

“He’s so clearly trying to have a conversation and ur being so defensive and giving attitude,” one commenter wrote.

Women rushed to @chatty_kathy8’s defense, noting that “men really got noting but the audacity.”

A number of women drew connections between male commenter’s distress and the man’s behavior in the video, hypothesizing that “men in the comments are mad cause they do the exact same thing to other women.”

Other commenters latched onto the man’s business major, trolling him for majoring “in business, with a focus on Everyone Else’s.”

“Majored in business yet he can’t stay in his own,” one quipped.

Through a series of followup videos, @chatty_kathy8 responds to a few of the more hilariously toxic responses to her clip. In the first, she responds to a commenter who “informed” her that “mansplaining isn’t a thing” before advising her that “next time” she shouldn’t “give off vibes you don’t understand and they won’t try and be nice and explain.”

“Oh no you guys, this random man on the internet thinks that I give off vibes that I don’t understand what’s going on,” she says, sarcasm dripping from every word. “But what does this mean? How do I give off those vibes? Can you explain it to me?”

Her stellar sarcasm even reached the video caption, which implores the male trolls in her comment section to “please help me be better, I’ll be so lost without your input.”

As one person noted of the comment that prompted the video, he “literally mansplained mansplaining.”

In a second followup, @chatty_kathy8 responded to the commenter who asked if she listened to the man or if she was “just hostile” along with all the other men who told her she “should have just sat and listened to him.”

Joking about how, as a Leo, she “thrives off of being the center of attention,” @chatty_kathy8 thanks the male trolls for showing up and helping her video go viral. She also kindly thanks them for “proving my point.”