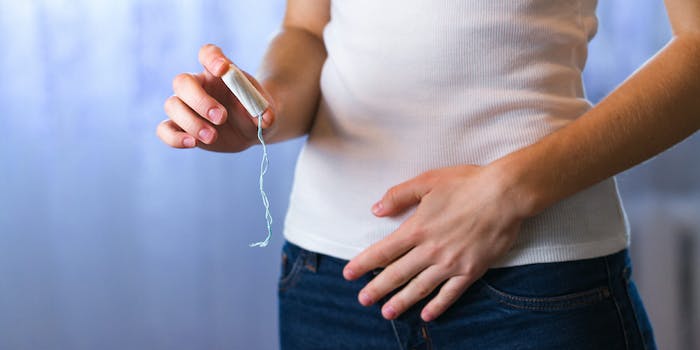 He also described some uterine linings as ‘extra juicy.’

We’re all painfully aware that a lot of cisgender men know hilariously little about periods, but one comment by a random dude about the number of tampons needed per cycle takes it to a new level.

Look at this fucking dweeb pic.twitter.com/2QFqNuqvZz

Using stats of unknown origin, the man claimed that the average period is between 10 and 35 milliliters of blood (he’s wrong, it’s more like 30-60 ml) and that a tampon holds about 5 ml. “So 7 tampons per cycle,” the man concludes, clearly not aware that leaving tampons in for too long can cause toxic shock syndrome.

Then, he makes possibly the wildest claim of all: “9 periods a year = 90 tampons max.” It’s hard to imagine how this man extrapolated nine periods per year for a bodily function which people literally call “the monthly cycle.” He concluded his comment by diminishing the cost of period products, saying, “Cut down on your starbucks frapps [sic] and stop whining.”

People on Twitter had a field day with his incredible foolishness on so many fronts.

The average number is 35ml-45ml. So literally the only thing he got right was how many days are in a week.

Nobody told me about the 4 free cycles per year. Did I have to write in to apply?

One person even went the extra mile and did math with real data. With an average period of five days, changing your tampon with healthy frequency, and an average cycle of 28 days, the need actually comes to 390 tampons a year.

In case anyone wanted to know the ACTUAL math… pic.twitter.com/i4qCTUD59q

Dear cis dudes, before you dismiss arguments against taxes on period products, look at the real numbers of how much money it costs to prevent menstrual blood from free-flowing everywhere. And in general, don’t assume you know better than people who actually menstruate.