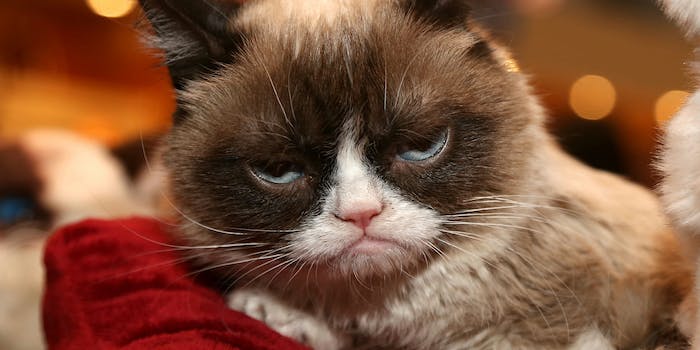 RIP to a meme legend.

Grumpy Cat, who became a viral meme for her sulky facial expression, died this week at the age of 7. Her family announced the news early Friday morning.

“Despite care from top professionals, as well as from her very loving family, Grumpy, encountered complications from a recent urinary tract infection,” the family said in a statement shared on the cat’s social channels. “She passed away peacefully on the morning of Tuesday, May 14, at home in the arms of her mommy, Tabatha [Bundesen].”

Some days are grumpier than others… pic.twitter.com/ws209VWl97

Grumpy Cat, whose original name was Tardar Sauce, became the subject of memes after her photo was shared on Reddit in 2012. Grumpy Cat’s expression was the result of an underbite and dwarfism. It made her (and her owner) famous: Grumpy Cat made appearances at SXSW in Austin, Texas, starred in a Lifetime movie, and was even recreated in a wax statue.

Grumpy Cat was one of the most well-known internet cats and, despite her pissed-off expression, she made a lot of people laugh. RIP, Grumpy Cat. You were good to us.