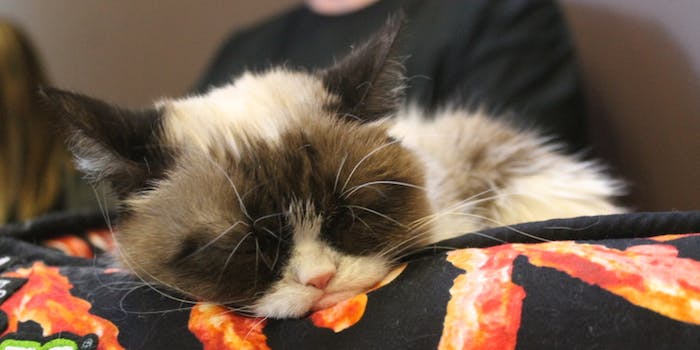 Live with Grumpy Cat, Waffles, and the celebrity felines of SXSW

Partying backstage with cat celebs, the sleepy stars of SXSW.

The best part of Friskies’ bacon-themed cat party—celebrating the most beloved Internet cat sensations, of course—were the bacon-and-blue-cheese donut holes I came across as I was about to leave.

But that was after I’d spent some time fawning over, and feeling bad for, a collection of cats during the South by Southwest conference in Austin, Texas, Friday at the Bacon Haus.

Grumpy Cat was the star of the show, but other celeb cats including Waffles and Nala were lined up at the venue next to portraits made of bacon, Friskies cat food, and scraps of paper with the Friskies logo on it.

Upon arrival Grumpy Cat was sleeping, and I was perfectly content taking photos of the tired feline. However, her handler asked if I preferred her to be awake, and quickly picked her up and posed the clearly grumpy fellow next to her bacon-and-Friskies portrait. 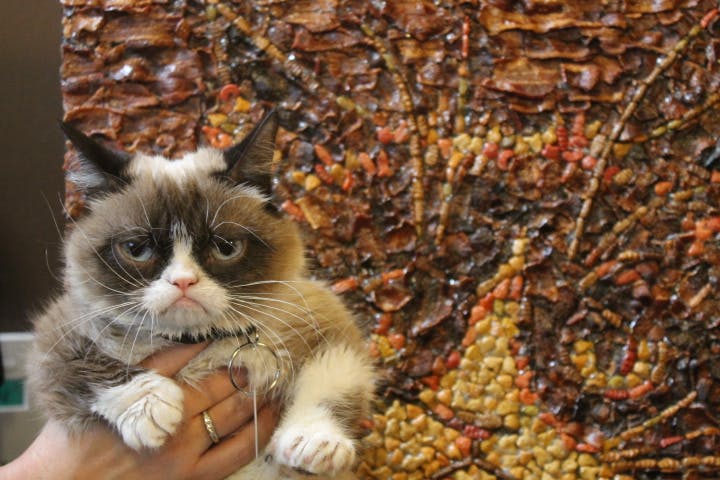 Artist Jason Mecier of San Francisco was commissioned to create the cat portraits. “It’s the first time I’ve ever done cats,” he says. Normally Mecier says he does portraits of celebrities, and has a candy show on display in Los Angeles.

Following the line of crazed journalists and fans, I was next introduced to Waffles, a Scottish Fold who was also sleeping. Then Laine, his owner, took out a toy and his ears perked up and his famous big eyes peeked out, seemingly ignoring all the onlookers (you might recognize Waffles from his iconic, bread-adorned photo). 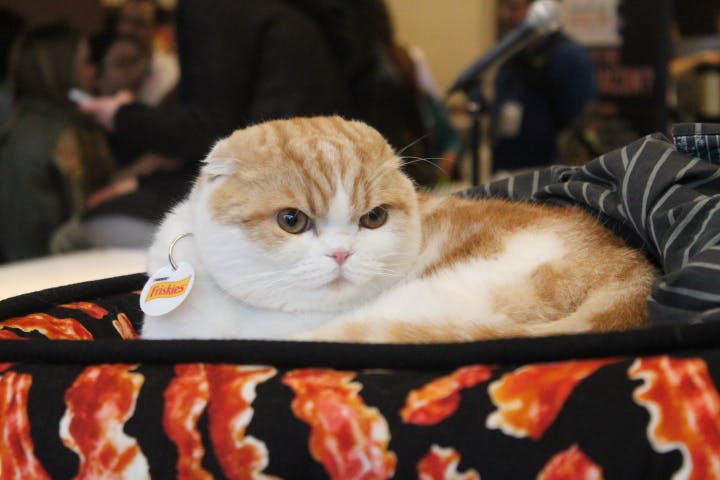 By far the most active of any of the Internet cats was Oskar, a blind cat who, with his brother Klaus, was hanging out toward the back wall next to his own bacon portrait. 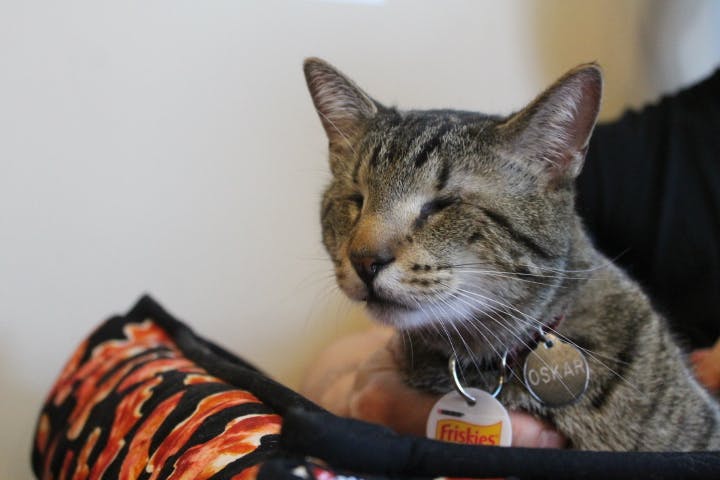 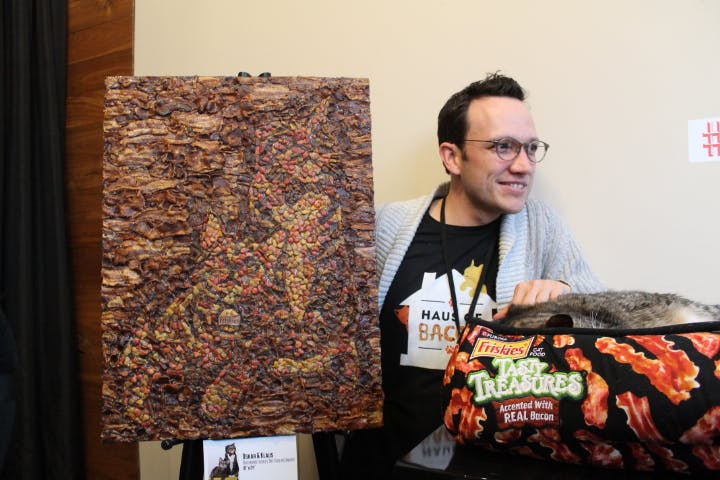 Oskar and Klaus were also the stars of the swag bags thanks to their book, Oskar & Klaus: The Search For Bigfoot. These were likewise bundled with a stuffed Grumpy Cat. 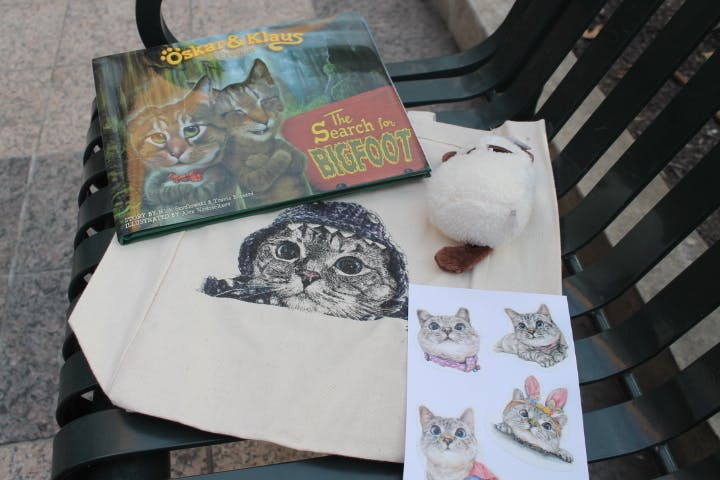 Nala, with over 1.8 million followers on Instagram, was hiding her trademark short legs beneath a body facing the window with a look that said, “Get me out of here.” 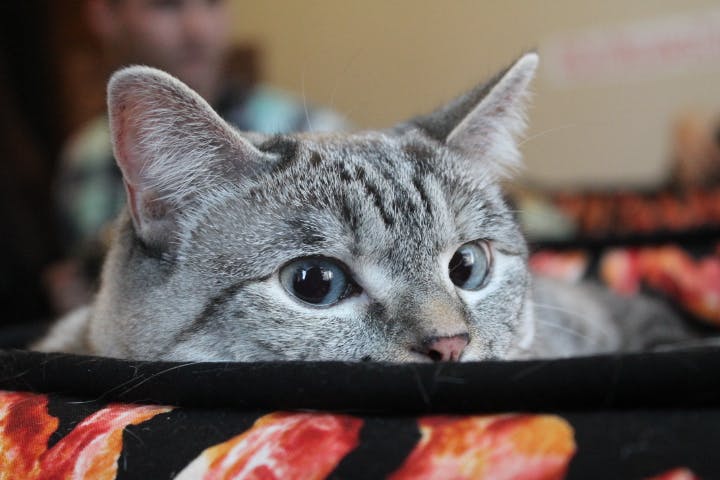 I feel you, Nala.

The cats were bombarded with camera flashes, loud noises, and greasy fingers running their hands over their shiny coats. None of them really seemed to mind it, though, and were all seemingly accustomed to being in the spotlight. 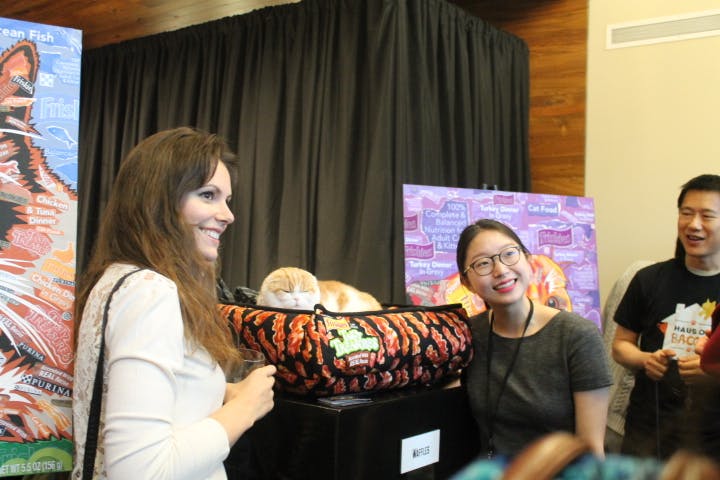 Friskies, for its part, turned the event into a fundraiser for orphaned cats, and has pledged to donate one can of its bacon cat food for each use of the hashtag #CatDreamsComeTrue up to 50,000 cans.

I’m not sure what they were dreaming about, but I’m guessing a nice, quiet, bed back home. 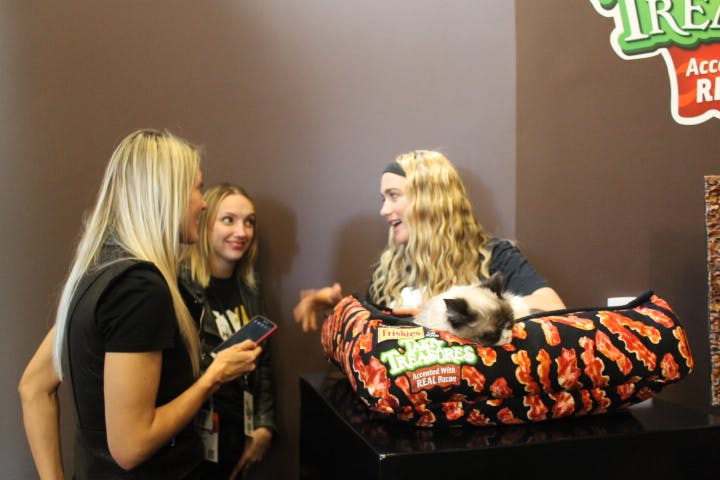