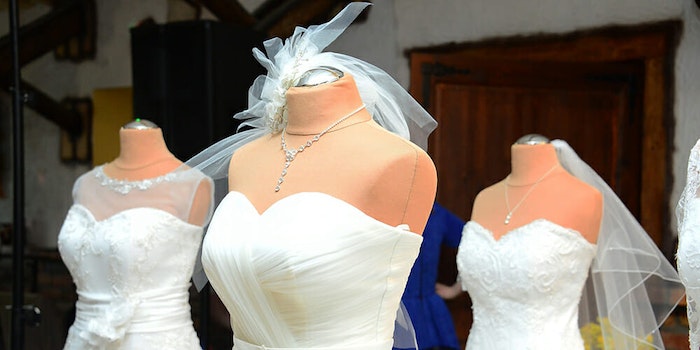 Always the mother-in-law, never the bride.

Romance novelist Amy Pennza horrified the internet this week with a photograph of her and her mother-in-law at Pennza’s wedding—both wearing wedding dresses.

My mother-in-law wore a wedding dress to my wedding. So, yeah, top that one, Twitter. #weddingfail @jimmyfallon pic.twitter.com/IjqvnXT6Ps

You know, in a way, this is beautiful. Like… Most mother-in-laws hold back until you’re actually married to let loose the full measure of their toxicity, but this lady was extremely upfront about it all. It’s like the way a rattlesnake rattles before it bites you. So nice.

Is she still alive? pic.twitter.com/cyiNJk4OxN

It's passive aggressive. A wedding is a big deal for the bride and finding some way to upset her or upstage her is what some people do. The annals of jealous weirdos trying to ruin weddings are loooooong.

Respectfully disagree on one small but important point. This was no passive in any way. This was Aggressive Aggressive and the hands tell you that.

Commenters also provided some pretty funny takes on the situation.

“You need to make a ‘who wore it better’ and send the results out as your Christmas Cards this year,” one Twitter user wrote.

You need to make a “who wore it better “ and send the results out as your Christmas Cards this year.

People also suggested strategies for dealing with similar missteps in the future.

A friend straight up had a bridesmaid who was prepared to spill red wine on anyone who wore white.

Someone did show up in white, and as the bridesmaid was at the bar getting the wine a group of guests who knew told her to wear her boyfriend's jacket and stay off the dance floor

Pennza followed up on Wednesday to reveal the full story—and it’s very different from the one people were imagining.

i need the story. what was her justification? was there an emergency?

It started out the way we might have expected, with an explanation about why the bridesmaids didn’t do their red wine spilling duty.

“My sister (matron of honor) said she didn’t pull me aside and talk about it because she hoped I was too distracted to notice,” Pennza explained. “My college roommate (bridesmaid) said the same thing.”

So, a couple people have asked for the story behind The Dress. Sorry for the delay! I have four kids (yes, I married him) on summer break, so my permanent state of being is "frazzled." I called my daughter "mom" the other day.

Later, my sister (matron of honor) said she didn't pull me aside and talk about it because she hoped I was too distracted to notice. My college roommate (bridesmaid) said the same thing.

But then there was a huge twist (Pennza is a writer, after all).

She grew up in extreme poverty. As a child, she used to sneak into the kitchen and eat match heads. That's a pica craving, and kids do it when they're malnourished.

Unable to resist any kind of bargain or money-saving strategy, she’s become a legend among her family.

However, she's a bargain hunter to the bone. Her money saving strategies are legend—and often hilarious. At family gatherings, we amuse ourselves telling stories of crazy shit she's done to save money.

She once walked casually to the table where I was eating a subway sandwich and put my discarded cold cuts in a baggie because "someone will eat them."

So when she spotted The Dress at an incredible bargain, she couldn't turn it down. If you ask her now, she says she feels terrible about it.

But less generous folks on the internet weren’t buying this explanation at all.

100% NOT a viable excuse. Not even close. Not even ball park. Has she gone the extra to make amends? Sounds like she has. But don’t kid yourself here, that was WAY out of line.

The updo cost money. I’m not buying the bargain hunter theory. Though I appreciate your generous soul.

This is a very nice story, thank you for the update.

But. Like. Rit dye is cheap, she could have dyed the dress and it still would have been a great deal.

So, Pennza went out of her way to describe how generous and loving her mother-in-law is.

When I got my first job, she hemmed all my work pants because I can't sew for shit. And because she was proud of me.

She never misses a band concert, sports event, talent show, science fair…you name it. She'd walk over hot coals for her grandchildren. She gives them everything. Because, you know, she grew up with nothing.

The woman is practically a saint.

She's frugal. But she's also incredibly generous. When my twins were newborns, she drove across town every night, slept on the sofa, and did three feedings. For two babies. Every night for months.

In context, it’s no wonder that Pennza looks back on it as a funny mistake rather than a declaration of war.

So, yeah, the wedding dress was a shock. But it gave me a pretty funny memory. No one who attended has ever forgotten it. And, you have to admit, weddings can be forgettable.

Unfortunately, it’s not the only time someone showed up their kid’s wedding in a wedding dress. And most of the mothers-in-law involved were decidedly less innocent than Pennza’s.

Wait. This has happened more than once?

I can top that. My MOTHER did this to me. Turned up in a full lace white dress to my wedding in 2010.
Then she got drunk and lap danced a Roman statue in a fountain. In her white dress. #weddingfail @jimmyfallon

You are not alone. Mine did too. 😂 pic.twitter.com/rwF3KqV4m4

In the end, @DrSpEdinNV may speak for all the nosy Twitter users. She wrote, “I have suddenly become overly invested in women behaving horribly at other women’s weddings and I don’t know why.”

Please tell me there’s video of this. I have suddenly become overly invested in women behaving horribly at other women’s weddings and I don’t know why.