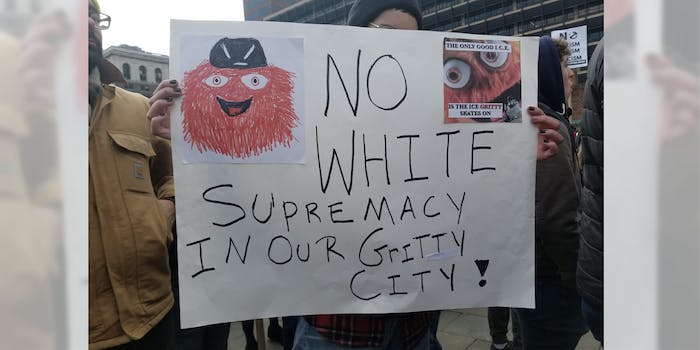 Gritty shows up at Philadelphia far-right rally in full force

In the crowd, one orange face popped up again and again.

Ahead of the “We the People” rally Saturday, organized by far-right groups, counterprotesters had already gathered in Philadelphia’s Independence Mall. In the crowd, one face popped up again and again: Gritty.

The grinning, orange-haired, crazy-eyed monster was unveiled as a mascot for the Philadelphia Flyers in September and quickly became an internet sensation. The character was adopted as an unofficial symbol of antifa and even prompted an op-ed in the Wall Street Journal (that tried to reclaim him from antifa groups).

Per photos posted to social media, Gritty showed up at the “We the People” counterprotest in the form of signs and homemade outerwear featuring the mascot.

Gritty has made an appearance at the Proud Boys protest pic.twitter.com/sFMxRVLPdU

Here’s the scene in Philly. Roughly a dozen people at the far-right rally, with counter protesters on either side. pic.twitter.com/pzvXPth9KV

Cops aren’t letting media anywhere near the far right rally, so here’s another Gritty from the counterprotest. They love him! pic.twitter.com/9UMhfMPrJ3

some amazing handmade gritty swag at the counter-rally today. "All I know how to do is crochet and protest Nazis." pic.twitter.com/t9wWjhb2WX

Some had already used the Gritty spirit to denounce the rally in the days building up to it.

Philly! Call Andrew McDougall of the Independence National Historical Park who approves Special Use Permits: (215) 597-9205 and demand he pull the permit for We The People rally Saturday at Independence Hall. Call out #Fascism. #HateOutOfPhilly #PushbackCampaign pic.twitter.com/R7Td1KW911

A bunch of nazi scum and racist clowns are apparently coming to Philly on Saturday to hold a hate rally in front of the Museum for Jewish American History… GRITTY DOES NOT ABIDE #Gritty #philly #grittydoesnotabide #Grittynolikenazis pic.twitter.com/iOYHngEJpJ

While Gritty’s presence at the protest wasn’t an official showing with the Philadelphia Flyers, the mascot has the support of the Philadelphia City Council as, not only antifa, but a “non-binary leftist icon.” So far, he’s living up to the name.