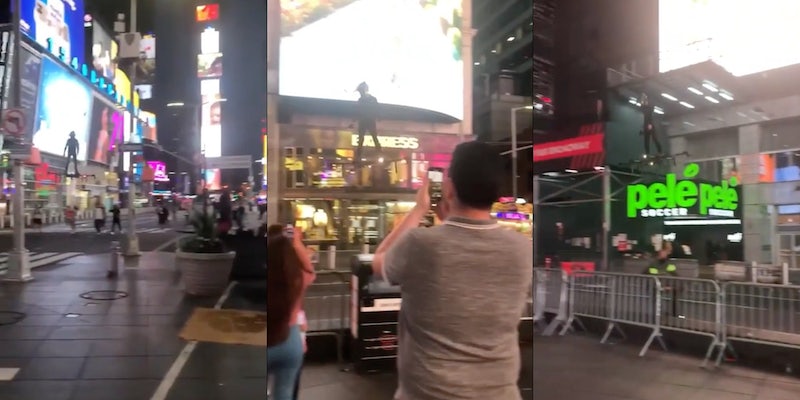 New York City has seen a lot of interesting characters, but a man hovering around Times Square could be one of the most interesting ones as of late. Folks on the internet are calling him the Green Goblin.

Twitter user Rex Chapman tweeted a video of the man riding a hoverboard, saying, “Oh nothing – just a dude flying around NYC…” The tweet has accumulated about 2.2 million views and over 71,000 likes. The flying man has not yet been identified.

Some say the man’s helmet looks like Loki’s, while others agree he bears a striking resemblance to the Green Goblin, a fictional supervillain who appears in the Marvel Comics as one of Spider-Man’s nemeses.

“So…we’re just gonna kick back while the next green goblin is in training,” one user tweeted.

“Someone better step up [and] let yourself be bitten by a spider real quick,” another user cracked.

“OK we’ve got the Green Goblin. Does this mean some Queens kid was just bitten by a radioactive spider?” someone said, again referencing Spider-Man.

Others are disappointed that the man did not fully embrace the opportunity to become the renowned villain.

On Reddit, u/TheAtheistArab87 posted the video in the r/publicfreakout subreddit, where viewers found it less humorous.

“So man can fly around like green goblin but I can’t use my drone where I like,” one person complained.

Another person pointed out public safety, “Man usually I’m all for people doing whatever the hell they want, but seeing this operating around that many non consenting people makes me a bit hesitant. Maybe he’s in a controlled area but I would be upset if I just saw some random Joe hovering around my city on one of these.”

“FAA has entered the chat,” someone else said, meaning the Federal Aviation Administration.

Regardless of public safety or how long he’ll be able to hover, one thing is clear: NYC is back to normal.