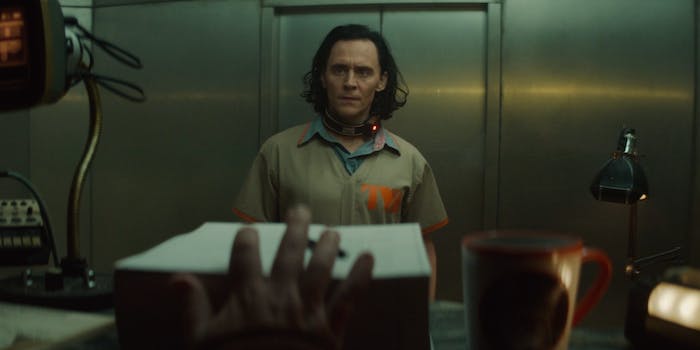 'I guess with the success of the show they’re cracking down.'

Update 2:56pm CT, June 24: When reached for comment, Redbubble told the Daily Dot in a statement that the “removal of the design was an error” and that it has since been reinstated.

“Redbubble’s proactive screening measures take into consideration available information from rights holders on how to detect unauthorized content in designs uploaded to our marketplace. Sometimes, despite our efforts to avoid it, designs that should not have been removed mistakenly get flagged during the screening process. We always encourage our artist community to send us counter-notices when they think we’ve gotten something wrong, so we can promptly fix it,” the statement continued.

Original story: Disney may be trying to claim copyright on images and merch of Loki.

These recreations aren’t just of the witty Marvel Cinematic Universe character who appears in a new Disney+ program. Even art specifically of the Norse deity, which predates the MCU character by a handful of centuries, could be claimed, according to an artist who posted a takedown notice of their Loki art from Redbubble.

Redbubble, a platform which allows artists to sell their work on stickers, T-shirts, coffee mugs, and other items, sent an email to Twitter user @YourBoswell letting them know that a design they had uploaded was being removed from the platform because “it may contain material that violates someone’s rights.”

“The owner of these rights has provided us with guidance describing the type of content they consider infringing that should be removed from the marketplace,” the email continues. “In most cases, this means that the rights holder did not specifically identify your work for removal, but that Redbubble has detected potential similarity between your removed work and one or more words, phrases or images included in the rights holder’s removal guidance.”

The rights holder, in this case, is indicated to be Disney Enterprises, Inc. The art in question is green lettering that says “Low Key,” which is titled “Low Key Loki.”

This is causing some online to worry, as Loki is not just a character created by Disney or Marvel, but also a centuries-old deity still worshipped in the modern day.

@SoftThors pointed this out, stating that they hate the company for trying to claim a character older than the studio itself.

“oh for FUCKS sake,” @SoftThors wrote. “Ridiculous. So not even mythology Loki is allowed bc Disney owns that too apparently. I hate that company so much it’s ridiculous that I enjoy their movies and series so much I HATE THEM.”

The creator of the artwork and sharer of the email, @YourBoswell, said the removed work had been on the platform for years.

“It’s been up for years and it’s a comic reference, simple text art I made for cosplays,” @YourBoswell wrote. “I even made sure the color and font were different But I guess with the success of the show they’re cracking down. I’m gonna appeal it when I’m more awake. If I change the name, maybe.”

Another Twitter user commented on the action, saying that it was “so messed up,” to try and claim depictions of the deity under copyright.

“Just want to warn all my occultists out there that @Disney is coming for anything that has to do with Loki, who is still worshiped as a deity by many of us,” @WishMage wrote. “Not only that, but the phrase ‘low key’, apparently. They’ve decided to claim the deity is their IP which is SO MESSED UP.”

It’s unclear if Disney is trying to trademark the Norse mythology of Loki or if Redbubble was just being overly cautious in its enforcement of Disney’s guidance. However, it wouldn’t be the first time the entertainment company has tried to copyright something with public domain precedent. Disney previously attempted to copyright Día de los Muertos ahead of its animated feature Coco, which prompted public outcry as the holiday has been celebrated in Mexico for hundreds of years.

The Daily Dot has reached out to Disney and Redbubble regarding these claims.