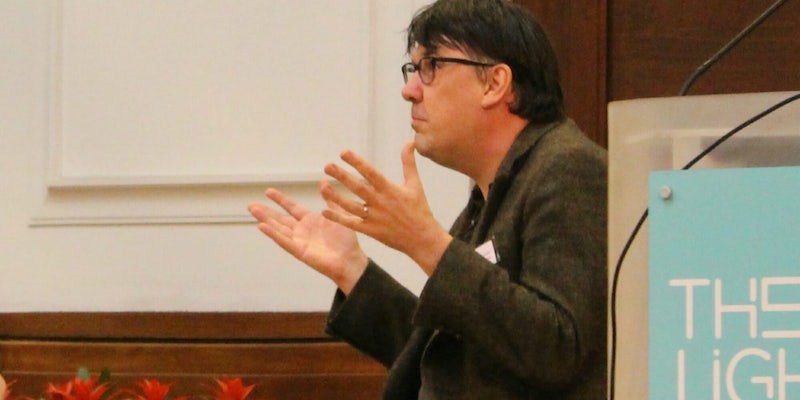 Graham Linehan gets roasted after his bizarre, transphobic tweetstorm.

The IT Crowd creator Graham Linehan has soured his reputation over the past year thanks to his rampant transphobia. First it was a lawsuit for reportedly harassing and doxing a trans woman, then he led a campaign to pull funding from the trans youth charity Mermaids.

Linehan’s hot take came up after he attacked Muslim transgender woman writer Alice Caldwell-Kelly, who is also the creator behind the viral Twitter bot @sextsbot. After Caldwell-Kelly and Linehan entered an online fight over whether Linehan identifies as bisexual or not, Linehan penned a lengthy transphobic and Islamaphobic thread targeting Caldwell-Kelly. In the thread, Linehan repeatedly attacked Caldwell-Kelly, claiming she “appropriated womanhood,” posting her pre-transition photo from her 10-year challenge, suggesting she was appropriating her Muslim religion and claimed her gender identity was merely a “racist fetish.”

After Linehan screengrabbed a tweet from Caldwell-Kelly’s timeline in which she said she would “nut so hard I would shoot a hole through the international space station,” one user asked Linehan, “Do women ‘nut?'”

The dunks practically wrote themselves.

“This is the greatest self-own I have ever witnessed,” wrote user @FalafelFlof.

It seems Linehan was trying to suggest trans women cannot “nut” because he believes trans women’s orgasms aren’t women’s orgasms if they still have their birth genitals. That makes no sense because trans women are women, regardless of their genitalia, hormones, or how they have sex. Any way a given trans woman orgasms is perfectly womanly in its own right.

Then there’s the whole etymology behind the term “nut.” As a slang term, “nut” originally referred to a cisgender man orgasming, but it’s since become a catch-all term for any kind of orgasm a person has, including women. Linehan was probably trying to take a shot at Caldwell-Kelly for using the term to describe her own body, but instead, he essentially suggested all women cannot orgasm at all.

In an interview with the Daily Dot, Caldwell-Kelly explained that her post about “nutting” was “pretty clearly a self-deprecating joke.” She also found it humorous that, even though Linehan is “allegedly a professional comedian,” she had to explain the joke was poking fun at herself.

“The actual ‘women can’t nut’ post came right in the middle of all that, and I was kind of just making fun of him and watching him get more and more mad,” Caldwell-Kelly told the Daily Dot over Twitter DM. “I get what he means, it’s just regular shitty ‘women can’t have dicks’ stuff, but also he is an old man who is bewildered by our modern world and our language, so, unintentionally, he says the funniest possible shit.”

Linehan is so upset with her that he has resorted to “comparing me to Jimmy Savile to however many hundred thousand people,” she explained. She stressed that if she had the resources to do so, his ongoing harassment is “something I’d be taking legal action over.”

“The weird thing is that he keeps escalating,” she told the Daily Dot. “It’s concerning enough that you start thinking, ‘do I need to go to the cops about this?’ Which also would not be the first time.”

She also points out that Linehan’s behavior doesn’t just hurt her, it also targets trans people of faith. His behavior invalidates their identities and trivializes their religious journey.

“A lot of the supportive messages I’ve gotten have been from people who have become or stayed religious, not just Muslim, after transition who he’s really hurting here,” Caldwell-Kelly told the Daily Dot. “Applying that old idea of inauthenticity to trans people really hurts all the more so when it’s about something like that.”

Fucking godtier self own my dude

@Glinner I feel so sorry for your wife then…

"not in my experience"

One Twitter user even calculated the physics involved to shoot a hole through the international space station by nutting. Here’s the math:

This reporter is blocked by Linehan on Twitter. However, we’ve reached out as well.