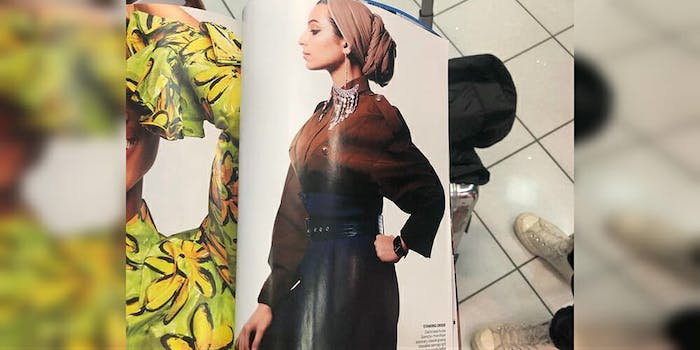 It mistook 'Crazy Rich Asian' actresses for other famous Asian-Americans.

Vogue has been called out again for misidentifying famous women of color—this time, in its red carpet pics.

Journalist and activist Noor Tagouri tagged Vogue magazine in a tweet on Sunday, the night of Screen Actors Guild Awards, with a critique of its coverage: It completely misidentified two Asian-American actresses on its site.

Both of these women have been misidentified on your site tonight.

Sometimes mistakes happen. But sometimes when a mistake becomes a pattern, it’s important to interrogate why.

Tagouri knows all too well that this is not the first time Vogue has mistaken identities—and just within the past two weeks. On Jan. 17, she posted a video of her taking a first look at the February issue of the magazine, which she had done a photo shoot for several months prior. The video starts with Tagouri giggling and excited as she opens the magazine and looks at her picture. As she looks closer at the page, however, she sees that she’s identifed as a completely different person.

I’m SO heartbroken and devastated. Like my heart actually hurts. I’ve been waiting to make this announcement for MONTHS. One of my DREAMS of being featured in American @VogueMagazine came true!! pic.twitter.com/0lzPJoDn9v

“My heart actually hurts. I’ve been waiting to make this announcement for MONTHS,” Tagouri wrote on Instagram. “I was misidentified as a Pakistani actress named Noor Bukhari.”

Unfortunately, this was not the first time this happened to Tagouri. “I have been misrepresented and misidentified MULTIPLE times in media publications—to the point of putting my life in danger. I never, EVER expected this from a publication I respect SO much,” she wrote.

Vogue issued an apology on Twitter a few hours after Tagouri posted her video, saying, “To have misidentified her is a painful misstep. We also understand that there is a larger issue of misidentification in media—especially of nonwhite subjects. We will try to be more thoughtful and careful in our work going forward.”

Hua’s and Chan’s names have also since been corrected in the slideshow Vogue published, but it is a reminder that there is more work to be done—perhaps starting with hiring more people of color.

The Daily Dot has reached out to Tagouri for comment and will update with her response.