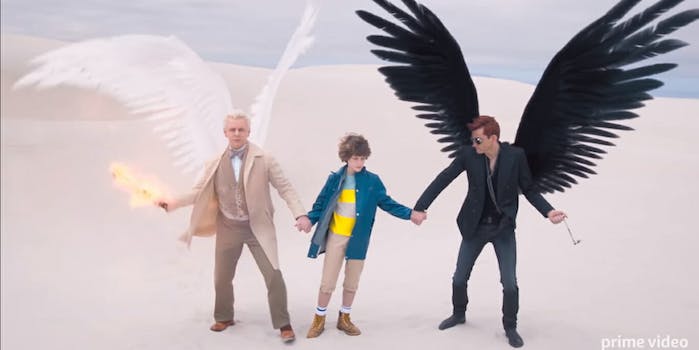 The petition contains more than 20,000 signatures.

More than 20,000 people have signed a petition calling for the cancellation of Good Omens, the television adaptation of Terry Pratchett and Neil Gaiman’s beloved book. Unfortunately, the petition is directed at the wrong company.

The demand to “cancel blasphemous Good Omens series” was made to Netflix, but the series is actually made by Amazon Prime.

A Christian campaign called Return to Order is assembling signatures for the petition. The campaign, based around a book of the same name, aims to return America to an “organic Christian society.” According to its website, the campaign’s ultimate goal is “a return to those God-given institutions and principles that naturally regulate society and put it back in balance.”

The petition is hosted on the Return to Order website and has racked up 20,056 signatures as of this writing. It takes issue with many of the themes and characters in Amazon Prime’s six-part series. It takes shots at the relationship between Crowley, a demon, and Aziraphale, an angel. The petition’s creators rally against God being voiced by a woman and the antichrist’s portrayal as a normal kid. It calls the series “another step to make Satanism appear normal, light and acceptable.”

At the end of its plea for signatures, the petition reads: “Please sign our petition, telling Netflix that we will not stand silent as they destroy the barriers of horror we still have for evil.” While 20,000 signatures are likely not enough to convince any network to cancel a widely popular show, they certainly won’t do the trick when directed at the wrong one.

Gaiman, who began the process of creating the series at Pratchett’s request, caught wind of the petition online. He flawlessly trolled the campaign in several tweets. “I love that they are going to write to Netflix to try and get Good Omens cancelled. Says it all really,” he wrote on Wednesday.

I love that they are going to write to Netflix to try and get #GoodOmens cancelled. Says it all really. https://t.co/8WNxCY1YmV

This is so beautiful… Promise me you won't tell them? https://t.co/thYTOG7GBE

Many religious people came out in support of the series after the petition came to light. “As a Catholic I enjoyed the book and am enjoying the television series very much,” one viewer tweeted. “Good Omens is extraordinarily good. I’m so sorry religious fanatics seem determined to spoil the fun for everyone else.”

Some of the book's biggest proponents have been Catholics, the literate kind. But there are bad apples everywhere.

Speaking as a bible reading Christian, I love this show. Best thing on TV since the apocalypse….. oops!

Life keeps handing us delightful stories like these. Not to insult anyone or their faith. But to demonstrate blind fury or rage is mostly a knee jerk and never thought through. I thought religious morals were to turn the other cheek and let faith guide you. Hate is never worth it

Return to Order has not responded to the petition, nor has the organization changed the language to direct ire toward Amazon Prime, rather than Netflix. On the bright side, Good Omens is nowhere to be found on Netflix, so maybe the petition was successful after all.