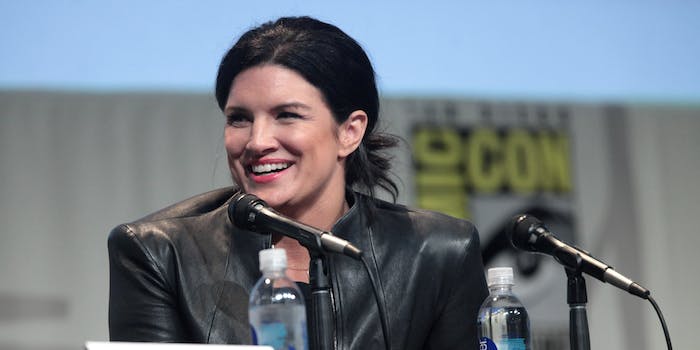 Her conservative fans caused #CancelDisneyPlus to trend in response.

Carano, who played former Rebel shock trooper Cara Dune on the show, made an offensive comparison between the murder and oppression of Jewish people in Nazi Germany and the experience of being hated “for political views”—implying that American conservatives are experiencing attacks on the same level as the Holocaust. This is the latest in a long string of offensive statements from Carano.

In a statement to io9, a Lucasfilm spokesperson confirmed that Carano would no longer appear in The Mandalorian or other Star Wars spinoffs. “Gina Carano is not currently employed by Lucasfilm and there are no plans for her to be in the future,” they said. “Nevertheless, her social media posts denigrating people based on their cultural and religious identities are abhorrent and unacceptable.”

This suggests that a decision had already been made behind the scenes, but Lucasfilm chose to clarify this publicly due to Carano’s anti-Semitic Instagram post. Until recently, there was still a lot of speculation about whether she’d star in the upcoming Star Wars spinoff series Rangers of the New Republic.

According to The Hollywood Reporter, this was actually in the cards until last November, when Carano’s controversial tweets began to make numerous headlines. The show’s creators deemed her an inappropriate choice to lead a Star Wars series, so Rangers will go ahead with different stars.

Carano’s Twitter posts have grown increasingly radical over the past year. She’s shared alt-right conspiracy theories about the election, mocked people for wearing masks during the pandemic, and supported racist tweets from other accounts. For many fans, alarm bells began to ring last September when Carano made fun of people sharing their gender pronouns on social media.

This created a public divide between Carano and The Mandalorian‘s lead actor Pedro Pascal, who publicly supports LGBTQ rights and whose sister recently came out as transgender. So Carano’s politics and Twitter trolling were already common knowledge among Star Wars fans when Vanity Fair published an article about her in November. Following Wednesday’s Instagram post, she’s also been dropped by her talent agency, UTA.

Carano’s firing has already inspired sympathetic messages from right-wing figures like Jack Posobiec and Paul Joseph Watson, along with an outpouring of support from the conservative fanbase she’s cultivated online. #CancelDisneyPlus is currently trending on Twitter as a result, but as is often the case with this sort of thing, the hashtag is now full of people disagreeing with its original message.

Carano hasn’t directly addressed Disney’s decision to terminate her role as Cara Dune, but her recent tweets make her position clear. Those include a meme reading “Epstein didn’t kill himself” and an announcement that she’ll appear on a podcast for conservative Christian news satire site the Babylon Bee. It seems likely that after the implosion of her acting career, Carano may embrace a new role as a right-wing pundit.