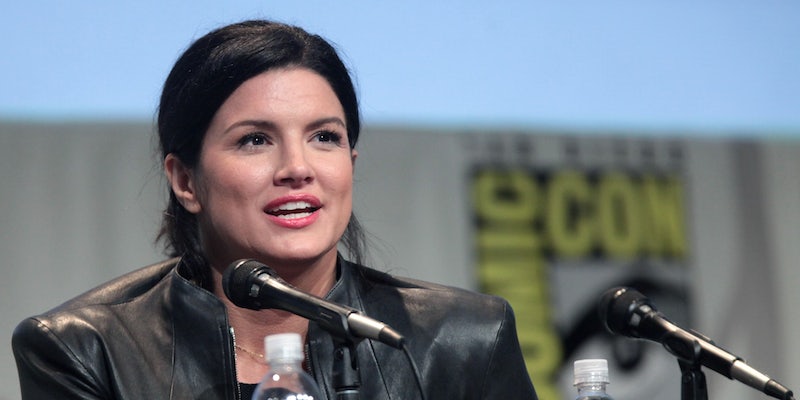 She seemingly mocked people who put pronouns in their Twitter bios.

Best known for playing Cara Dune in The Mandalorian, actress/MMA fighter Gina Carano is starting to attract attention for her controversial Twitter presence. Recently she’s inspired criticism for sharing anti-mask memes, retweeting right-wing opposition to Black Lives Matter, and mocking the practice of sharing your pronouns on social media. At the moment her Twitter name is “Gina Carano boop/bop/beep,” an obvious contrast to the way her Mandalorian co-star Pedro Pascal included his pronouns (“he/him”) on his own profile.

When questioned about why she chose to put “boop/bop/beep” on her profile when so many people interpret it as a transphobic dogwhistle, Carano replied that she opposes bullying in any form. She also said that Pedro Pascal had explained the pronoun issue to her, but she had no intention of putting them on her own bio. (There’s no real pressure for public figures to share their pronouns on social media, although it’s an increasingly common practice among younger LGBTQ+ people and allies.)

Carano hasn’t explicitly spoken out against trans rights, but she frames the issue in a similar way to many transphobic women online: accusing a “mob” of trying to bully her into taking a stance. However, putting fake pronouns in her bio isn’t a neutral response. When people share their pronouns on social media, it’s a simple courtesy to let people know how to refer to them. But transphobic commentators have latched onto this as an easy target for harassment, sometimes putting fake neopronouns in their own bios to make fun of trans and nonbinary people. Carano’s “boop/bop/beep” screenname is identical to this kind of transphobic joke. A truly neutral response would be to put nothing pronoun-related in her bio, which is what most Twitter users do anyway.

To those who only know Carano as the actor behind a cool Star Wars character, it’s a surprise to see her promoting right-wing talking points like telling people to “open up your businesses & churches” during the pandemic. She also retweets content from alt-right figures like Ian Miles Cheong and conspiracy theorist Jack Posobiec. Much like J.K. Rowling, she publicly tries to maintain a “both sides” image while privately liking tweets with more obviously extreme values, i.e. complaints about a “marxist free speech mob” or criticisms of the Black Lives Matter movement.

Carano’s social media presence feels similar to other celebrities who have gradually publicized their support for conspiracy theories or far-right viewpoints. For instance many casual followers will see the “boop/bop” thing as a stupid joke, but to people in the know, it sends an obvious message while maintaining plausible deniability. Likewise, Carano frames herself as a neutral party who believes in personal freedom… but this includes supporting people who choose not to wear masks during a pandemic, endangering those around them. This kind of comment is quickly making Carano a controversial figure among Star Wars fans, prompting suggestions that she be replaced in the next season of The Mandalorian.