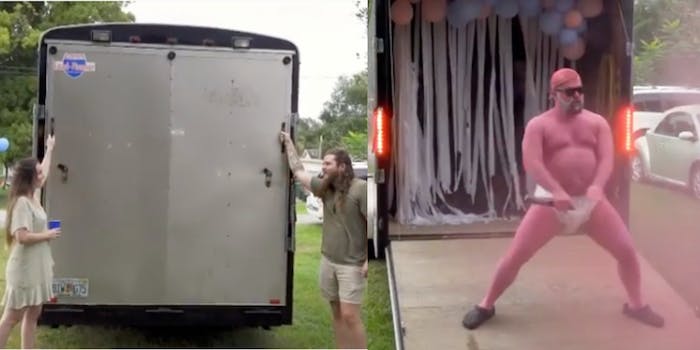 Gender reveal goes viral for unlikely reason—people actually like it

As opposed to previous viral gender reveals that include thousands of acres of wildfires, oddly colored lasagna, or $8 million in damages, a recently shared video shows perhaps one of the most genuinely hilarious gender reveals to date, and spectators love it.

Despite consistent pushback on reinforcing typical gender roles, and the originator of the idea expressing that the events have gotten “out of control,” the trend of gender reveals has grown massively popular in recent years, with the idea being to bring family and friends together with creative ways of announcing the gender of an expecting couple’s future child. Plus, videos taken at the event are almost always begging to go viral online.

Instagram user @superhooper uploaded a video showing his own hilarious gender reveal event. The video shows him and his wife opening the back of a truck to unleash a dancing, diaper-clad man painted in pink, as pink smoke seeps out of the trunk, signifying that they’re having a girl. “You’re having a girl,” the man shouts as he jumps around hugging the couple.

“We’re having a girl!!!!! Sorry future Adah that you have to see this,” wrote @superhooper in the video’s caption.

The video has been viewed nearly 10,000 times and liked nearly 500 times since it was posted. It was also shared numerous times on Twitter and Reddit. One viewer commented, saying that it was the “best gender reveal yet.”

The video was well-received by others as well, with one user writing, “Y’all win for most unique and hilarious gender reveal.” One user also called the gender reveal one of the most “terrifying and hilarious things ever,” while another replied, saying, “If this ain’t my gender reveal I don’t want it.”

Luckily, nothing was set on fire in the making of this gender reveal.