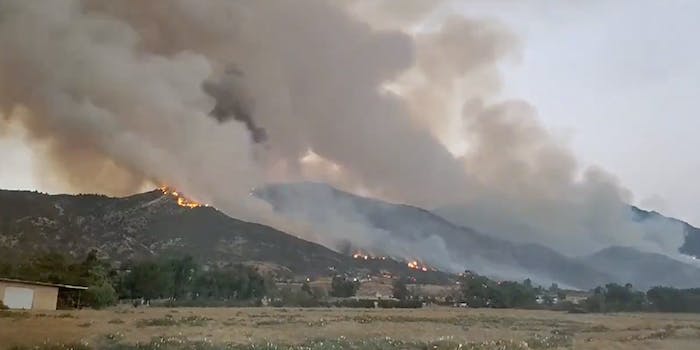 The fire was allegedly caused by a device that was supposed to produce colored smoke.

A California wildfire that had spread to more than 7,300 acres by Monday morning was caused by a gender reveal gathering, according to an ABC 7 news report. The San Bernardino Sun reported the photo shoot that was supposed to reveal the gender of a baby involved “a small cylindrical device that burns chemicals to produce colored smoke ignited the grass.”

The fire’s containment near Yucaipa, about 70 miles east of Los Angeles, is currently listed at just 7%.

In a statement released on Sunday, the California Department of Forestry and Fire Protection reported the cause of the El Dorado fire to be a smoke-generating pyrotechnic device used at the gathering. “The fire began at 10:23am on September 5, 2020 in the El Dorado Ranch Park in Yucaipa,” they wrote. “The fire spread from the park to the north on to Yucaipa Ridge that separates Mountain Home Village and Forest Falls from the City of Yucaipa.”

Gov. Gavin Newsom has officially declared San Bernadino County under a state of emergency, as well as four other California counties that are currently under states of emergency following extreme heat and wildfires, ABC reported.

The outbreak of fire has now also caused road closures and mass evictions. Evictions were ordered for counties including Oak Glen, Mountain Home Village, Forest Falls, and parts of North Bench Yuciapa, according to the San Bernadino National Forest. A community evacuation center has been set up in the Oak Glen Yucaipa Community Center.

More than 600 personnel were deployed to aid in alleviating the fire, including multiple helicopters, fixed-wing aircrafts, and engines.

No injuries or charges have been reported surrounding the fire and reports on the amount of damage caused have yet to be released.

Within the last month alone, 1.5 million acres have been burned in California by upward of 900 wildfires.