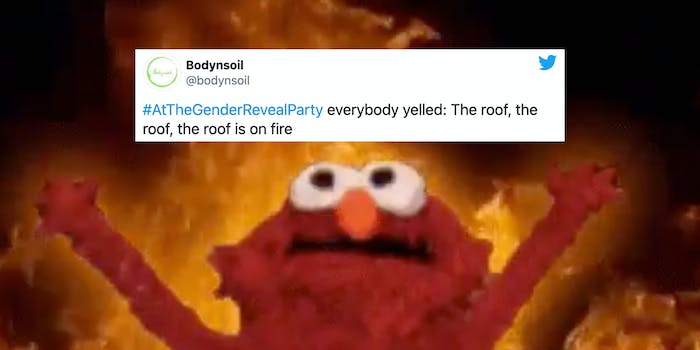 'We watched the world burn because we didn't care about nature.'

In a twist that fits right into 2020’s series of events, it was reported this weekend that an explosion at a baby gender reveal party started a massive fire in California’s San Bernadino County. Days later, people are making memes about the incident.

#AtTheGenderRevealParty was trending on Twitter on Wednesday with users playfully speculating what could have gone down to spark over 10,000 acres of scorched land.

According to CNN, as of Tuesday morning, the fire was 16% contained, with officials calling it one of the “most dangerous” they’ve seen in the area.

The memes ranged from the classic pizza fire GIF from Community to the old-school Snuggie commercial that features a white family wearing Snuggies and “raising the roof” around a campfire.

For many, the sad underlying reality of the jokes was the fact that a gathering organized against social distancing guidelines was the source of continued destruction of the environment.

And for others, the fire spoke to a wider critique on the practice of elaborate gender reveal parties.

“Why does everyone find it necessary to go all out for a gender reveal?” one Twitter user wrote. “Like jessica i came here to see the gender of your baby, not the west coast burn.“

California is facing at least 22 major wildfires catalyzed by dry air and record heatwaves and causing mass evacuations. Over the last 30 days, California has seen over 900 fires of similar nature, and over 1.5 million acres have burned.

Meanwhile, as intense heatwaves continue blaze the west coast, Bay Area residents have begun sharing images of orange skies resulting from smoke run off from August fires. According to the San Francisco Chronicle, layers of ash and smoke are now drifting to surface level elevations, which makes for the orange-red hues depicted in the photos shared by residents.

The haunted images are a far cry from baby pink or blue.