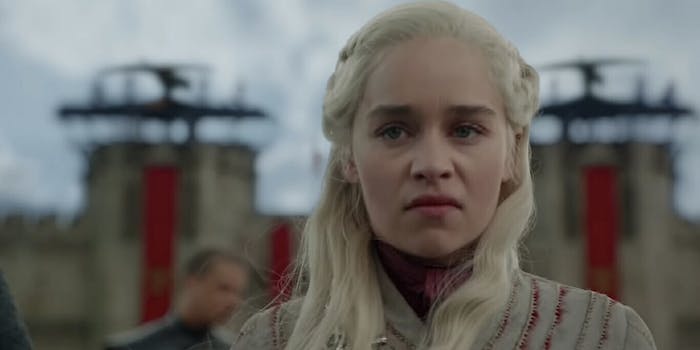 After the latest 'Game of Thrones,' fans are out for blood.

Warning: This article contains spoilers for Game of Thrones episode, “The Last of the Starks.”

If there’s one thing Game of Thrones has become really good at, it’s playing with fans’ emotions—and breaking their hearts when they least expect it. After a victorious third episode that ended with the Night King, White Walkers, and Army of the Dead gone forever (or are they?) and left fans euphoric, season 8’s fourth episode angered fans for many reasons—and prompted a deluge of angry reactions and memes.

Twitter user @Fabbyulous23 captured everyone’s feelings of being “personally victimized by Game of Thrones” after all the bad things that went down in this episode: “Everyone tonight after watching Missandei be executed in front of Grey Worm, Rhaegal shot down, Varys conspire against Dany, Jon send Ghost away without saying goodbye, Jamie [leaves] Brienne for Cersei, and Dany [lost] almost everything she has.”

But none of them lost more than Daenerys Targaryen has in the span of two episodes.

Everyone tonight after watching Missandei be executed in front of Grey Worm, rhaegal shot down, Varys conspire against Dany, Jon send Ghost away without saying goodbye, Jamie leave Brienne for Cersei, and Dany lose almost everything she has: pic.twitter.com/kTMeFeGRei

After losing Ser Jorah Mormont, the entire Dothraki army, and much of the Unsullied to defend Winterfell and the world of the living, Dany now had to cope with the death of yet another one of her dragon children, Rhaegal, and Missandei—her most loyal friend and trusted confidante.

No one in Winterfell even thanked her for everything she has sacrificed, save perhaps for Jon Snow, whom everyone celebrated for being a hero and riding a dragon without so much as a glance at the Dragon Queen.

To top it off, her political advisers Tyrion Lannister and Varys have begun to turn against her because of her Mad Queen tendencies and are now leaning toward backing Jon instead after learning he’s a Targaryen and perhaps the rightful heir to the Iron Throne.

After everything Dany had to endure from the first episode of Game of Thrones to the present, fans are enraged that she’s had to deal with this much of a loss and be painted a villain. If like Varys and Tyrion fans initially had misgivings about Dany burning King’s Landing to the ground in order to take the Iron Throne from the usurper Cersei Lannister, all that’s thrown out the window after Sunday night’s episode.

Fans think Dany has every reason to “lose her shit.”

Stop with the Dany hate. She didn't have to sacrifice her dragons and half her army but she did. Sansa & the North have been nothing but ungrateful and hostile to Daenerys. She just lost her dragon and best friend. She's allowed to be mad. #GameofThrones

Everyone—from Varys and Tyrion to entertainment writers and fans—seem to expect Dany to turn mad like her Mad King father, and Dany supporters are giving her permission to go “full Mad Queen.”

Us: Nah, Dany can't become the Mad Queen and burn innocent people down

Us: BURN THE WHOLE CITY AND THAT BITCH DOWN!!#GameofThrones #DemThrones #GoT pic.twitter.com/cf8z52hxnu

@oceano_sole thinks it makes no sense that “GOT writers trying to make Dany a mad queen … when for the last 7 seasons she’s never demonstrated anything of that sort. How else would you react if two of your children got killed and [your] best friend.”

Ummm the GOT writers trying to make Dany a mad queen makes no fucking sense when for the last 7 seasons she’s never demonstrated anything of that sort. How else would you react if two of your children got killed and you best friend. Me as a queen: BURN IT ALL DOWN. pic.twitter.com/F6T2sDU0Pp

People think Dany should have listened to Olenna Tyrell in the first place, instead of Tyrion who stopped her from attacking King’s Landing.

OLENNA WAS RIGHT FROM THE START dany should’ve listened to her instead of tyrion #gameofthrones pic.twitter.com/fwuM9xf6Gg

Fans are getting behind the Dragon Queen “burning everything to the ground.” The rage is particularly directed at Cersei, who in this episode proved to be ever the monster (as Tyrion should have known all along).

Okay. Words cannot explain how much I want Daenerys to burn everything to the ground.

All chance of civility is gone. Burn. The. Bitch. Cersei. Down.#GameOfThrones pic.twitter.com/8p51wbF8xl

And while we’re all for peace and protecting the people (which Varys and Tyrion are on about), honestly, we can’t blame the fans for crying “Dracarys” and unleashing dragon fire on all.

#GamefThrones When you come over to Westeros and lose half your Unsullied, nearly all your dothraki, two dragons, your two bffs and your council is plotting to betray you and the new lover you lost it all for is your nephew. #dracarys pic.twitter.com/8nRkJfJ03c

People are even posting memes about wanting to help Dany execute this.

if they really gonna make dany the mad queen y’all know imma stan this woman until the very day i die. mad queen indeed. dracarys, bitches. we burning it all down, imma show up to the red keep like pic.twitter.com/8M9SFPflO6

There are memes that capture both the heartbreak of losing Missandei and Rhaegal—and apathy for what happens to King’s Landing.

Fans just want Daenerys and Greyworm to avenge Missandei’s death and “absolutely destroy everyone next episode.”

Me going to bed tonight hoping that Greyworm & Daenerys absolutely destroys everyone next episode #GameOfThrones pic.twitter.com/wVNEk5R5xU

It was frustrating to watch Dany struggle with her next move after Euron Greyjoy struck Rhaegal down, so here’s to hoping that in the next episode, Dany will finally utter to her last living dragon Drogon exactly what Missandei’s last words were: “Dracarys.”

(If the look of alarm in Euron’s face followed by a dragon’s scream is any indication, she just might.)