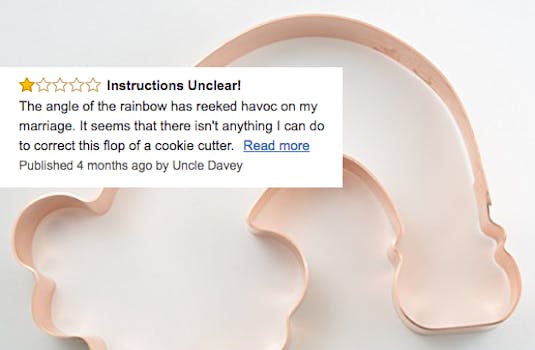 16 hilarious Amazon reviews that are anything but helpful

'591 people found this helpful. Was this review helpful to you?'

You might not believe this, but Amazon has been in the content game since time immemorial. Before it created series like The Man In The High Castle and Transparent, the online behemoth was providing hours and hours of original entertainment through its review section.

For years, people have not only used Amazon‘s review platform as a means to inform fellow consumers about the merits of a product, but they’ve also used the space as a canvas for the absurd and the comical.

The funniest Amazon reviews of all time 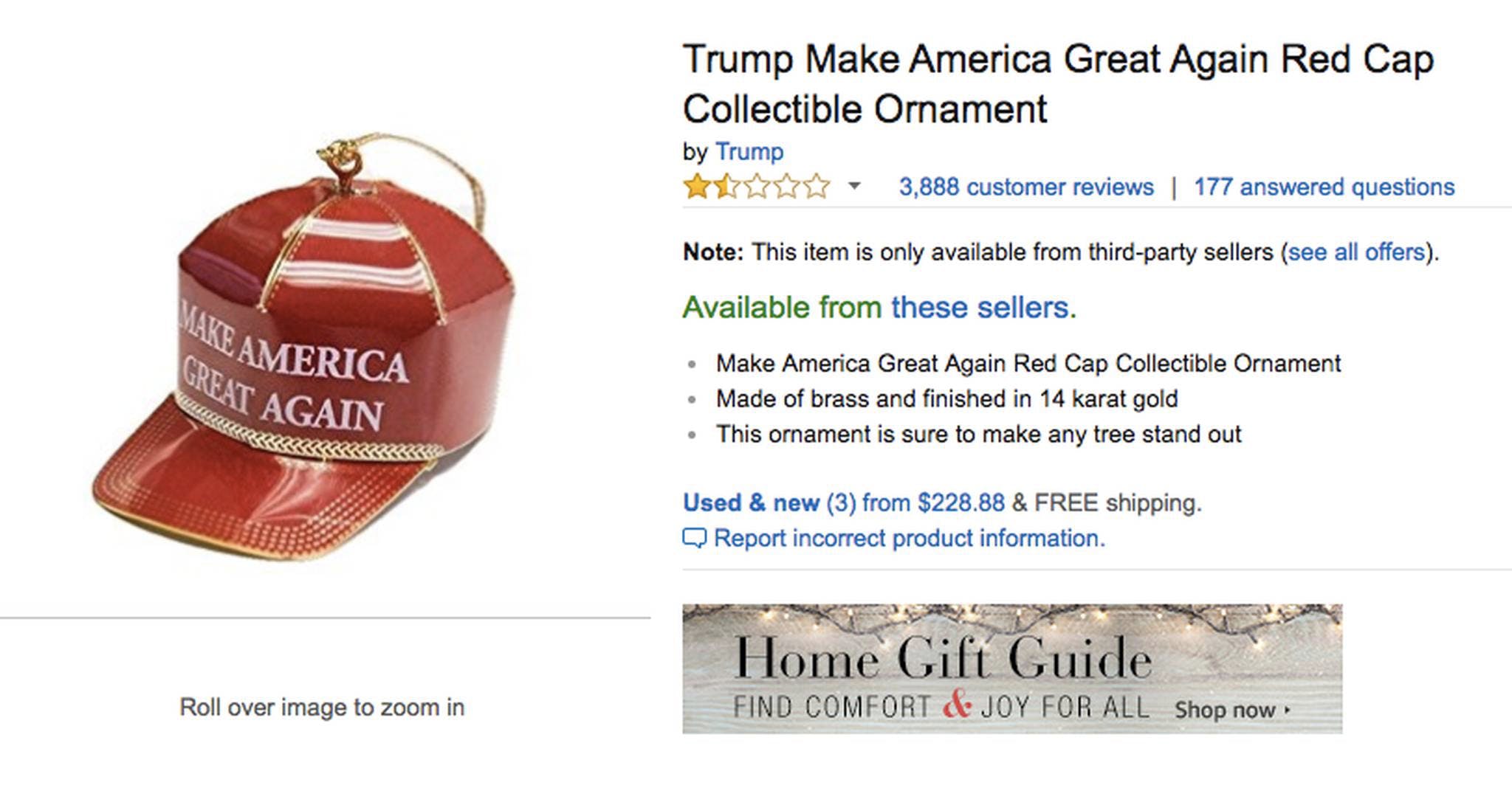 This product might only be a couple of months old, but it’s already accumulated some of the funniest reviews on Amazon. This gold-plated MAGA hat ornament is so hilarious that America’s going to be tired of laughing within the next four years 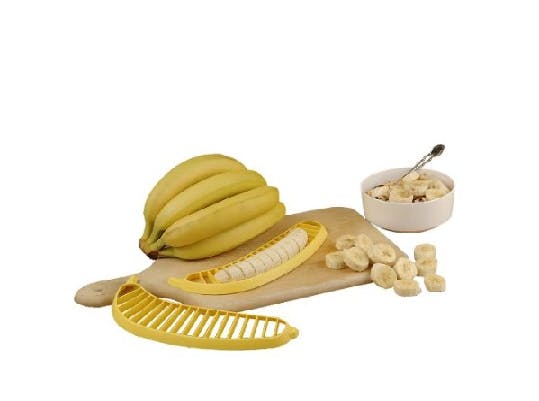 Once in a generation, mankind comes up with an invention that revolutionizes the way we live. The internal combustible engine gave us dominion over this earth. The internet made the planet so small it fits inside your pocket. But no innovation has eased man’s burden more so than the Hutzler 571 banana slicer.

We’re still not entirely sure how or why this magical kitchen utensil drew the attention of the reviewers, but we’re sure glad they took notice. 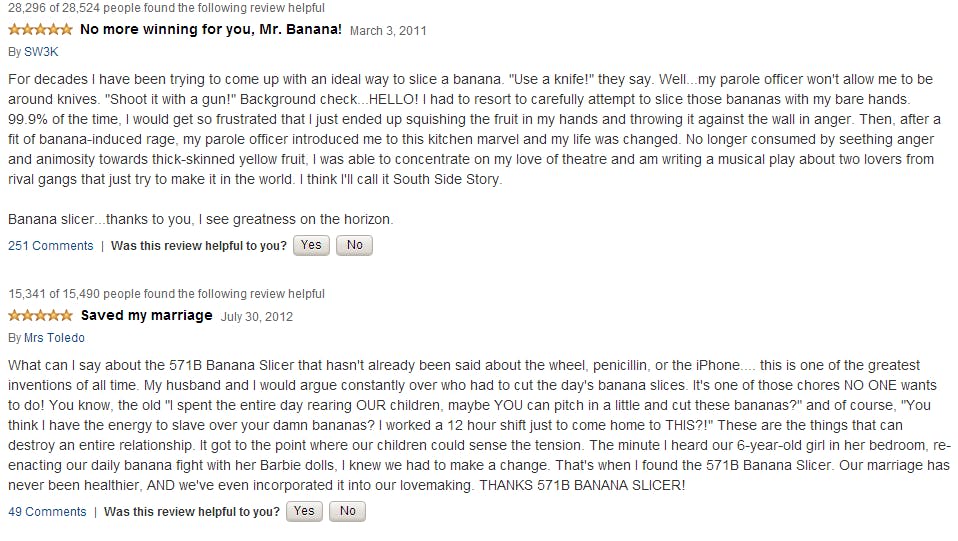 Sometimes the funniest Amazon reviews are the ones where people earnestly complain about being duped. The indignation that comes from someone thinking they bought furniture at a bargain price only to discover that they actually paid for a toy is the stuff that the heartiest laughs are made of. We’re laughing at you, not with you. 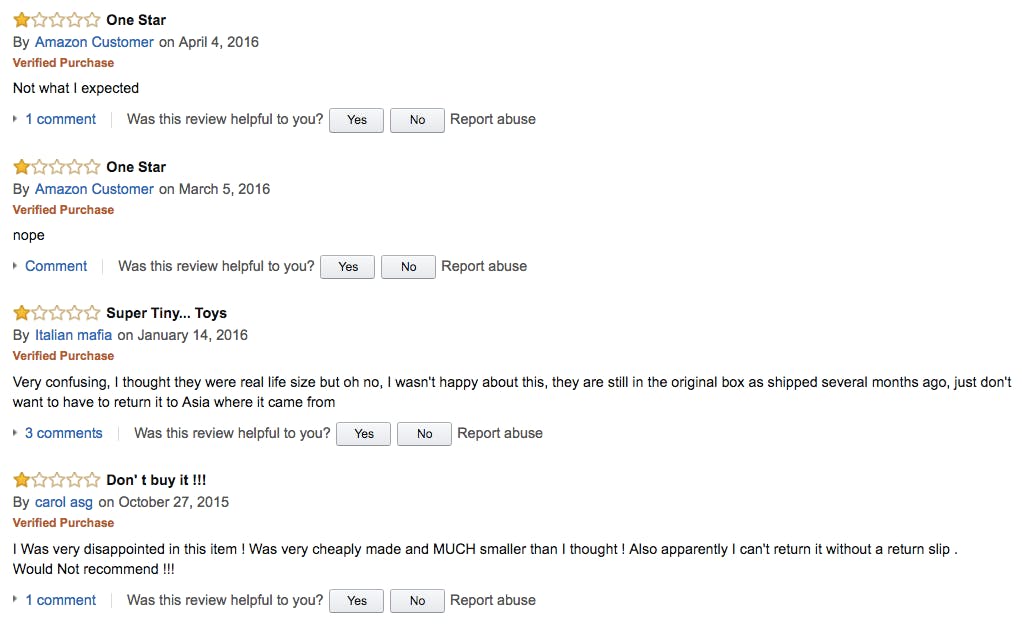 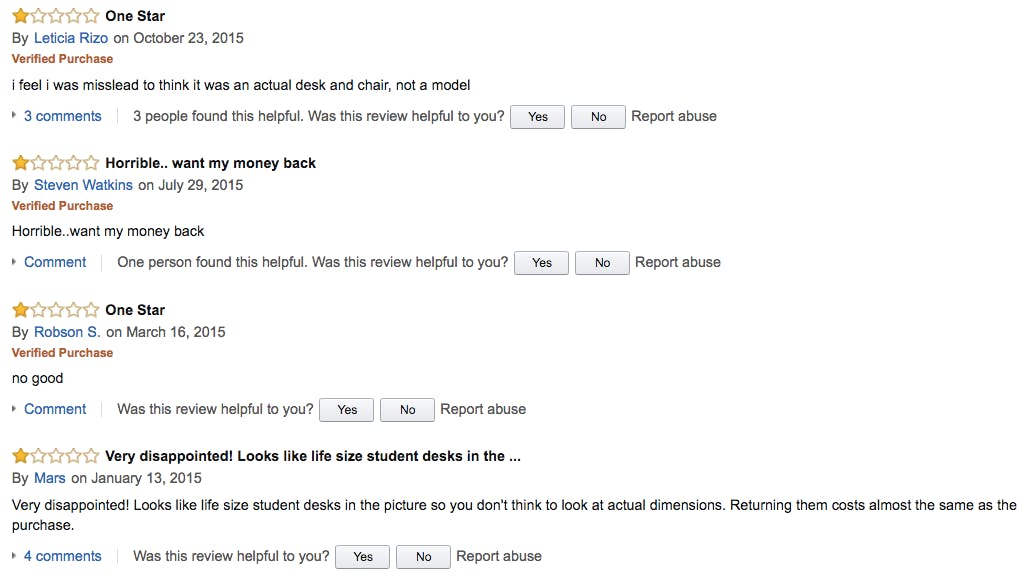 Speaking of earnest reviews, nothing says “buy this now!” more than a product that does exactly what it claims to do. Take this gaming headset, which cancels noise so well that you can’t hear a major crime taking place in your apartment building.

This is an exceptional entrant because, whereas the other picks are about a specific product, this one is about a handful of them. Still, the fact that people vehemently dislike the Air Bud franchise with such a fiery passion that they log on to Amazon to make their displeasure known is reason enough to include it on our list. 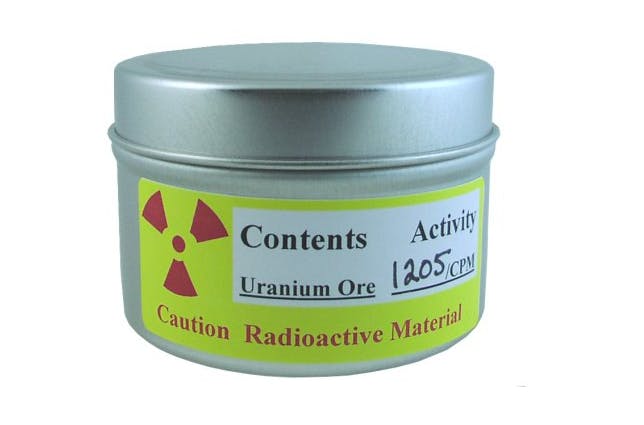 You really can buy anything on Amazon. Also, any product that lets people make a goofy nuclear physics joke and reference Back To The Future—the time travel trilogy that terrifyingly predicted things that turned out to be true—deserves five stars.

The internet is at its best when a seemingly innocuous and innocent image gets roasted for how much it looks like something that’s very much not safe for work. Recent examples include a 6-year-old’s drawing of Santa’s reindeer and McDonald’s ill-advised holiday coffee cup. On Amazon, reviewers had a ball (or two) clowning this cookie cutter, which looks less like a rainbow leading to a pot of gold and more like some dude’s flaccid member. 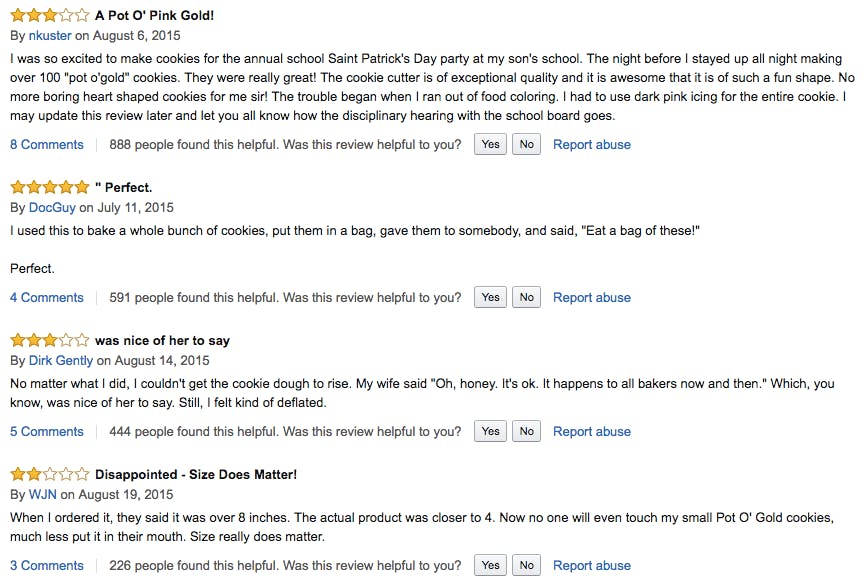 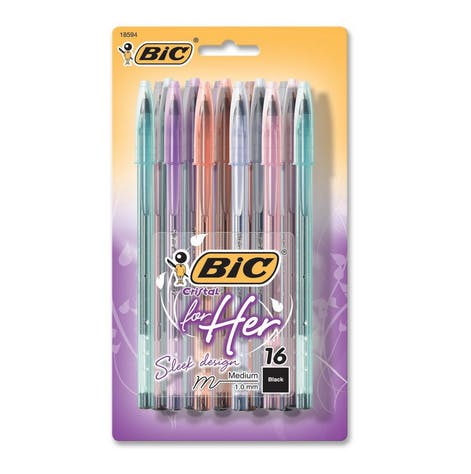 What happens when a company makes a pastel version of its product and tries to market it to women? Clapback in the form of comedy gold. Unsurprisingly, the product is no longer be available on Amazon, but because this is the internet, those reviews are forever. 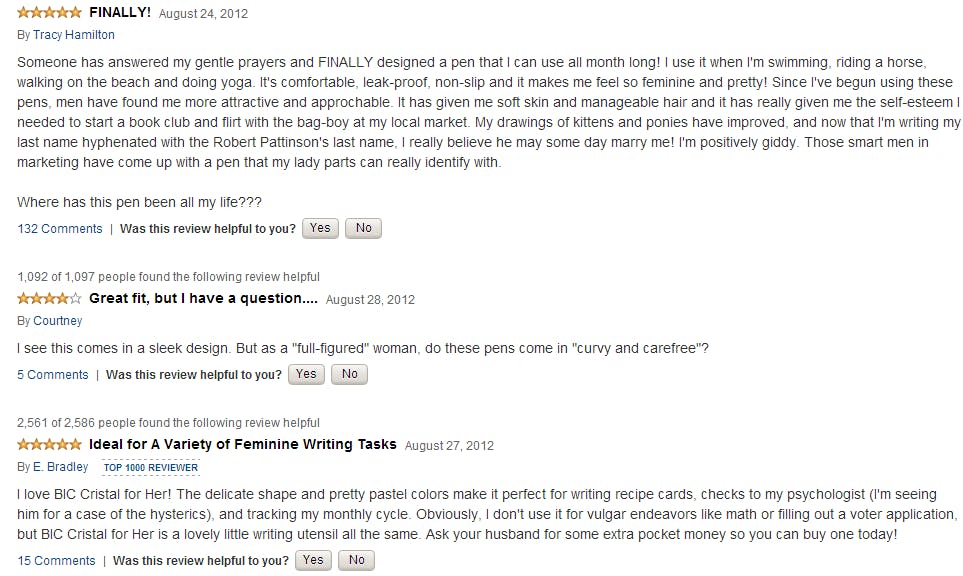 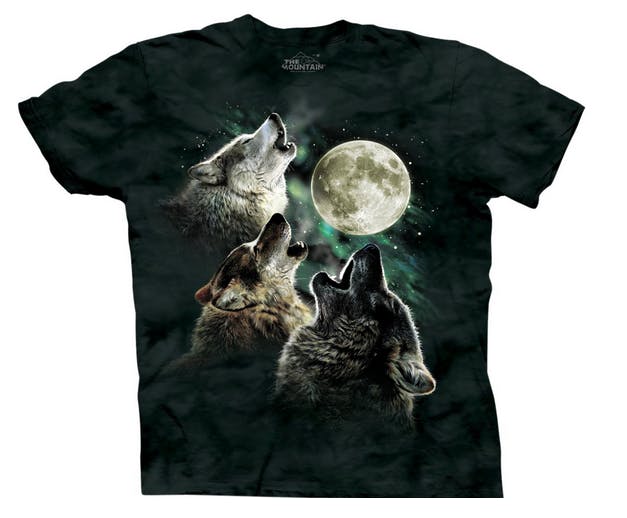 The Three Wolves Shirt is canon. Not just “Amazon reviews” canon, but, like, the whole internet cannon. If the web had an IRL brick-and-mortar Hall of Fame, this shirt would be there, enshrined behind a bulletproof glass case. And right below that case would be this review, three beautiful paragraphs that remind you that we are, in fact, living in the best of times.

Also part of internet lore is the horse head mask. It has a dedicated online cult and a presidential connection. It should come as no surprise, then, that this disguise has been an equine muse to thousands of bards on Amazon. 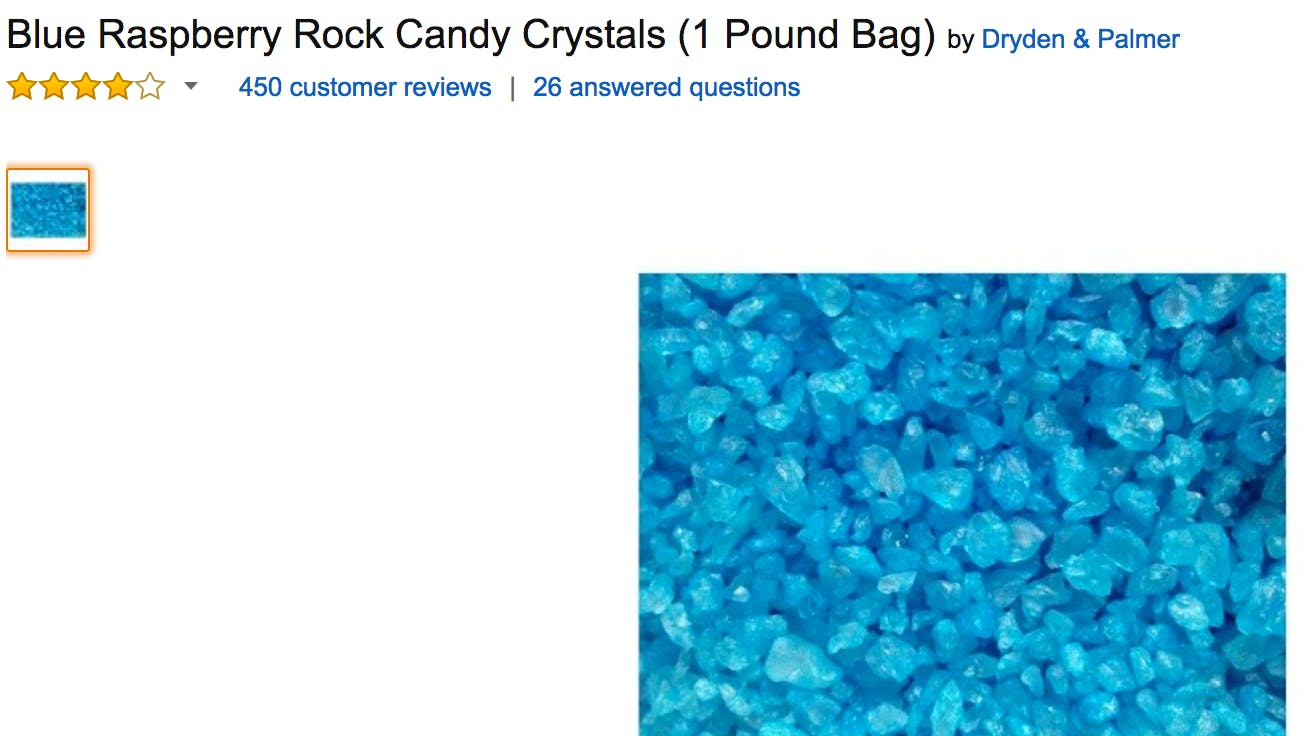 When your product uncannily resembles the blue crystal meth cooked up by Walter White and Jesse Pinkman in Breaking Bad, you best believe that people are going to notice. Some, like drug dealer Tuco Salamanca, will attest to its purity.

Not everyone’s a fan, however. A so-called Heisenberg is less than pleased that Dryden & Palmer, the company behind the candy, are cutting into his turf. 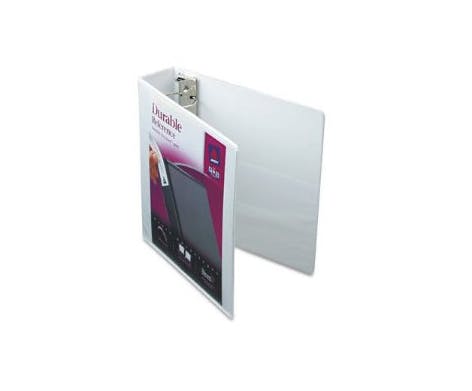 One of the lowest points in Mitt Romney’s 2012 presidential campaign came after he uttered the term “binders full of women.” The GOP candidate used the now-ubiquitous phrase to refer to how he selected female cabinet members while he was governor of Massachusetts. The gaffe may have cost Romney a few votes, but it also spawned a hilarious series of binder reviews. 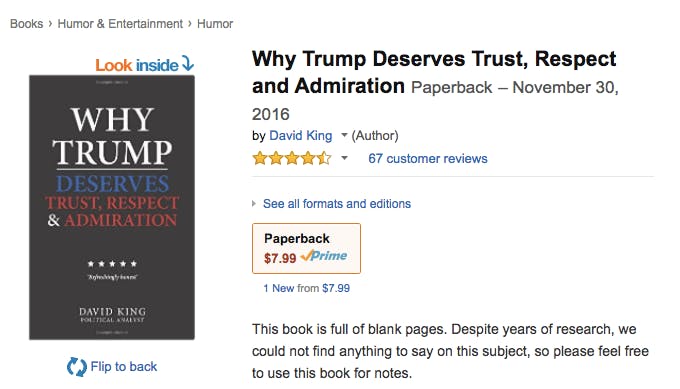 At first glance, it might seem odd that the review section of a book containing a title that lauds the president of the United States would make it on this list. But all you have to do is read the Amazon description to see this tome is just blank pages. Sad!

Given how thin-skinned President Trump has shown to be, he might not like when people poke fun of him. That said, the title does double as a notebook, a deal if we’ve ever seen one. And know one appreciates a good deal better than Trump.

From reading the title of this link cable, one might think reviewers would poke fun at the word “dedicated,” but customers instead concocted stories about the cable connecting them to wormholes and alternative dimensions. It’s almost like you’re reading short fiction in form of content reviews. The manufacturer discontinued the product; it’s now being sold for more than $7,000,000 by a third-party seller.

This first review was written by none other than Star Trek’s George Takei.

It’s a pity the cables aren’t available for a more reasonable price because they seem to do a lot more than intended.

It’s unclear what AutoExec was thinking when creating this work tray, which is intended for drivers to use their laptops, iPads, or pen and paper to do homework while driving. That doesn’t sound dangerous at all!

Who wouldn’t want to order a whole 5-pound bag of gummy bears? The only problem is that these sugar-free gummies also act as a laxative. Titles of the comments range from “There will be blood” to ”More Pleasant Than Taking Miralax.” I guess if you need a laxative, it might as well be tasty. But 5 lbs might be a little much.