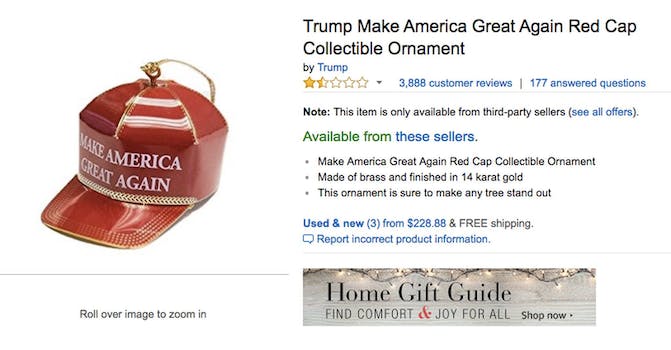 Trump’s MAGA Christmas ornament is getting roasted on Amazon

'The angel on top of my tree just hired a lawyer.'

The holiday shopping season is upon us. What better way to celebrate the nightmare that has been 2016 than by topping your tree with a miniature MAGA hat?

The Trump campaign released the limited-edition ornament via an email last week and screengrabs of the gilded red hat soon appeared on Twitter.

Trump store is selling a Christmas ornament in the shape of a "Make America Great Again" hat. "Finished with 14k gold." Price: $149.00. pic.twitter.com/gmgFxrp9JD

And now the hat has made its way to online mega-marketplace Amazon. While the hat is only available through third-party sellers, the comments section is the real attraction here.

Amazon users are flocking to the listing and having a field day, answering user-generated questions with an acid wit.

They answer questions about the ornament’s dimensions.

They reflect on whether the ornament will “keep its promises.”

They speculate on its durability.

Though opinions about how long the ornament will last do vary.

One thing users agree on is that the gilded hat is most likely made in China.

They’re also writing reviews that roast the man who will soon become president of the U.S.

Some lament that the ornament is not what they asked for.

And many are happy to point out its troublesome flaws.

There are some deeply troublesome flaws.

The current rating for the hat based on user reviews is 1.5 stars. But that hasn’t stopped retailers from listing it at the yuge starting price of $224.99.

As of the writing of this article, there are nearly 4,000 user reviews.