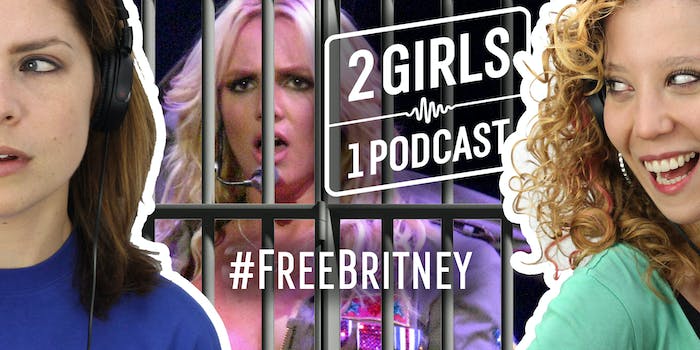 For the activists behind @FreeBritneyLA, the saga continues.

In 2007, Britney Spears was placed under a conservatorship, relinquishing control of her finances to her father. This legal arrangement is typically constructed for elderly people with significant assets and declining faculties. In Spears’ case, the pop star continues to perform and generate income regularly, yet cannot prove to the probate court that she has overcome whatever mental health challenges might have lead to the conservatorship in the first place.

The result has been increased public scrutiny and a large online community of activists, crystalized in the recent New York Times / Hulu documentary Framing Britney Spears. The #FreeBritney movement, once dismissed as a vocal pocket of obsessive fandom, is now fighting to reform the abusive laws that bound Britney, and likely thousands more.

This week on 2 GIRLS 1 PODCAST, Alli and Jen speak with Leanne Simmons and Kevin Wu, two activists who moderate the @FreeBritneyLA communities, and were featured in the New York Times documentary. They discuss the mysteries around the conservatorship, the online fandom that has rallied to Spears’ side, and much-needed judicial reforms.