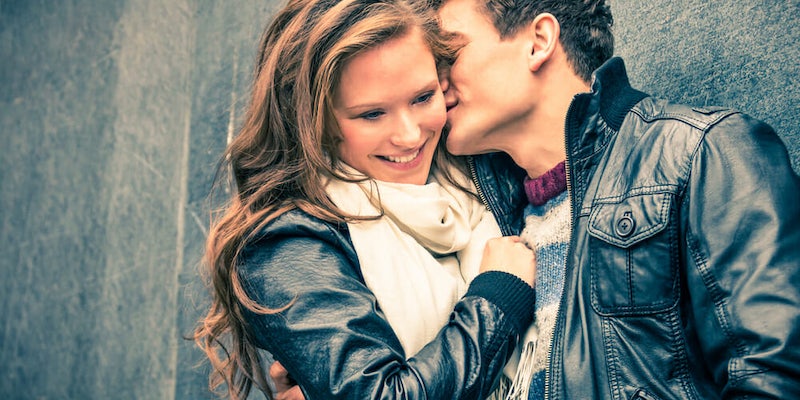 'Bernie would have won.'

One of the most irritating and pervasive things on your Twitter timeline this week is a stock photo of a man pressing his mouth against a woman’s ear. It’s captioned, in the big, outlined Impact font of a decade ago, “Post the four words every girl wants whispered in her ear.” The original caption was likely written as an earnest challenge, but the internet has turned it into a meme.

Most of the responses are jokey and ironic, summoning up old memes or phrases that would be very uncomfortable to hear in a whisper.

keep the crocs on pic.twitter.com/wiiEX6enLK

This tweet, which references last month’s ‘it’s free real estate’ meme, is one of the best responses to the stock photo and caption.

But some of the reactions actually attempt to consider a woman’s genuine desires.  The honest ones by women are the funniest:

Your thesis has passed pic.twitter.com/k682DGCcIf

It’s not clear where the meme started, but some of the most-liked entries have come from Barstool Sports personalities.

Stock photos have long been a valuable source of meme images. Over the past two years, the Distracted Boyfriend and Hide the Pain Harold have gone from stock images to instantly recognizable characters on social media. Accounts like Dark Stock Photos exist purely to call attention to some of the weirder images available on stock sites.

Thanks to the “post the four words” caption, the couple in the ‘whispering’ photo don’t represent diverse concepts in the same way as Distracted Boyfriend and the two women in his life. There’s no object labeling here. They’re just stand-ins for generic ideas of “man” and “woman.”

In 2018, when memes are increasingly weird or dialectic, headed toward becoming art or a mature part of the discourse, “post the four words” feels like a step backward. People are already declaring that they’re sick of seeing it in their timelines:

I think the "POST FOUR WORDS" meme is a MeToo test that pretty much everyone is failing.

The people who are participating in this meme likely know that it’s a bad meme—and that’s why they’re mocking it with sarcastic four-word answers. It’s a rejection of the type of heteronormative relationship presented in the stock photo and caption. Since this meme mostly exists to mock a dumb caption, it won’t have the lifespan of other popular stock photo memes, like Distracted Boyfriend, which is still going strong. Instead, it will probably fade out before the week is over. In four words: this meme won’t last.