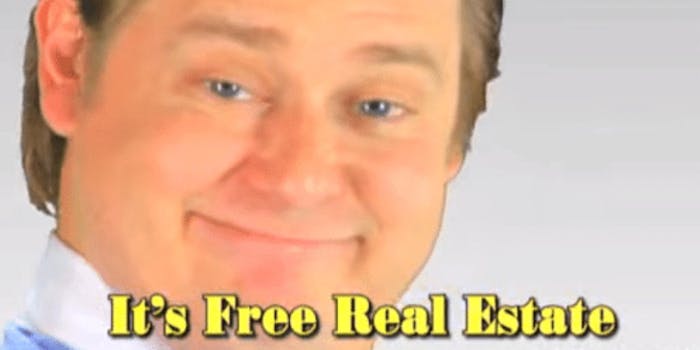 It's one of Tim and Eric's most enduring bits.

Meme culture does a lot of things that TV can’t, but some of the internet’s best, funniest jokes borrow their raw material from TV comedies. Whether it’s SpongeBob Squarepants or American Chopper, there’s a TV show behind tons of memes. This week, it’s Tim and Eric Awesome Show, Great Job!

The “it’s free real estate!” meme riffs on a joke from the Adult Swim series. The original 2009 sketch is a commercial for a free house for one guy, Jim. Tim and Eric try everything to get him to claim it, with Tim finally whispering the money line at the end: “It’s free real estate!”

According to Know Your Meme, the line has long been popular with Tim and Eric fans, but this week it went mainstream on Reddit. It seems to have started with a post on r/historyporn describing the pillaging of America by colonists.

The meme spread out from there, identifying other people and the things they treat as “free real estate.” The format mostly stayed the same, and there are a lot of historical references in the mix.

This meme is mainly taking place on Reddit’s r/dankmemes, one of the internet’s most active meme hubs.

It’s not all about the past, though. It’s also about the future.

Eventually, like many memes that prominently feature captions, the “free real estate” meme became a game of editing the text at the bottom to make new and original jokes. We’ve seen this before with the anime meme “I see you’re a man of culture as well” and the Spider-Man meme “I’m something of a scientist myself.”

If you’re really clever, you can even change up Tim’s face to go with the new captions. Daily Dot art director Jason “Challenger” Reed had some especially good jokes in this vein.

The real estate meme has yet to blow up on Twitter, but it’s still dominant on Reddit after more than a day of jokes. And on YouTube, it’s been a thing for nearly a year now. Here are some of the best video examples, most of which use Tim’s whispering as the punchline.

It’s a testament to the dedication of Tim and Eric fans that one of the duo’s nearly 10-year-old bits is one of the week’s biggest memes. That puts them in a class with The Simpsons and SpongeBob, shows whose particular brand of humor has made the generational leap from TV to meme culture. Awesome. Great job.