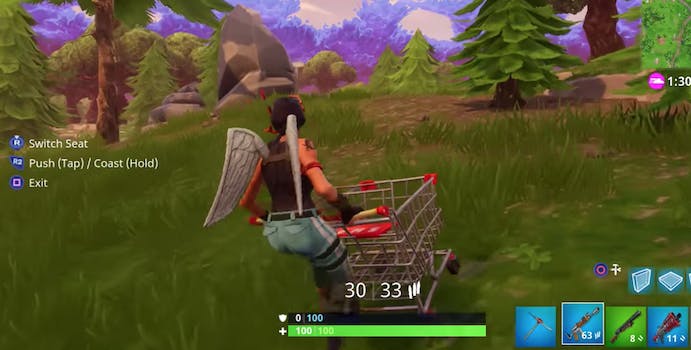 It's the first usable vehicle in the game.

Fortnite Battle Royale is one of the wackiest games out there. It’s also a verifiable meme machine, and its latest craze comes from the addition of what could be considered the first usable vehicle in the game: a shopping cart.

Previously, you could transform into Avengers: Infinity War’s Thanos and troll around daring other players to kill you while dancing your way around the map. Before that, the entire Fortnite community was awash with rumors surrounding a gigantic meteor that was poised to completely decimate an area on the map.

But now shopping carts are taking center stage, and it’s insane. They’re the same harmless trolleys you see at the supermarket, only now they’re in the world’s biggest battle royale title. Developer Epic Games granted players the ability to interact with them in a recent update, and the Fortnite community is freaking out about them.

Just have a look for yourself—they look so silly!

The shopping cart in Fortnite 😂😂 pic.twitter.com/1rhUz6O4VM

However, these shopping carts do come with a twist. You can’t do much with one of them by your lonesome. It takes two players to utilize them to their full potential, which has ended up making it one of the more involved memes to come out of the game.

One doesn’t simply hop into a cart and watch it careen around on its own like some sort of jet-propelled rocket. You don’t just push it around like you’re at the grocery store, either. But you can push it along to let it coast with some momentum. That’s pretty fun.

To get the most out of these bizarre additions to the game, you need to hop in a cart and have a buddy push you to victory.

As ridiculous as that sounds, that’s exactly what people are doing, with gusto. People can’t get enough of these goofy buggies, and they’re taking over the internet in the best way possible. Some fans are even combining the ridiculous nature of two adults pushing each other in a brightly colored cart with other memes online, which we all knew was coming.

It’s hilarious, but the cart can actually be a little difficult to use. If you’re using it with two players, the cart pusher usually remains vulnerable, unable to use their weapons. If you’re the person riding, it can be a lot more difficult to get kills than if you were just on foot. So while you get something to giggle at, it’s not the best method for strategic play.

It sure is funny, though.

I just killed two people with one sniper bullet while in a shopping cart??? wtf is going on yo fortnite stays LIT pic.twitter.com/WX8Y1ufTIU

Maybe it’s a conspiracy. The shopping carts won’t even move in a straight line sometimes, for crying out loud!

Fortnite Battle Royale is the biggest game in the world right now (and if you disagree, feel free to look at Google Trends) and any addition developer Epic Games implements always causes huge waves among millions of gamers. In fact, we’d be hard-pressed to think of a community that could take something as simple as a shopping cart to such tremendous heights. Here’s to you, Fortnite community. You took something as mundane as a shopping cart and made it into a joke that the whole internet’s now in on. Keep on doin’ you.