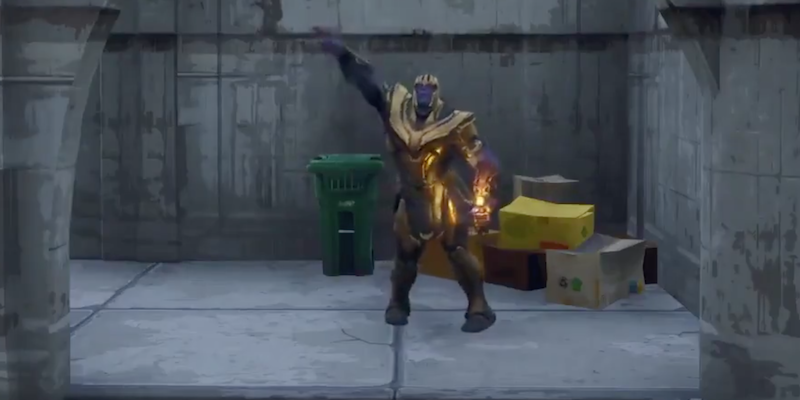 For better or worse, Avengers: Infinity War‘s ultra-powerful villain Thanos left quite the impression on moviegoers. But it wasn’t just the latest Marvel film that welcomed the Mad Titan—he also made an appearance in the massively popular battle royale video game Fortnite.

The iconic supervillain made waves in the gaming community when developer Epic Games announced the “Infinity Gauntlet Limited Time Mashup” event on Twitter, an epic crossover opportunity for two of the biggest brands in the world. But becoming Thanos wasn’t the only thing Fortnite fans ended up loving.

They were thrilled that he could bust a stone cold groove, too.

In a hilarious turn of events, Fortnite and Avengers fans all over the world amused themselves (and everyone else on the internet) by forcing Thanos to dance himself into oblivion in-game, annoying other players and making light of the baddie’s destructive power. He’s way less threatening when he’s doing the Robot, after all.

Thanos’ descent into the massively popular online multiplayer game officially began on May 8, with the infamous Infinity Gauntlet dropping onto the map in the Fortnite Battle Royale game mode. The 100 players entering the map to duke it out for supremacy would all have a chance to step into the shoes of the callous villain, but only for a limited time.

The premise was simple: The first player to find the gauntlet would be able to transform into Thanos. The lucky player would wield the power of a completed Infinity Gauntlet with all six Infinity Stones, making them a force to be reckoned with. Players would have to group up to take anyone with the Infinity Gauntlet on, giving anyone who was able to become Thanos part of a sure win if played correctly.

Not long after Thanos joined the game as a playable character, Fortnite fans discovered one particularly magical tidbit: He could use the same emotes as any other normal character. Emotes are essentially animations that you use in-game to communicate with others, ranging from munching popcorn to the ever-popular slow clap. Thanos was able to use every single one of these emotes, and when people found out, it was on.

With this revelation, the floodgates were officially open. Once folks knew there was a way to make Thanos dance like a puppet on a string, there was no stopping this meme train from pulling into the station. YouTuber Chris Manning, who goes by “LD2k” on Twitter, put together a GIF of one of the most ridiculous things we’ve seen Thanos do so far, which seemed to kickstart the avalanche of edits that resulted from the discovery. Yes, that’s Thanos dabbin’ on the haters.

Video editors had a field day capturing footage of Thanos going down the list of the various dances the hulking brute could perform, right down to the “Floss” dance pioneered by our favorite deadpan dancer, Backpack Kid.

The sheer hilarity of watching one of the most feared villains in the MCU doing the Carlton dance or the ridiculous “Take the L” jig was just too much for players to handle, as new Thanos memes were birthed with each passing moment. Does this look like someone capable of wiping out half of all life in the universe?

Just got the Infinity Gauntlet during my first round and became #Thanos#Fortnite #PS4 #Avengers #PS4share pic.twitter.com/FxfvGsNaCE

It’s a dance battle, Thanos. (x-post from r/FortniteBR) from marvelstudios

It didn’t take long for dancing Thanos footage to reach Josh Brolin himself, the actor who plays the villain in the film. Though Brolin had no idea what Fortnite actually was, when shown footage of Thanos acting a fool in-game by IGN, he seemed simultaneously amused and horrified.

“What’s the deal? He’s, like, dancing. Why is he dancing? I don’t understand,” he muttered while viewing one of the several thousands of memes.

Watching the harbinger of doom for some of our favorite Marvel characters doing the Worm has been some of the funniest content to have come out of Avengers: Infinity War, but the fun has come to an end. Unfortunately, the Infinity Gauntlet Limited Time Mashup event is now over, and Thanos has been removed from Fortnite.

We had to play as Thanos in @FortniteGame just so we could make this. #CONTENT pic.twitter.com/5Qmbkg20Kp

Luckily, we’ll still have all the beautiful memes he left in his wake.