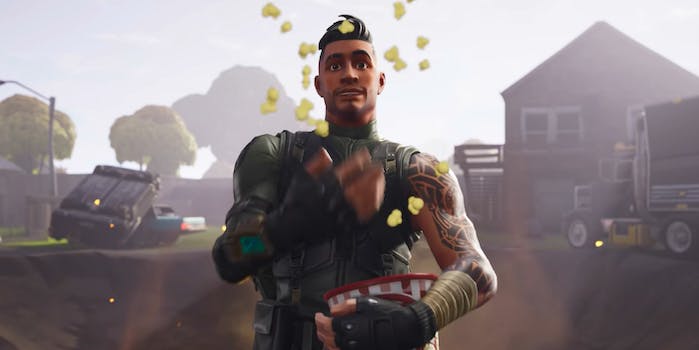 Fortnite’s season four update finally makes good on the game’s month-long campaign of teasing a meteor in the sky, complete with the destruction of Dusty Depot. A few dedicated players have now discovered that there’s even more than what lies above ground in the updated map.

Southeast of Lonely Lodge, if a player breaks through the unnamed house’s floor (by the bottom of the staircase, or just building ramps around the cliff’s edge), you can find a fancy-looking underground base with a bunch of fancy-looking computers and an unknown logo plastered on the center wall, as shown in redditor TopiKoodaa’s video.

Northeast of Snobby Shores, you’ll find a missile sticking out of a silo at the top of the mountain next to the house. Descend into the silo and you’ll be met with similar computers and security cameras, as well as some purple cars and a decidedly more evil-looking logo as shown in Reddit user Philendrium’s video.

It would fit with the Hollywood film set theme of season four, including the newly destroyed house with a giant dinosaur footprint embedded in the ground, as seen in Reddit user Qpaniic’s screenshot. The house is near a camera and dolly, so it’s doubtful we’ll see actual dinosaurs anytime soon in Fortnite, but we can only guess at what the rest of season four and ultimately season five will hold for the ever-evolving island. For now, it looks like players will be looking back down towards the Earth rather than the sky.

If you’re curious why a falling meteor and cartoony combat simulators have gotten so popular, make sure to check out our rundown of why battle royale games have become so popular.

You can also check out our how-to guide for Fortnite mobile.