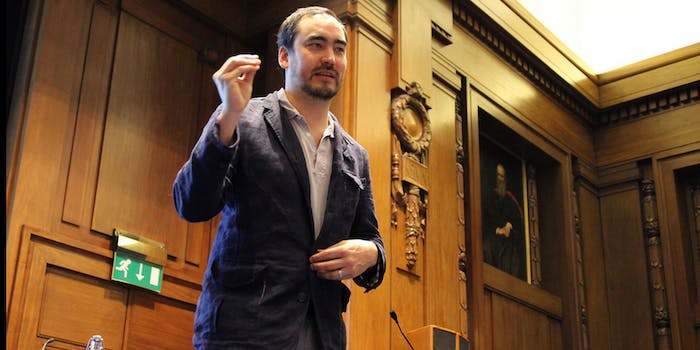 The Columbia Law professor hopes he can derail Comcast plans to buy Time Warner by blocking the deal in New York.

The so-called father of net neutrality wants to put a stop to the Comcast-Time Warner merger, and he’s willing to get into the fight any way he can.

Tim Wu, the Columbia Law School professor who coined the term “network neutrality,” has decided to run for lieutenant governor of New York. If he wins, he hopes to use the power of his elected office to thwart the telecom merger – at least in his home state.

“The main issue [related to technology] I’m focusing on right now is Comcast and the really big mergers,” Wu told ArsTechnica. “I see the lieutenant governor position as one that puts pressure on other agencies and advocates for the public’s interest. I would push the agencies to block the Comcast merger.”

Though the lieutenant governor has no formal authority to veto a merger in New York, Wu is running alongside Fordham law professor Zephyr Teachout, who is seeking the governor’s office and share’s Wu’s opposition to the Comcast-Time Warner deal. Both are currently seeking Democratic party nominations.

Wu told the Washington Post that he and his running mate want to use state level power to disrupt the nationwide merger. He said that New York obviously can’t block a merger in another state. But because Time Warner Cable has such “substantial business operations in New York,” he hopes that by blocking the deal in his own state it can be halted altogether.

Presently, Comcast’s offer to buy Time Warner Cable is being reviewed by federal regulators as well as by the New York Public Service Commission.

The proposed deal has a number of vocal critics in Congress, including Sen. Al Franken (D-Minn.). It’s also proven unpopular with most Americans. A Reuters/Ipsos online poll back in March found that “52 percent of those surveyed believed that mergers such as the Comcast-Time Warner Cable deal result in less competition and are bad for consumers.” In the same poll, just 22 percent believed the merger would make Internet providers more efficient and better serve customers.

Most opponents fear a merger of the nation’s two largest cable companies will create a monopoly, increasing prices while decreasing service due to lack of competition. Comcast executives have defended against these charges by noting that their company and Time Warner currently do not directly compete in any of the same markets.

But Wu argues that rate increases are inevitable if the deal is allowed to proceed.

Wu said he is also concerned about proposed mergers between AT&T and Direct TV, and Sprint and T-Mobile, but is still deciding whether or not he opposes them. Overall, Wu described his political platform as being akin to the trust-busting progressives of the early 20th century. Wu’s past work in the political realm included serving as a technology advisor to Barack Obama’s presidential campaign back in 2008.

The Columbia professor is perhaps best known as being the author of The Master Switch: The Rise and Fall of Information Empires and for writing a 2003 paper in which he was the first to use the term “network neutrality” to describe the functioning of the Internet. Net neutrality describes a basic tenet of the Internet (currently under threat from revised FCC rules) that says all content should be treated equally on the Web and be shared at the same rate.