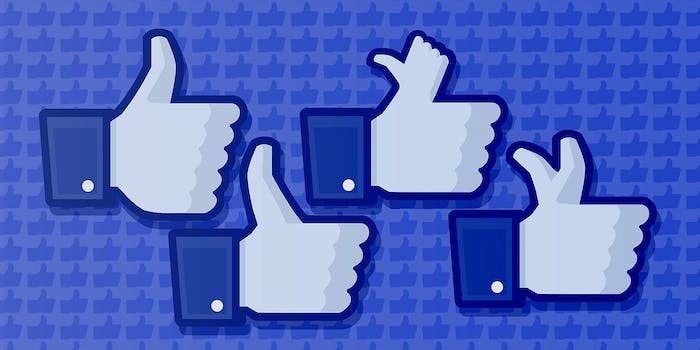 It’s a rabbit hole you might never get out of.

Wait, let me back up a minute, if you have no idea what I’m talking about. You know when something like this pops up in your Facebook feed? 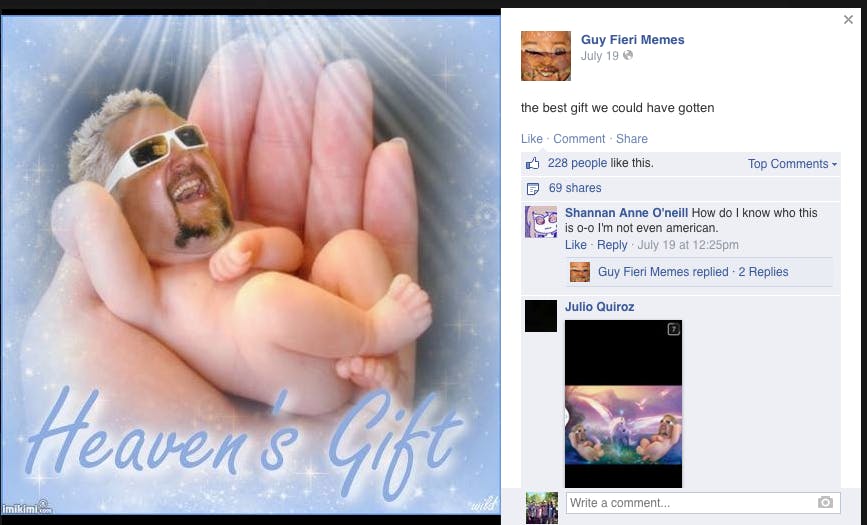 That’s what we’d call Weird Facebook: a loose conglomeration of pages that post bizarre image macros. Fodder for the guy you bought weed from in high school.

The groups vary widely in the number of followers they attract. The biggest group I could find was Freddy Yolo, which has around 55,000 followers. Shit Memes has about 30,000, and Creme de la meme clocks in at 22,000. Below that tier, there are a handful of pages with 10,000 to 15,000 followers, and further down still, a vast array of groups with several thousand followers. Not a throng, but nothing to shake a stick at.

Those numbers are all the more impressive considering that Facebook doesn’t do anything to encourage the existence of these groups.

I’ll give you an example: Say someone recommends that you check out @fart on Twitter. Within 10 minutes, the similar accounts feature will take you to the top 20 or 30 pages that constitute Weird Twitter.

But if you decide to follow, say, Spooki Scary Skeleton, Facebook doesn’t suggest that you follow any other pages. It merely offers a list of pages liked by that page. This makes it very hard to figure out what the biggest pages are.

And the personalities behind Weird Facebook aren’t exactly transparent: when I reached out to the admins of some of the bigger Weird Facebook pages, the response was decidedly mixed. “Haha what,” responded the admin of Creme de la meme. Spooki Scary Skeleton said, “Lol check out the community m8,” and, “these things are good for making money quickly lol.” And after telling me that “there is mini communities [sic] but they’re not worth making an article about,” the admin of Stick memes said, “daily dot more like daily dot on an indian woman’s head.” Then he posted our exchange on his page. 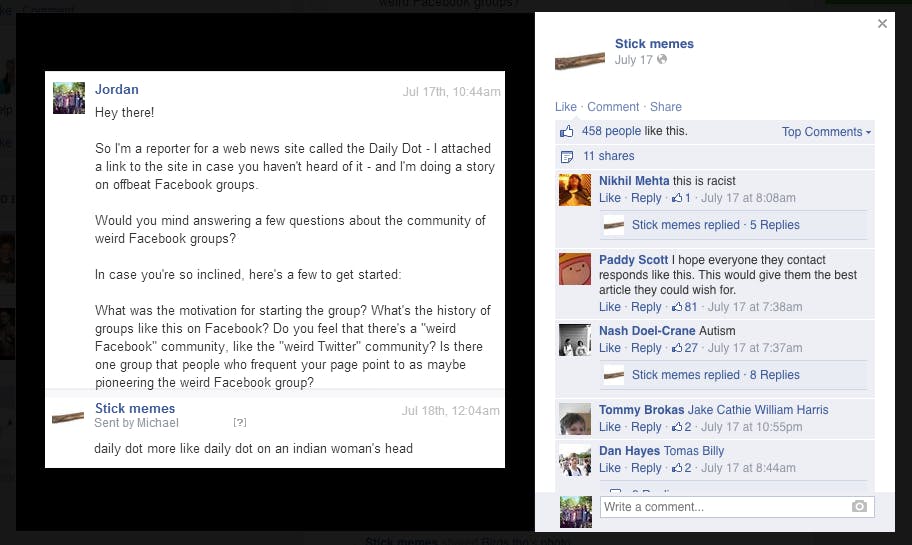 The admin of Shit Memes was more obliging. He described the average WF admin as “a neurotic, borderline depressed individual.”

They post content and begin to gain a substantial following. Then delete the page once it gets to [sic] many likes and the page is ‘ruined’ by the types of people who find out about it.

Shit Memes is based in Australia, and the admin guessed that about 70 percent of their fans were as well. “I’d assume most of the people that follow the page” are either high schoolers or college kids, he told me.

Then of course, there’s the milieu of Weird Facebook, if you can call it that: bizarre, distorted images with nonsensical captions, all set within a world obsessed with obscure video games, crappy computer graphics, outdated operating systems, and Danny DeVito. Pages are built around vague themes—skeletons, birds, sticks—but there’s little incentive to stick to the script. Admins basically post whatever makes them laugh.

Some of it is funny. Most of it is off-putting. If David Lynch and Yung Lean could project their consciousnesses into social media, it’d be Weird Facebook. Not the stuff of mainstream success.

In other words, there’s a kind of centrifugal force tugging Weird Facebook away from existence: Facebook doesn’t doesn’t want it, the admins shun the spotlight, and the subject matter is flat-out strange. Like the admin of Shit Memes told me, “Facebook is not the forum for this kind of shit at all.”

So in tribute to the indomitable spirit of weirdness, I present to you an introduction to the inscrutable world of Weird Facebook.

From the About section: WELCOME 2 MY UNIVERSE PLZ ENJOY UR STAY 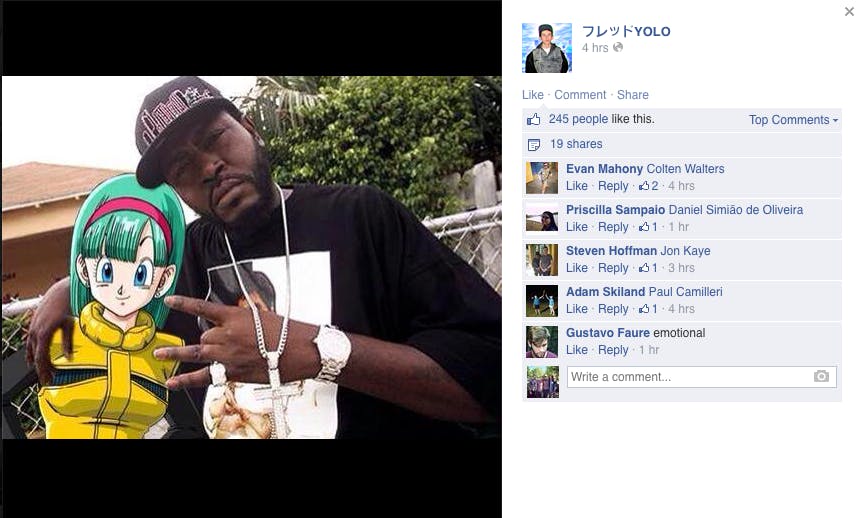 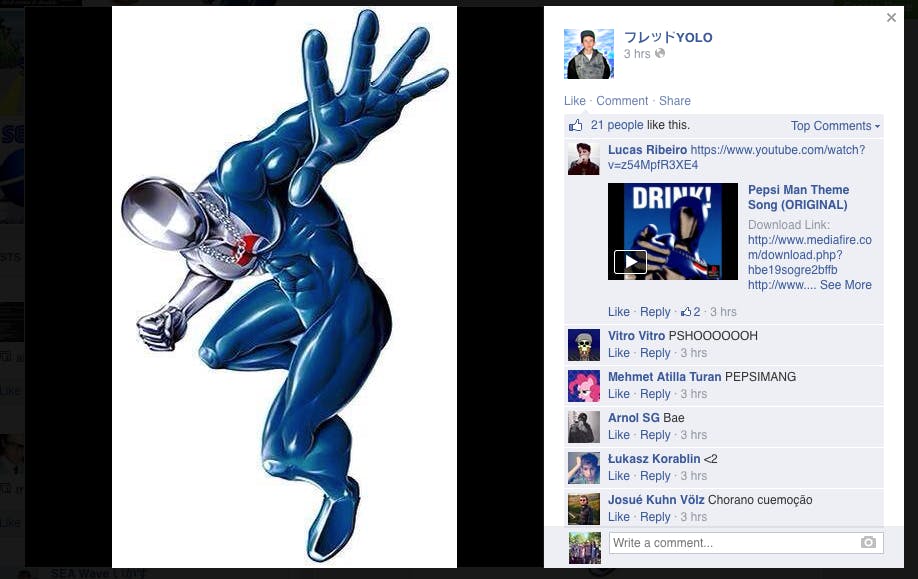 From the About section: “It’s pretty much all unique content. One of the weirdest pages on facebook, you will love it.” 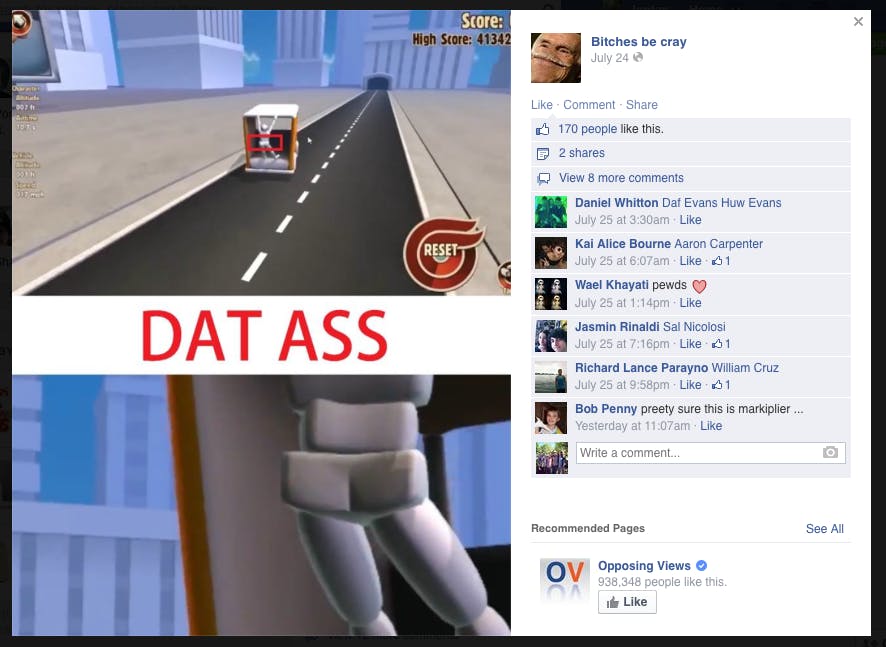 From the About section: “We hate memes and we hate ourselves.” 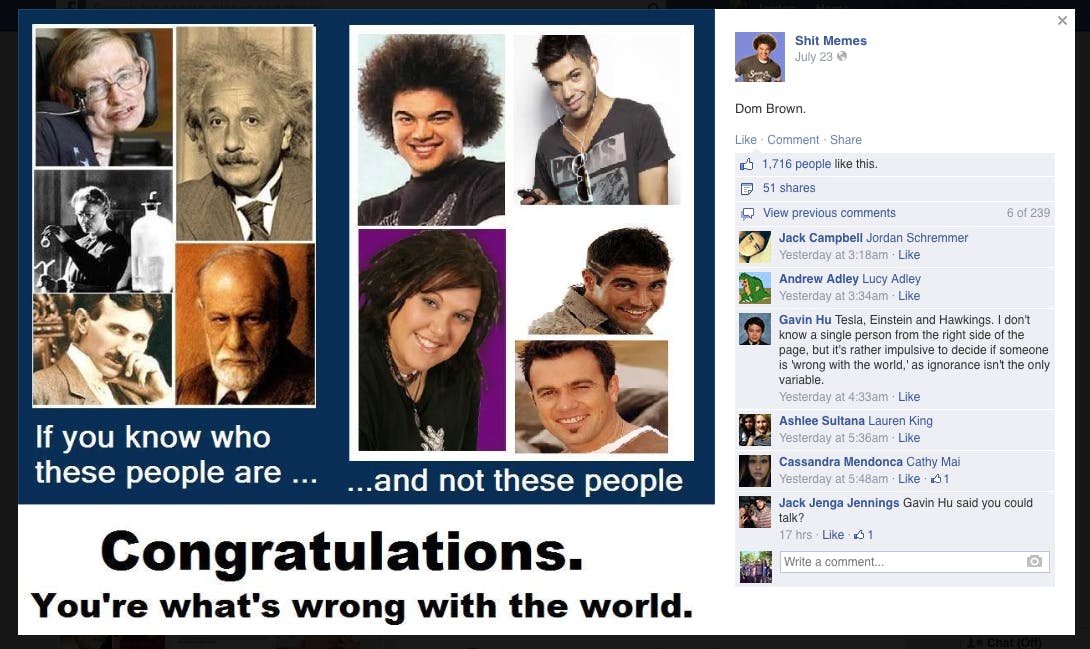 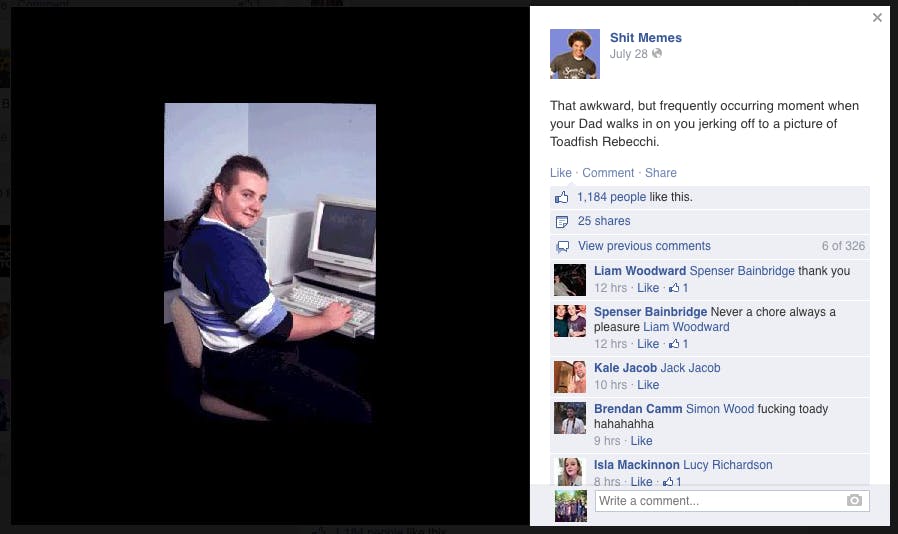 From the About section: “Dank skeletman memes, philosophical debates and minecraft webms” 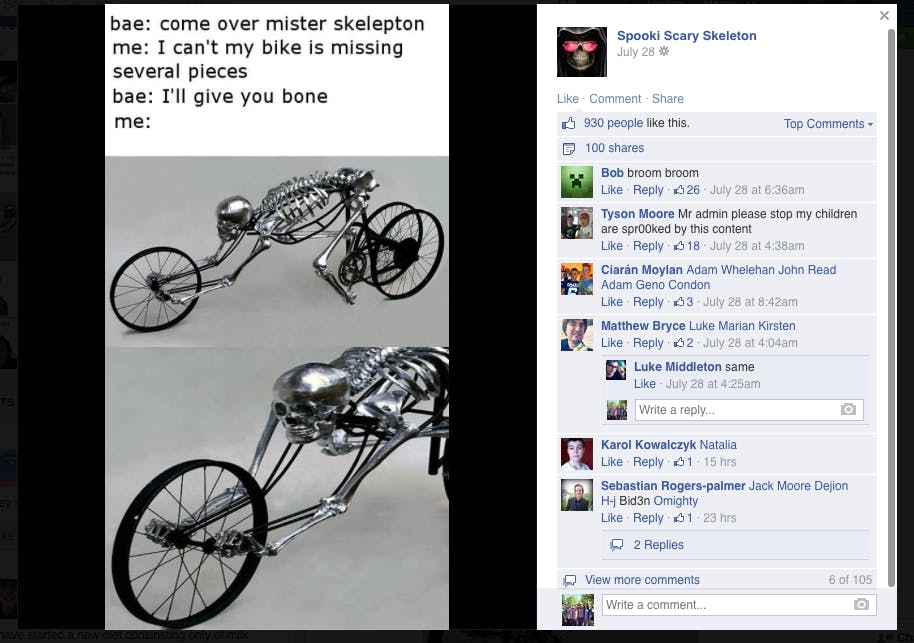 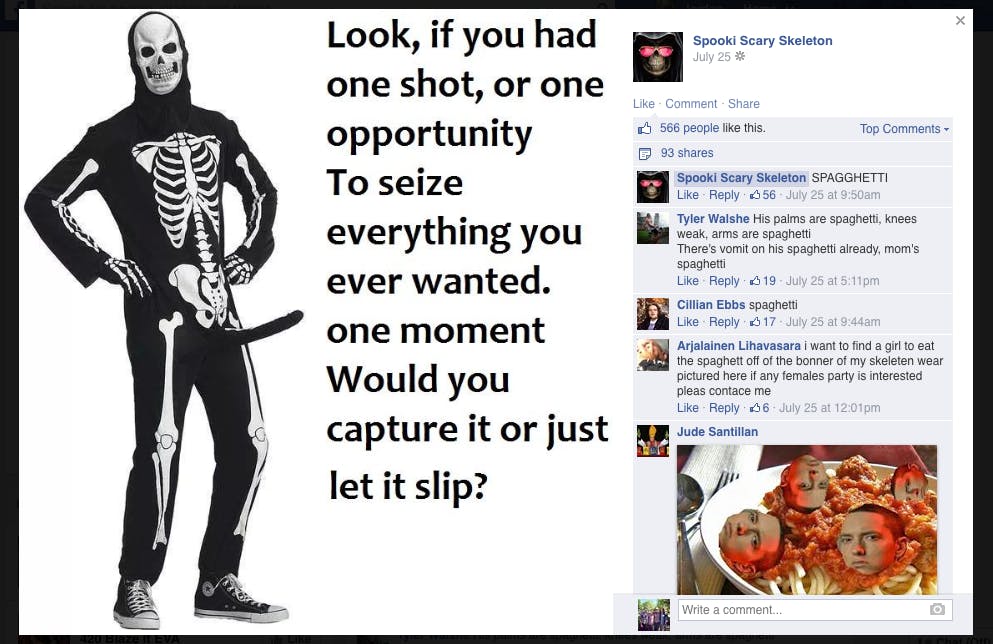 From the About section: “We here at (Birds tho Co.) strive to bring you the best in cute birdes, birde related links, videos, and other cute etc. 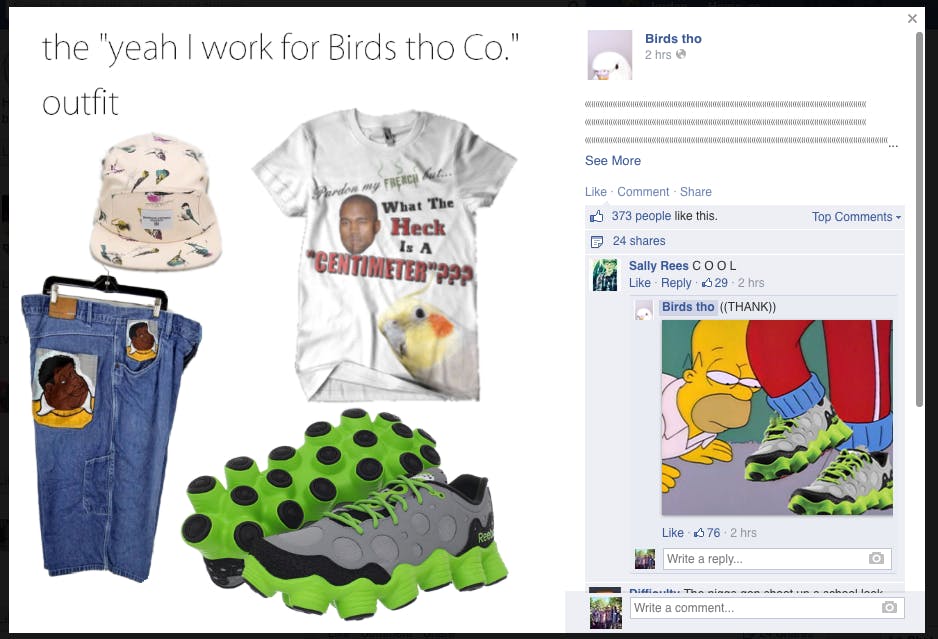 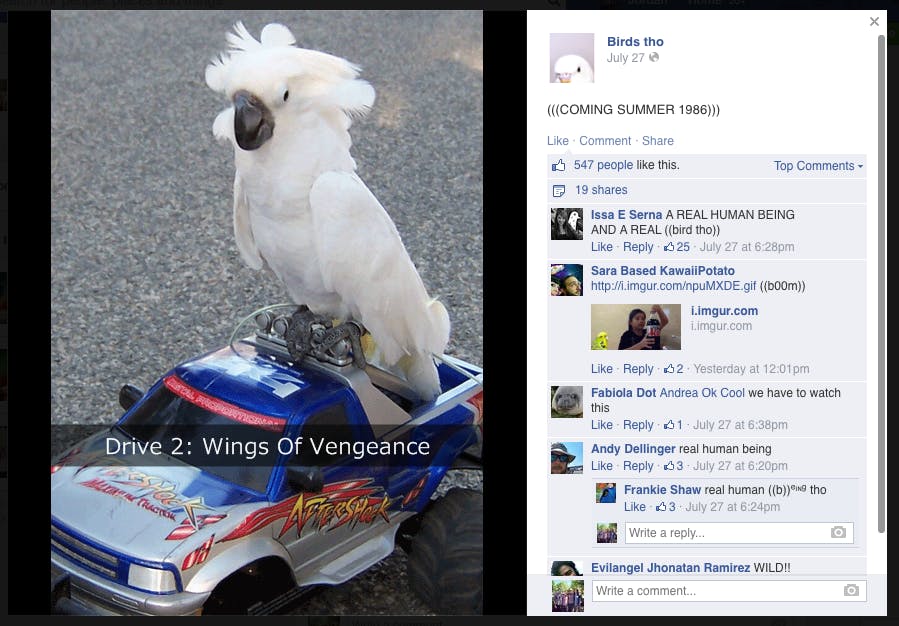 From the About section: “The unoriginal overdone FB page coming from the year 2099 to provide only the greatest memes the future has to offer” 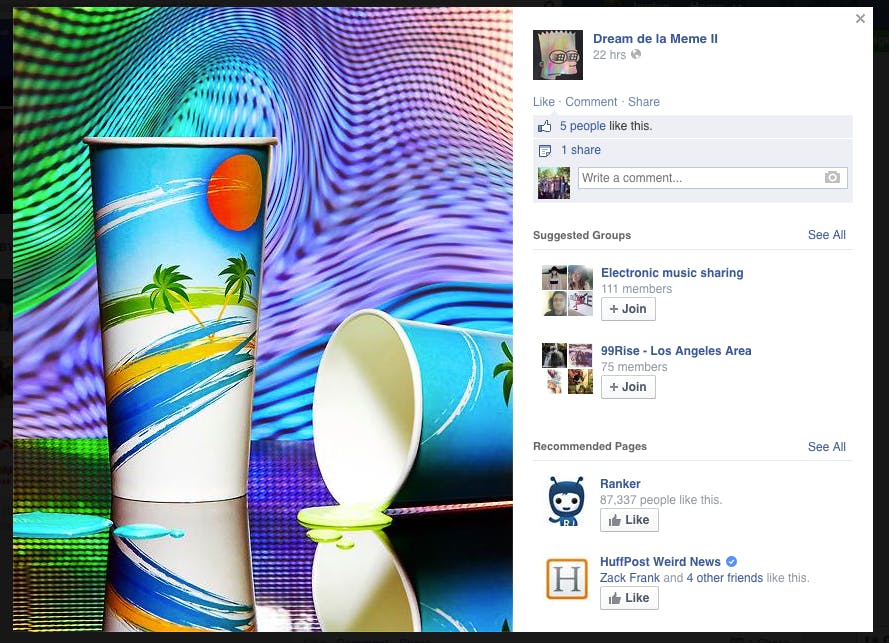 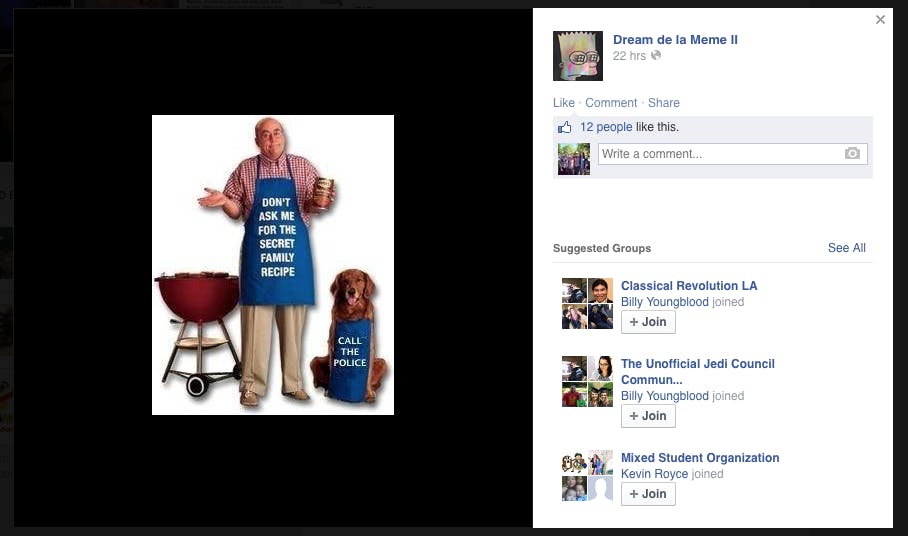 From the About section: “Here at pbc we put an emphasis on proper teamwork and meme management. Each meme is inspected by both admins and put through an extra quality test and if needed it is retouched in the MEM3D program. Our meme experts have brought you great classics, such as kitchensnaeke.jpg and even new, soon-to-be classics, such as Pizza Doge. Stay tuned, and relax. The memes are in good hands.” 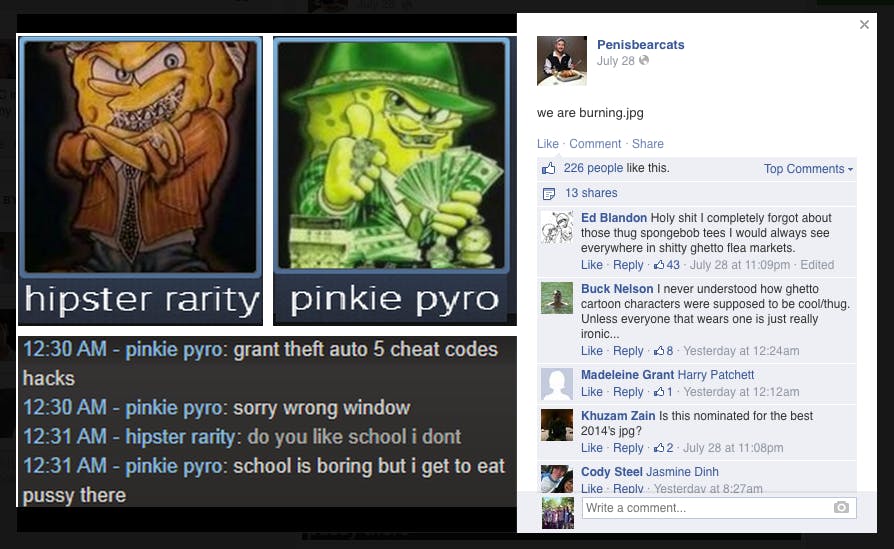 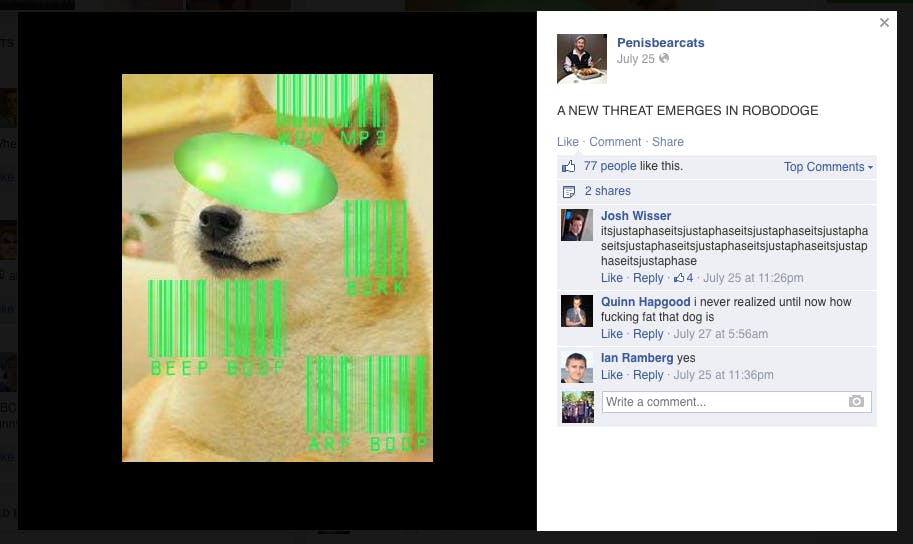 From the About section: “how brown do you have to be to get down? very” 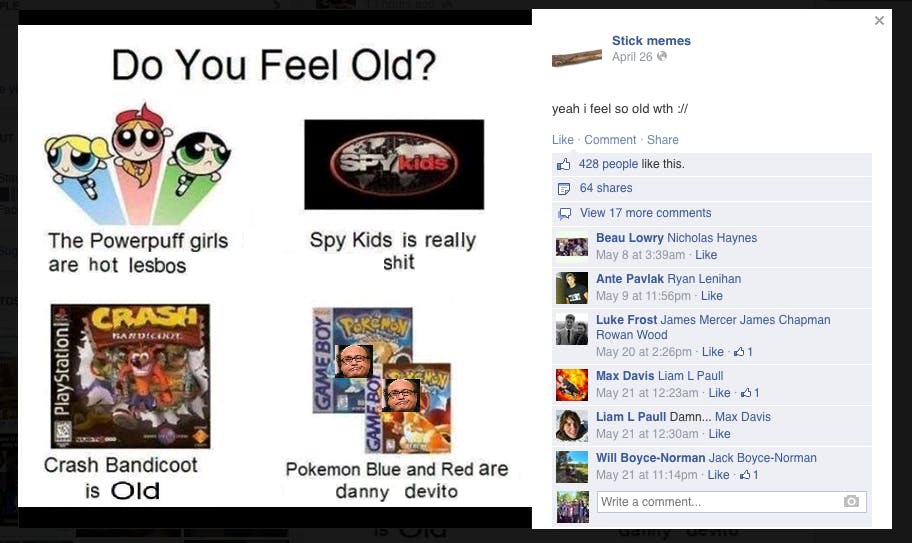 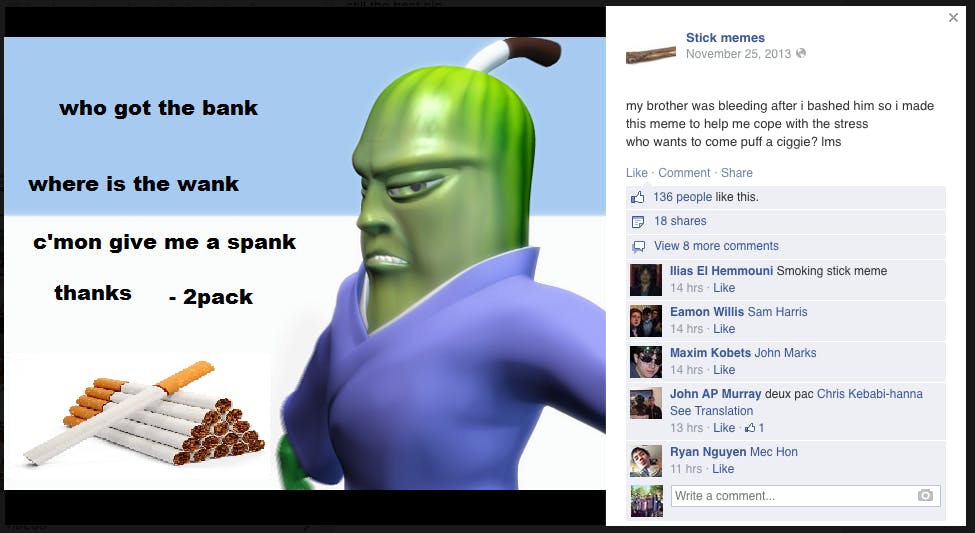 From the About section: “we are a love page. we love everyone!” 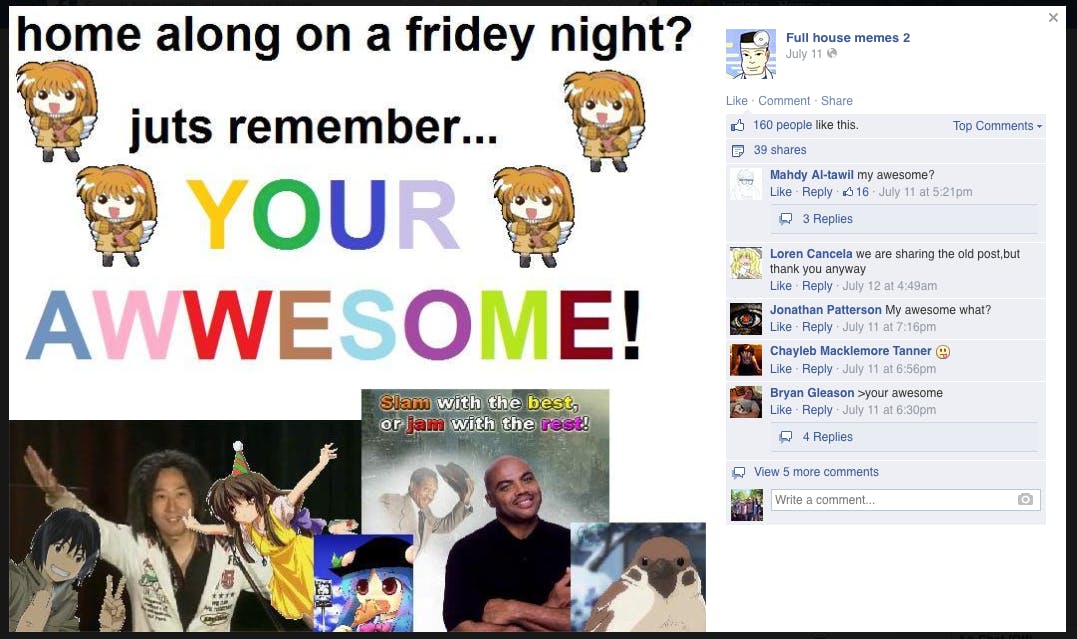 From the About section: “fresh OC steamy maymays every day for you” 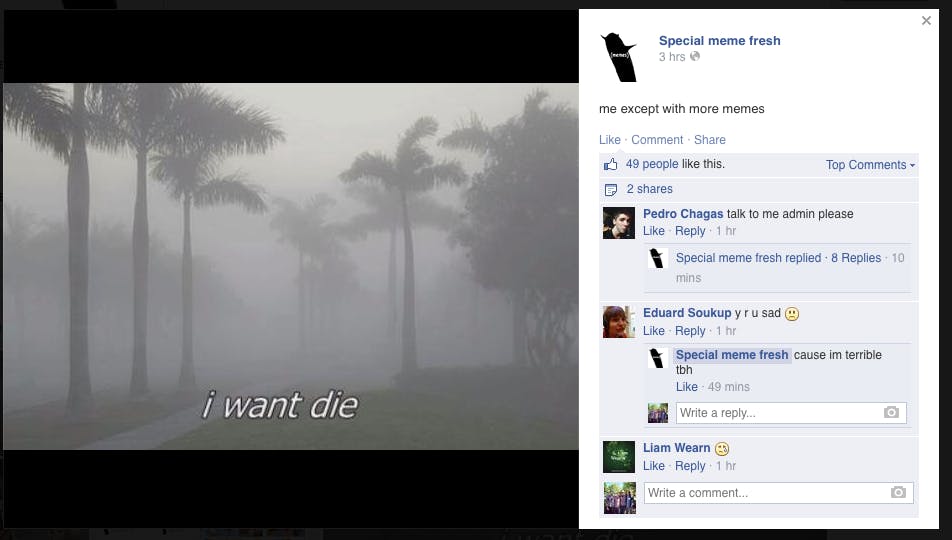 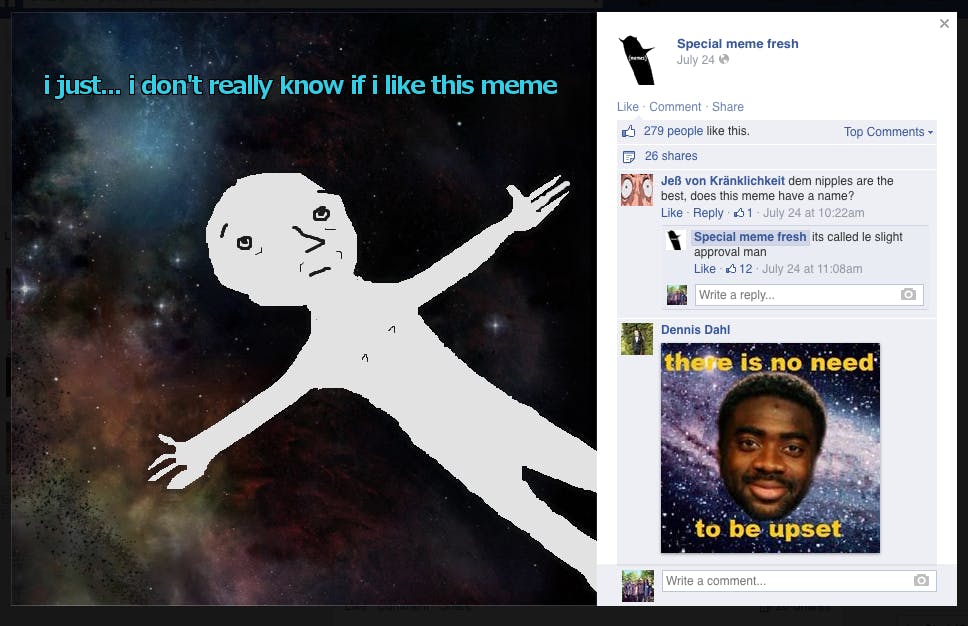 With all the forces of normalcy arrayed against it, Weird Facebook’s continued existence emerges as a kind of victory. These guys don’t need the approval of Facebook to validate their existence. As the admin of Shit Memes put it, “that’s what adds to the obscurity of it all.”

The lack of institutional support creates a sort of ideal middle ground for the arbiters of Weird Facebook: enough infrastructure that they can reach a large audience, but not so much attention that it ruins the fun. In other words, exactly enough approval to inspire the guys behind these groups to keep creating.

Thanks to the admin of Shit Memes for answering my questions thoughtfully, helping point me towards some of the more influential pages, and generally being a super swell guy. Additional background info from the admin of Lizard People of New York and Domenic Casenelli.