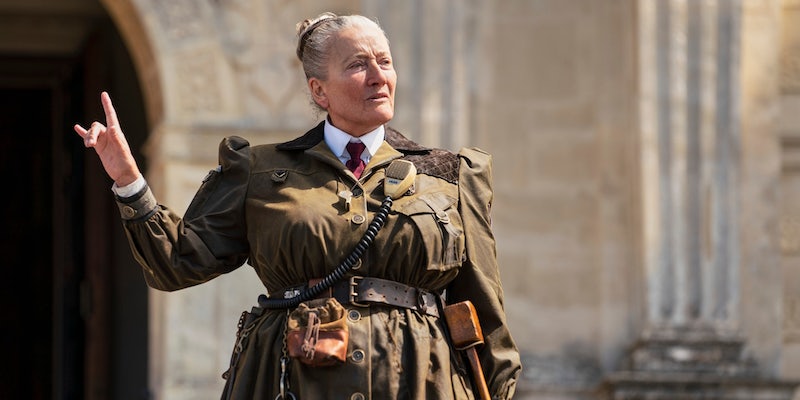 Netflix‘s Matilda is sure to be popular, adapting the acclaimed musical based on Roald Dahl’s beloved novel. However, there’s already one area where it’s facing pushback: Emma Thompson’s fat suit for the role of Miss Trunchbull.

Like many Roald Dahl villains, the sadistic schoolteacher Miss Trunchbull has a pretty exaggerated appearance. She’s meant to be big, intimidating, and implicitly masculine —in fact, Miss Trunchbull is played by a man in the Matilda stage musical, reflecting the British tradition of pantomime dames. Emma Thompson wears facial prosthetics and padding in the upcoming movie, sparking criticism about the practice of hiring slim, conventionally attractive actors for this type of role.

Fat suits are controversial for a number of reasons, ranging from workplace discrimination (because fat actors are losing out on roles) to the often fatphobic way that prosthetics are used on-screen. Miss Trunchbull is a textbook example because her appearance is directly aligned with her villainhood, contrasting with the film’s slim, feminine mentor character Miss Honey.

Netflix’s first images of Thompson as Miss Trunchbull were met by a wave of disappointment on Twitter, inspiring comments like, “We literally never need a skinny actor in a fat suit” and “fat suits are never okay and the film industry should know that by now!” In recent years we’ve seen similar backlash against projects like American Crime Story: Impeachment, where Sarah Paulson was called out for donning a fat suit to play civil servant Linda Tripp.

In the U.K.’s Metro newspaper, journalist Emmie Harrison-West wrote, “As a bigger woman, I find this caricaturisation of my body type utterly dehumanising, and degrading.” Meanwhile, fat acceptance activist Aubrey Gordon shared similar sentiments on Twitter: “I’d just like to be able to sit down and watch a movie and know that my body won’t be a prop, a punchline, a cautionary tale, or completely erased.”

This controversy arrives at an awkward time for Thompson, who is currently promoting the movie Good Luck to You, Leo Grande, in which she plays a retired widow who hires a sex worker to help explore her sexuality. Her performance has been widely praised, and there’s been a lot of discussion about the unusual experience of seeing an older woman’s body and sex life depicted frankly on-screen.

Recent interviews make it clear that Thompson has thought deeply about the pressure women face to appear perpetually young and slim, and the way movies can impact people’s view of their own bodies. She’s spoken about feeling insecure about her appearance from a young age, witnessing the way actresses are encouraged to starve themselves to get good roles. So there’s a noticeable disconnect between the intelligent, sensitive conversation around Good Luck to You, Leo Grande, and the way fat suit roles like Miss Trunchbull demonize or demean people who don’t conform to Hollywood’s skinny ideal.