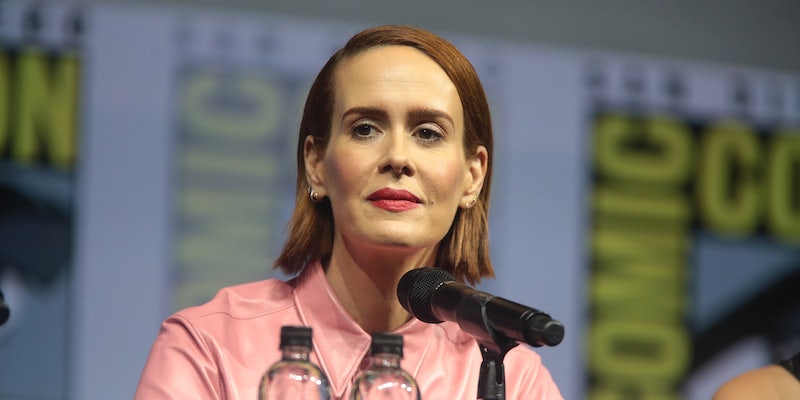 TV mogul Ryan Murphy loves to work with the same actors again and again, so it was no surprise for Sarah Paulson to land a role in American Crime Story: Impeachment. Exploring the Bill Clinton/Monica Lewinsky scandal, co-starring Paulson as Linda Tripp, a civil servant with a key role in the story. Photos from the film set show Paulson wearing a fatsuit, a choice that’s already earning criticism on social media.

Paulson is, like most famous actresses, pretty slim. She dons a variety of wigs and makeup for her work across Ryan Murphy’s American Crime Story and American Horror Story franchises, but a fatsuit is a rather different situation. There are precious few roles available for fat actresses in Hollywood, and this casting choice removes that opportunity and gives it to a thin actress instead.

Back in 2012, a Vulture article chronicled the history of Hollywood fatsuits, suggesting that fatsuits had now “transitioned fully” from serious dramas to schlocky comedies like the Madea franchise. But Gary Oldman won an Oscar for a fatsuit role in 2018 (Winston Churchill), and two of this year’s acting nominees wore fatsuits too: Viola Davis in Ma Rainey’s Black Bottom, and Glenn Close in Hillbilly Elegy.

Fatsuits are still seen as an acceptable choice for a prestige role. But considering the level of fatphobia in mainstream pop culture, they’re not a neutral choice. In an interview with Vice, fat activist Virgie Tovar explained the situation in these terms: “Viewers know that beneath the fat suit there’s a thin person we can root for, without violating cultural rules of fat hatred.” Hence why thin actors are often praised for gaining weight or wearing extreme prosthetics, while fat actors (especially women) struggle to land A-list roles.

It’s not exactly breaking news to say that Hollywood prefers actors to be thin and conventionally attractive, and discriminates accordingly. But in an era where more actors and filmmakers are discussing the importance of inclusive casting, it feels tone-deaf to overlook the troublesome connotations of fatsuits. Sure, there’s a difference between playing Winston Churchill and making a cruel joke like “Fat Monica” in Friends. But in the end, you’re still excluding fat actors while giving roles to thin people who can easily find work elsewhere.