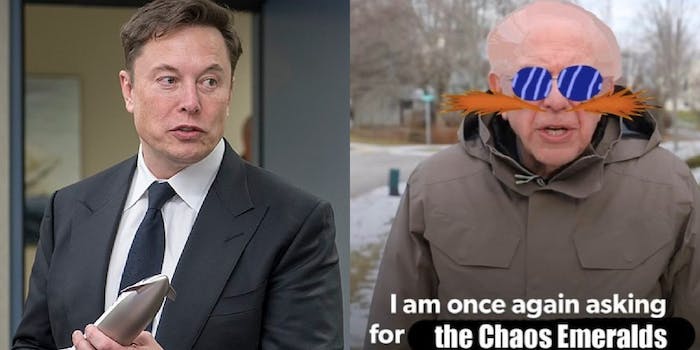 The Tesla founder has made riffing on the Democratic candidate a recurring pastime.

Tesla founder and billionaire Elon Musk has shared at least three Bernie Sanders memes leading up to the 2020 election.

Business Insider reports that Musk originally endorsed Democratic candidate for president Andrew Yang, who dropped out in February. While it’s unclear whether Musk now supports Sanders for president, it is clear that he loves the memes about the candidate.

The first Sanders meme that the tech mogul posted was on Feb. 11, according to Business Insider, and frames the Vermont senator as the villain from Sonic the Hedgehog, Doctor Ivo “Eggman” Robotnik.

Musk’s meme plays off the most used meme template of Sanders’ 2020 election, the line “I’m once again asking for your financial support.” This meme comes from a campaign video.

People have made the cut of him asking for support into endless memes by removing the words “your financial supports” and replacing them with jokes.

In Musk’s meme, Sanders is asking for “chaos emeralds,” a reference to the gems in Sonic.

The billionaire also posted a meme about Sanders explaining the ending to Neon Genesis Evangelion, a popular anime series from the ’90s. The show has an infamously difficult and confusing ending, and there have been several memes riffing off of this.

In this meme, Sanders is seen explaining and pointing an image from the series that’s plastered on a chalkboard. Musk captioned the meme, “be still my beating heart.”

Just a couple of days ago, Musk shared another Sanders gag. He made a sex joke about the number 69.

Despite all of the meme love that Musk is showering on Sanders, his support is unclear. Framing Sanders as a villain doesn’t indicate apparent support, but then again many of Musk’s memes are apolitical.

We’ve reached out to Musk for clarity on the matter.