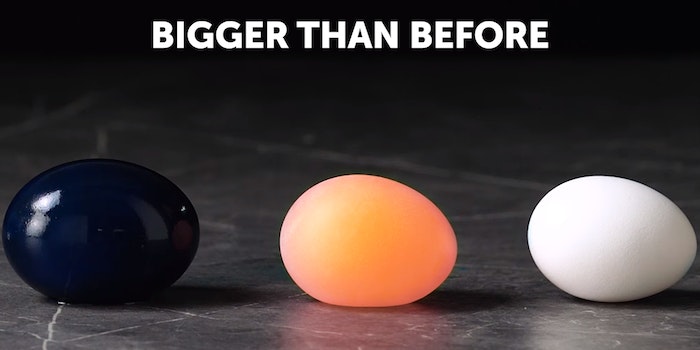 All you need is vinegar, maple syrup, and 3 days.

Eggs have emerged as one of the top-memed objects in 2019. The year began with a photo of an egg garnering more likes than a photo of Kylie Jenner’s daughter. Then a video of an egg getting a makeover went viral. And a teenager who egged Australian Sen. Fraser Anning became known as “egg boy.” Now we have the “egg bigger than before” video.

Confused? We all are.

On Thursday, Twitter user @chipspopandabar shared a video and wrote, “please watch this extremely bizarre facebook craft video.” The video is indeed bizarre—it’s a tutorial on how to make a blue-dyed, bouncy egg. The video ends with the caption “bigger than before.” That’s it. That’s the whole purpose of this craft video: to soak an egg in vinegar, maple syrup, water, and dye for no apparent purpose other than to make an egg that is “bigger than before.”

Twitter users loved the deranged video, and the phrase “bigger than before” quickly became a meme.

When the egg is bigger than before pic.twitter.com/YYnZOQFKbm

This is my favorite David Lynch movie https://t.co/ThGhpXWtSN

This broke me and my sister asked why I'm laughing so hard all I could say was "egg that's bigger than before" https://t.co/9N5CPETE4R

I'm into basket weaving, pottery, needlepoint, and making eggs bigger than before.

It’s not a surprise that the “bigger than before” egg video was instant meme fodder. Last year, a Cheddar video with the caption “they did surgery on a grape” turned into one of 2018’s top memes. There’s a simple formula here: Publish a video with something strange or unusual happening in it involving a piece of food, add a direct-yet-cryptic caption, and people will eat it up.

The best part about the egg “craft,” which was posted to the 5-Minute Crafts Facebook page, is that it apparently takes three days. Yes, three days to make a bouncy, blue egg. Seems like a waste of an egg (and maple syrup), but the tutorial is there if you want to try it yourself. Please report back to us if you do. We want to see if the egg is bigger than before.