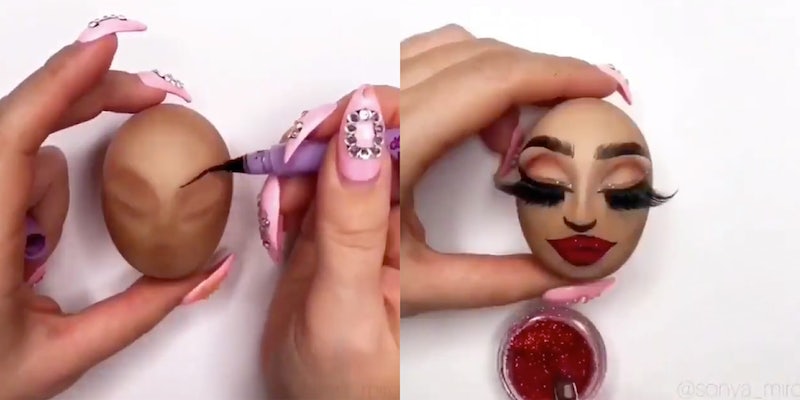 Viral video shows an egg getting a hot makeover

This egg's makeup is crackin'.

Twitter user @maripela_ posted a mesmerizing video of what appears to be herself decorating an egg, but it’s nothing like the egg dyeing you might think of.

She painted a full, beautiful face of makeup on this egg, taking it from nutritious to positively sickening in 52 seconds. We’re talking foundation, blending, contouring, powder on a hand-drawn face on with precise eyebrows, nose, and mouth. The egg’s final look is as natural as if it came out of the hen that way. And @maripela_ this did all with long, gorgeous nails.

Twitter is losing their minds over the gall of this egg to look so amazing with makeup. How dare it look so ravishing and fierce when the rest of us can barely get winged eyeliner right?

broke: they done surgery on a grape

woke: they done makeup on an egg https://t.co/M8hlooPndr

this bitch really just put a full face of makeup on an egg… i’ve seen it all https://t.co/lEjeJDSZGz

When you realize an egg in makeup fake lashes is prettier than you are…@weareoneEXO #EXO pic.twitter.com/rLmXxDJ6mU

So the egg not only beat Kylie in likes, but now she’s coming for her makeup line too? 2019 is playing no games. https://t.co/ZxHdLhWQ64

am I the only one who thinks putting makeup on that egg is weird? like..there is a whole embryo in there.. https://t.co/3eFfWeoWs9

I just saw someone put makeup on an EGG… this has gone too far I’m DONE pic.twitter.com/6rXHLgTepb

I can’t even do makeup on my FACE LET ALONE ON A EGG https://t.co/i0DPHeORyv

Other folks, like beauty YouTuber Thomas Halbert, are putting their own spin on beautifying eggs.

okay i attempted at doing makeup on an egg pic.twitter.com/eqdTOKkxsH

Some are upset that someone would waste makeup (and those amazing falsies) on an egg.

really out here wasting makeup on an egg https://t.co/MSvpvKbstI

I bet not see you put on no damn makeup on a fucking egg if I payed for it https://t.co/K6eWIa2aga

Of course, @maripela_ wasn’t the first to give the infamous Instagram egg a “makeover.” YouTuber Smokey Glow did two egg makeovers in a video posted last week.

So what’s next? Do we scramble or poach the egg and try to make a ~*lewk*~ out of that? How about painting an egg on a face? The possibilities are endless. We can’t wait to see more egg beauty.