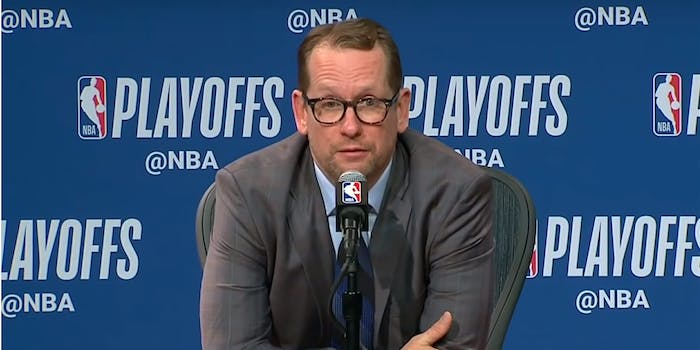 It doesn’t take much to become a meme these days, but Toronto Raptors coach Nick Nurse gave the internet a real gift during the NBA playoffs. A truly universal reaction.

During Game 4 against the Orlando Magic on Easter Sunday, a three-second violation call on Raptors point guard Fred VanVleet caused Nurse to appear frozen in shock, his mouth agape.

Nick Nurse is a legend. He really held this face for 11 seconds. pic.twitter.com/3U5aGybxnV

The Raptors ended up winning, but the memes had already hit by halftime.

*foul on the raptors*

The Game of Thrones crossover energy was there, too.

Arya: “take your own bloody pants off”

Nick Nurse was clearly reacting to Arya and Gendry's scene last night and not anything basketball related #GameofThrones pic.twitter.com/NMZR678M4k