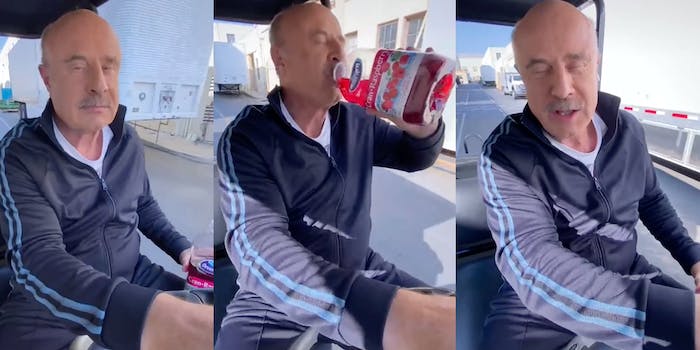 'This is such a vibe daddy Phil.'

He understands the kids in a way few septuagenarians do. His connection with the youth relies largely on his solid understanding of TikTok, where he posts psychology advice and cashes in on trends.

The latest trend to receive the Dr. Phil treatment originated with TikToker Nathan Apodaca (@Doggface208), who filmed himself enjoying a morning skateboarding sesh and gulping down Ocean Spray cran-raspberry juice from a half-gallon jug while mouthing along to Fleetwood Mac’s “Dreams.” It was the serotonin boost we all needed during this chaotic year, spawning a number of copycat videos and prompting Ocean Spray to gift Apodaca a truck loaded with cran-raspberry juice.

Soon, dozens of TikTokers hopped on the #cranberrydreams trend, from the man with a pumpkin on his head to Fleetwood Mac co-founder Mick Fleetwood. Dr. Phil’s recent addition comes a bit late, but it carries that special Dr. Phil energy that TikTok can’t help but love.

Rather than attempting to skateboard, the television doctor films himself driving a golf cart. He gives a zen nod to the camera as the video begins. His half-gallon jug of cran-raspberry juice is more than half full, but he doesn’t spill a drop as he takes a long swig. Eyes nearly closed, he mouths along to the soothing track. His navy tracksuit completes the look.

“This is such a vibe daddy phil,” one person wrote.

“My boy even got faded for the vid,” one commenter quipped.

“Why is no one talking about how he’s absolutely zooted,” another asked.

It’s hard to identify the ingredient behind Dr. Phil’s enviably tranquil vibe, but whatever it is, can we get some? Sharing is caring.