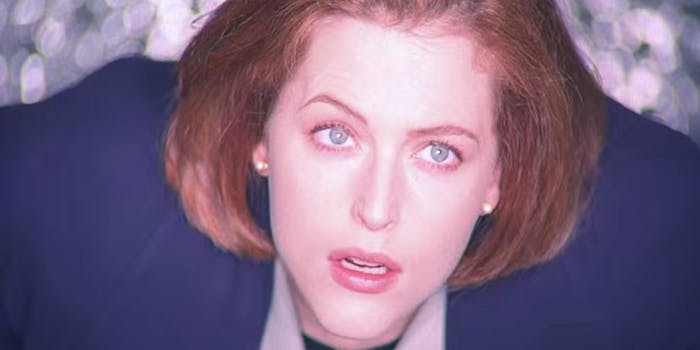 The texts came through in rapid succession: “OMG!” “Are you so excited?” “Did you hear?”

The X-Files was returning to television and I, a superfan with an “I Want to Believe” poster tacked to my bedroom wall, could only muster a flutter of dread. I love The X-Files—and I love that it’s over.

These days, shows end not with a bang, but with a Netflix contract or another revival. Case in point: Seven years after its cancellation, Arrested Development came back with a lackluster fourth season. Soon, Twin Peaks will return to Showtime (David Lynch willing). And now, The X-Files will resurrect with a six-episode miniseries on Fox in January.

Last week, The X-Files team released a 15-second teaser, with Agents Mulder and Scully back in action, and of course, the Internet went wild. I felt the protests welling up in me as I hunched over my computer to take my throne as proverbial television Grinch. When I voice my anti-reboot opinions, I feel like I’m wearing a sign that says “fight me.” We keep digging in the media graveyard, pulling up old bones. But when will we let the dead stay dead?

People seem to forget that with The X-Files, we’ve already gone down a similar path. The first pseudo-reboot, 2008’s I Want to Believe, was the film equivalent of someone you trust spitting into your mouth. Before that, the show sputtered to a lackluster stop in 2002 (already abandoned by Mulder and Scully—and most of its viewers).

Anyone who says “Just don’t watch it, then” doesn’t understand the all-encompassing obsession of the canon: the set of rules, timelines, and characters specific to a fictional world. Something stays canonical if it follows the show’s established (and often complicated) rules. Invested fans go insane over memorizing the canon, endlessly rehashing old conspiracies, moments of character development, and tiny, inconsequential pieces of trivia.

That’s because building on fandom framework is like a game. But to play the game, you have to know the rules—and every time a show reboots, those rules can change. Most great fandoms give you the freedom to move around a little bit: to imagine the before and after, or even the in between. For that to work, you need some information gaps to fill in on your own.

In light of how fandom works, I’m not necessarily against all spinoffs or reboots. I’m tentatively psyched for Fantastic Beasts and Where to Find Them, because it has the chance to expand the Harry Potter universe in unexpected ways—even in direct opposition to J.K. Rowling’s constant, unnecessary Pottermore addendums (which seem to just box it in). So when considering a reboot, I ask a few questions: Does it add something new? Does it take a different approach? Or does it just threaten to box things in?

Endings won’t always be perfect. Sometimes they’ll be rushed, convoluted, or strike before anyone expects. That doesn’t mean shows should just wander on forever, stumbling from network to network to streaming service. The instant gratification of a beloved show’s rebirth doesn’t make up for the loss of a conclusion. Stories need endings.

It’s not just cult-classic TV shows, of course. Endings occur in real life, too—in friendships, love affairs, broken-down cars, and college degrees. That narrative arc will fit into your own life again and again. That doesn’t mean accepting conclusions is easy. When you love something, you want it to last forever, even if that means dragging it out.

In fact, my earliest memory of the X-Files ties into memories of the house where I grew up: the house my dad sold in 2013. As a little kid, I’d pretend to fall asleep on the living room floor so that my dad wouldn’t banish me when the eerie theme song began. It’s a very particular memory for me: the beige carpet scratchy beneath my cheek, and my growing crush on David Duchovny (which thoroughly confused my prepubescent self). That feeling of being forgotten in plain sight, of knowing the way the room would feel if I wasn’t there.

By the time a “for sale” sign went up in the front yard, I wanted the house gone. A lot of things had shifted in a handful of years—my mom died, I graduated college, and I got into some nasty fights with my dad. I was desperate to say goodbye to that house, because the longer I held onto it, the more it became this hulking symbol of my family’s grief.

That still didn’t make it easy the last time I walked through, storing the rooms in my mind, knowing I’d never be back.

In our lives, there are things that make up our own personal canon: a person, a place, and even a TV show. Nothing will last forever, no matter how much we scream or protest or post online petitions to our Facebook feeds. Sometimes, it’s better to let things end—if not with grace, then with finality.

With two years of space, I’m remembering the good things about that house, along with the bad. I dream of walking through the rooms. I used to think “moving on” meant cutting something out of your life, but now I can see that it’s more like giving yourself freedom to constantly redefine. I carry those rooms with me, along with distinct moments dog eared in my life: a little girl on the living room floor, breathing quietly, watching a sci-fi show through squinted eyes.

Sometimes, it’s better to let things end—if not with grace, then with finality.

In a lot of ways, the shows we truly love become like the places we live. A safe place, a place of comfort.

There’s something special about the completion of things. The ability to experience something in its entirety: to know the ins and outs of its beginning, middle, and end. Just because a series wraps doesn’t mean you’re done. An ending means it’s time to mourn. But it’s also time to celebrate—and rewatch. And it’s a chance to remember something important: Letting something end doesn’t mean letting it go.