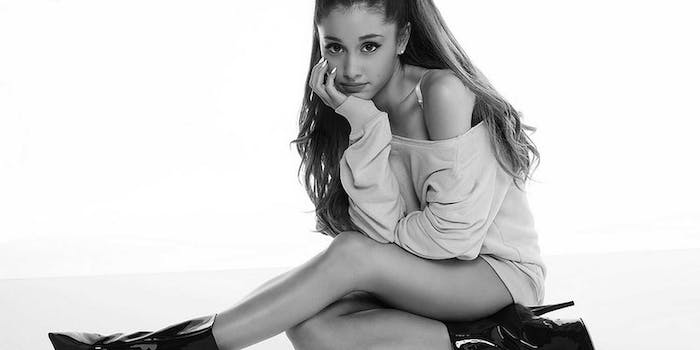 The #CancelWendyWilliamsShow hashtag has a selective outrage problem

Ariana Grande shouldn't have been the reason for the backlash.

Wendy Williams skewering pop stars is about as natural as shade on a cloudy day. Social media went atwitter Thursday evening after Williams placed an unlikely figure within her infamous crosshairs: famed donut licker, America-hater, and “Break Free” singer Ariana Grande. The talk show host, as per usual, spoke off-the-cuff about the young starlet but took it a step further—running into allegations of body shaming after claiming the diminutive Grande looks nothing like her adult age.

“She’s 21. She’ll forever look 12. Which, I don’t mean that in a good way,” Williams noted. “You know, it’s nice to look younger than you are, but when you look too young, and then you’re short—she’s only like 4’11”—I don’t look at her as, like, a woman.” Outraged by her comment, devoted Grande fans and other concerned observers stormed Twitter hours later, making demands to #CancelWendyWilliamsShow over her purported body-shaming.

so disgusting how entertainment in her eyes is just body shaming and putting people down #CancelWendyWilliamsShow https://t.co/IWGux4k5eA

So how did a remark on a celebrity’s apparent age, based on looks alone, morph into a controversy over body shaming? It’s what happens when the nature of celebrity gossip culture, which can be crueler than it is kind, gets picked apart without context, nuance, or the obligatory grain of salt.

Let me be clear: Body shaming is never okay—that is, when it’s actually happening. The term itself arose from fat- and body-positive activists (most of whom openly identify as feminists), women who tired of the mainstream media and Hollywood’s glorification of a thin female frame as an exclusive marker of beauty and desirability.

It’s since expanded into a conversation about the need for broader body acceptance, as evidenced by the pushback against Meghan Trainor’s “All About That Bass” for skinny shaming other women. As Girls Above Society president Lauren Galley wrote for Huffington Post, the song “lifted up curvy women” while putting skinny women down.

The conversation isn’t limited to body fat, but also other attributes, and it’s one that also affects men (albeit much differently). Grande, although she possesses a figure that most would consider the gold standard for American beauty, isn’t exempt from unfair, if not out-of-line criticism over how she looks. But the 50-year-old talk host simply regarded a popstar young enough to be her daughter as someone who doesn’t look like she’s reached adulthood yet. After all, she was a teenager two years ago.

But without that contextualization, the outraged Grande camp (and others who joined in) gleaned something completely different from Williams’ comment—that Grande, somehow, isn’t a “real woman” because of how young she looks. Is that really the best argument for canceling one of TV’s top-rated talk shows? Absolutely not.

If you’ll argue to #CancelWendyWilliamsShow, start with how she misgenders or calls Caitlyn Jenner an “attention whore” for coming out trans

To note, Wendy Williams was radio’s Queen of Mean for nearly two decades before she softened an otherwise caustic brand for mainstream appeal. Among Williams’ offenses, she called Whoopi Goldberg an ugly lesbian and attacked Whitney Houston during the Being Bobby Brown days, arguably one of the lowest points of her career (and her life). Williams trash-talked Houston so much that she baited Whitney herself into a lengthy one-on-one interview.

I watched the first few episodes of her TV show—and then some—and saw a different Williams than the one who asked The Bodyguard star about whether she and her husband “have wild, hot monkey sex” over the radio. But with time, the gloves came off. She played nice—and won over some of her biggest foes, including Goldberg, whose guest appearance a few years back moved Williams to tears. “You grew up,” Goldberg said after Williams acknowledged their bad blood.

As the Whitney Houston incident attests to, there was plenty of opportunity before the Grande rub that any concerned fan—or anyone who cares about the intersectional, feminist issues of body image—could’ve levied as a reason to put the kibosh on Williams’ show.

Just months ago, as Caitlyn Jenner prepared to come out as a transgender woman in a Diane Sawyer interview, Williams mocked the former Olympian and Keeping Up With the Kardashian star—likening the public disclosure to “fame whoring.” “If this wasn’t an obligation due to my career, I wouldn’t watch,” Williams said. “I feel duped by Bruce. … He was supposed to be the rock of the family. I don’t feel duped because he’s turning into a woman. I feel duped because he’s the same fame whore as the rest of the family.”

And, for extra oomph, she even took a few transphobic jabs. Williams continued:

I’m pissed at Bruce, he was supposed to be the rock and so solid. He’s the one who rankles the girls in when they’re doing too much. Bruce has a daughter who is 17, dating a 25-year-old father of one. And she’s a high school dropout, and she’s messing with her face, and her boobs, and her behind way too early in life. I’m all for and very happy for anyone who lives in their own truth. He should have thought about [transitioning] before he had all the kids. … You’ve got kids to explain to …  Belinda, shame on you!

Although Wendy eventually walked back her remarks in an interview with with HuffPost Live’s Marc Lamont Hill—following some backlash from LGBT media outlets and organizations—the damage had already been done. But where was the hashtag for Jenner—a transgender woman, who is part of one of our vulnerable communities, enduring anti-trans misogyny from a cisgender woman?

There’s no denying that Wendy Williams is going to “say it like she means it,” which is more than a personal mantra for the TV host—it’s indeed one of her most affable characteristics. America’s starting to tire of cookie-cutter conversations and “safe” responses to the issues of the day. What the public wants is not a career-obsessed talking head, nor do they want a politician concerned with pleasing everyone. Instead, TV audiences (and even voters) prefer to connect with public figures they feel like they could easily chat with over a beer and authentically speak their mind.

For all his shortcomings—and there are many—Donald Trump has emerged as the early frontrunner in the Republican presidential primary, largely a credit to his candor. Even if his views on immigration, women, and a host of racial issues aren’t at all in line with the needs of marginalized communities, some voters still connect with him anyhow. As former Trump adviser Roger Stone told HuffPost Live’s Caroline Modaressy-Tehrani, he’s an appealing candidate because he’s not pandering. He’s frank. Voters like that.

Trump and Williams may be nothing more than entertainment for some, but there’s a time to be outraged and a time to simply disagree with someone’s objective assertion, no matter how famous or powerful they are. It’s possible for someone like Williams to “say it like they mean it,” without doubling down on harmful tropes or doing a disservice to communities in need of our support. But the selective outrage, as evidenced by the Grande uproar versus other Williams pitfalls, is justice for no one.

Just because we don’t like someone’s opinion, doesn’t mean someone else isn’t thinking the exact same thing. If we’re going to ask for Wendy Williams to think before she speaks, Twitter would be advised to do the same.

Photo via boloround/Flickr (CC BY SA 2.0)