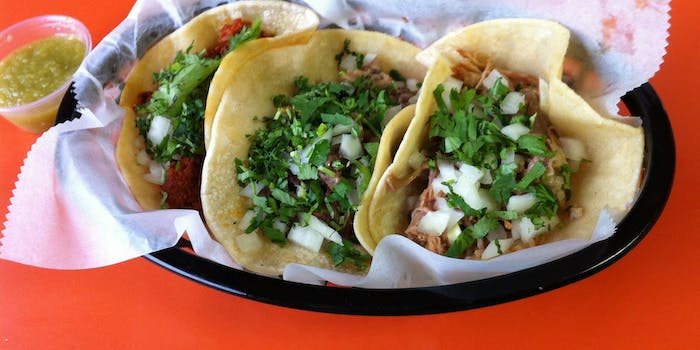 We still don't know who made them, or why.

Given the controversy surrounding all things Donald Trump, many of his critics were thrilled to learn that several Mexican restaurants had begun banning Trump supporters from their establishments.

A sign bearing the logo of Taco Cabana, a popular chain in Texas, read, “You can’t have your taco and eat it too.”

There’s just one problem: these notices are fake.

Over the weekend, a photo of the sign, along with a similar one at another popular Mexican food spot called Mama Margie‘s, began floating around the Internet. The common theme was that, if Trump supporters were going to support his views about Mexicans, they wouldn’t be able to enjoy the culinary bliss that is Mexican food.

While the pro-Trump Reddit forum r/The_Donald has been up in arms about the sign, other sections of the Internet embraced it.

The Tumblr post of one of the signs racked up more than 26,000 notes. Facebook comments include “HAHAAA!!! LUV THIS” and “I’ve never wanted TC or Margie’s so badly.”

But this taco shell is about to crumble.

Taco Cabana’s COO Todd Coerver told the Daily Dot that the company is not responsible for the sign. Here’s his statement:

Taco Cabana’s first priority is to ensure our guests feel welcome to enjoy great tacos. Taco Cabana is not responsible for the placement of this unauthorized sign on our property. Other local restaurants in the San Antonio area have also been targeted. The sign has only appeared in one of our restaurants and we promptly removed the sign and have alerted all restaurants to remove any unauthorized signage.

Mama Margie’s has also clarified that sign was not authorized. Apparently, “Mama isn’t in the business of politics, but of making tacos.”

While these signs have been proven to be fake, we still want to know who made them and began placing them at Mexican restaurant chains.

And while Mama Margie’s claims that it caught the perpetrator on tape and that it wasn’t an employee, Facebook commenters believe that a manager was behind the sign. The comments on the chain’s Facebook post have devolved into a mess of people bickering about what should be done to whoever installed the signs.

It’s still unclear whether this was a prank to piss off Trump supporters whether it was actually meant to keep them away from the restaurants. While the signs might not align with the companies’ philosophies, someone obviously felt strongly enough about the issue to make and install the signs. Maybe it’s someone who hates Trump supporters and wants to deny them the joy of cheap margaritas. Or maybe it’s just someone who’s genuinely scared of his supporters and wants them to stay far away from these places.

Whatever the motives of the signs’ creators, at the end of the day, it’s important to know that they’re fake.