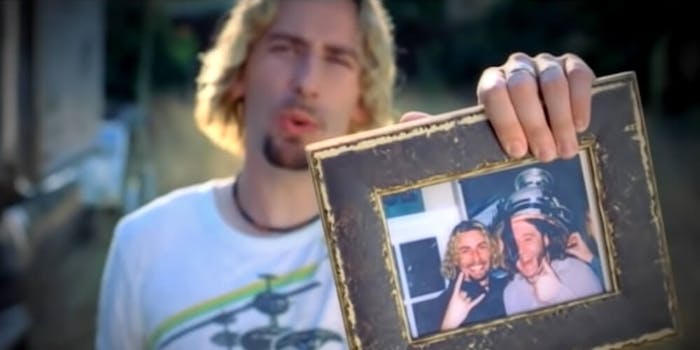 Why drag Nickelback into this?

Update Oct. 3, 9:09am CT: Following a copyright claim from Nickelback, Trump’s video has been removed from Twitter, the Guardian reports.

In the midst of what some are considering to be one of the biggest presidential scandals in history, Trump is doubling down on his belief that when Biden was vice president, he tried to use the U.S. government’s power to protect his son Hunter Biden.

Hunter Biden had, in 2014, been invited to join the board of Ukrainian energy company Burisma Holdings. While on the board, he reportedly earned nearly $50,000 a month and then left the board once his five-year term expired. The energy company’s owner, Mykola Zlochevsky, was reportedly at one point being investigated by Ukraine’s prosecutor general for money laundering and corruption.

Once Viktor Shokin became prosecutor general, he overtook the investigation. However, the Obama administration, along with many others, apparently believed that Shokin was not doing enough to prevent corruption in his country. Therefore, in 2015, Biden, then vice president, had reportedly given a message to Ukraine, stating that the U.S. would hold nearly $1 billion in loan guarantees unless it got rid of Shokin.

Shokin was eventually fired in 2016.

And Trump is now touting the claim that the real reason Biden pressured to have Shokin removed was in order to protect his son from the corruption claims that plagued the company he was on the board of.

These claims have not been confirmed. In fact, Biden responded to the allegations by stating, “There is zero, zero, zero, zero evidence of any assertion being made.” Other media outlets have also cast doubt on Trump’s allegations, but that did not stop Trump from tweeting out a Nickelback parody meme, once again hammering down on the claim.

The heavily edited video then cuts to Nickelback’s “Photograph” music video, in which the photograph used has been replaced with a 2014 photo of Joe Biden, his son, and Devon Archer who apparently served on the Burisma Holdings board along with Biden’s son.

LOOK AT THIS PHOTOGRAPH! pic.twitter.com/QQYTqG4KTt

Twitter is getting used to Trump’s wild tweets and could only comment on how crazy U.S. politics have become in recent years.

“We really live in a country where the president attacked a former Vice President by posting an altered Nickelback video,” Twitter user @hk125504 wrote.

We really live in a country where the president attacked a former Vice President by posting an altered Nickelback video. pic.twitter.com/eswG3ThlDZ

Currently "Moloch" and "Nickelback" are trending next to each other in my Trends bar, if anyone is curious about how badly things are going in the U.S. right now.

Who EVER thought Nickelback would have to write a cease and desist letter!? When has anyone ever used one of their songs!?

“Ummm so now our President is tweeting out Nickelback video memes? We are definitely living in the simulation,” Twitter user @alvanderp wrote.

Ummm so now our President is tweeting out Nickelback video memes? We are definitely living in the simulation.

People even began to meme the meme.

“TAKE A LOOK AT THIS PHOTOGRAPH! WHAT KIND OF NAME IS NICKELBACK? NICKELS ARE FOR POOR PEOPLE! THEY SHOULD BE CALLED BILLIONDOLLARBACK INSTEAD! SAD!” Twitter user @bornmiserable wrote, along with the “Trump yelling at lawn-mowing boy” meme.

"TAKE A LOOK AT THIS PHOTOGRAPH! WHAT KIND OF NAME IS NICKELBACK? NICKELS ARE FOR POOR PEOPLE! THEY SHOULD BE CALLED BILLIONDOLLARBACK INSTEAD! SAD!" pic.twitter.com/DpfhADMKVq

Look at this photograph
Trump’s presidency makes me laugh
This is where he messed up
I think his impeachment is comin’ up
Every tweet has him slinking towards the back door
They have his impeachment ready on the Senate floor
Not hard to say it
Good Bye, Good Bye
#nickelback

Trump has been in extremely hot water lately after it was revealed he tried to pressure Ukrainian President Volodymyr Zelensky to investigate Hunter Biden’s alleged business dealings in the country. A whistleblower from the intelligence community filed a complaint regarding Trump’s phone call, and now Democrats are pushing for Trump’s impeachment. As more developments begin to unravel and members of his staff resign, Trump has maintained his innocence.

“This is a hoax. This is the greatest hoax,” Trump said to reporters regarding the impeachment inquiry. “This is a fraudulent crime on the American people. But we’ll work together. With shifty Schiff and Pelosi and all of them, and we’ll see what happens, because we did absolutely—I had a great call with the president of Ukraine. It was 100%. You have the transcript.”

Nickelback has yet to respond to Trump’s interpretation of the meme. Meanwhile, CNN is reporting that House Democrats are hoping to impeach the Trump by Thanksgiving. Perhaps Trump should be playing Nickelback’s “Savin’ Me” instead.