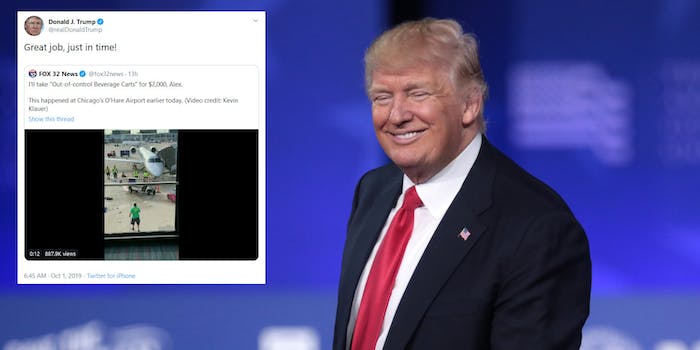 President Donald Trump joined thousands of other people who shared a viral video of an out-of-control airport cart spinning in circles before being stopped—and people began comparing the video to him.

The video captures a beverage cart spinning wildly in circles at O’Hare Airport in Chicago as a group of workers stare at it, unsure of what to do. As the cart spins closer to the nose of an airplane, a worker drives a red loading truck straight into it, knocking it over and stopping it from causing damage to the plane.

Crazy event at ORD. Heads up safety move by a ramp worker! pic.twitter.com/SQi5zB0Ooz

A spokesperson for American Airlines told ABC7 in Chicago they believe an accelerator on the cart became stuck, leading to it spinning in circles.

On Tuesday morning, Trump weighed in on the video.

Trump inserting himself into the viral discourse quickly led people to make comparisons to the video and his presidency.

Many people compared the president to the spinning beverage cart, and the red truck to “impeachment” or other things.

The guy with the red truck is impeachment. https://t.co/oLoffCOfhC

@SpeakerPelosi is driving the red cart, the runaway cart is your administration. @realDonaldTrump @CaroleL51961 https://t.co/KTo8Hz47xH

Video shows adequately that when something, like a presidency, is completely out of control, you must do everything to stop it. https://t.co/SsoCIYB0eQ

This maneuver is known in the business as "The 25th Amendment" https://t.co/17KTEm6pfZ

Ironic! He's using the meme that explains his presidency. https://t.co/wmYPuOn0VR

Trump is the beverage cart. https://t.co/CpQsxVkdGD