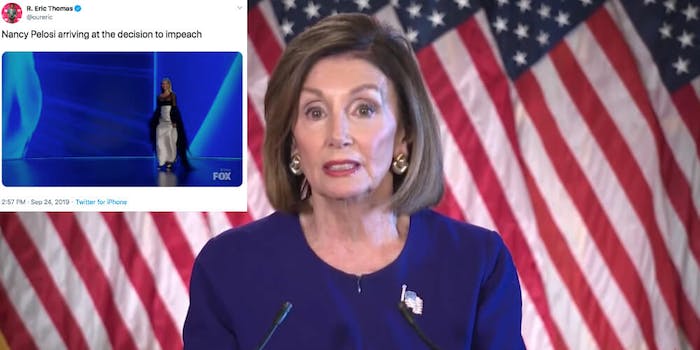 Most of the memes imagine Pelosi on her way to impeach Trump.

“Today I’m announcing the House of Representatives is moving forward with an official impeachment inquiry,” Pelosi said in an announcement on Tuesday evening.

Pelosi has long resisted the call from many Democrats to start impeachment proceedings in order to get Trump out of office. The tipping point for Pelosi was apparently Trump’s recent controversy surrounding Ukraine, where he admitted to discussing presidential candidate Joe Biden with Ukrainian President Volodymyr Zelensky. Trump then put a hold on nearly $400 million in military aid to Ukraine to allegedly put pressure on the country to investigate Biden’s son.

“This week, the president has admitted to asking the president of Ukraine to take actions which would benefit him politically,” Pelosi explained. “The actions of the Trump presidency revealed dishonorable facts of the president’s betrayal of his oath of office, betrayal of national security and betrayal of the integrity of our elections.”

For many, the announcement was long overdue. It even prompted an overabundance of celebratory memes, most of which are about Pelosi on her way to impeach Trump.

Me coming to join the #ImpeachTrump party pic.twitter.com/WjQjzgvh50

Nancy Pelosi arriving at the decision to impeach pic.twitter.com/96mT0pWALC

Nancy Pelosi on her way to impeach Trump pic.twitter.com/DU0AJIx20h

It seems like the only person who didn’t see the impeachment proceedings coming was Trump, himself.

“Pelosi, Nadler, Schiff and, of course, Maxine Waters! Can you believe this?” he wrote in response to the news.

Pelosi, Nadler, Schiff and, of course, Maxine Waters! Can you believe this?