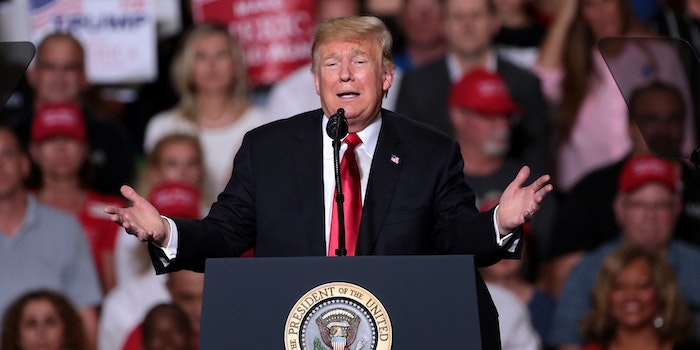 The hashtag inserted Trump into a number of moments in history.

President Donald Trump on Monday told 9/11 victims and their families that he went “down there” to Ground Zero at the signing of a bill that would permanently fund their compensation fund.

Now, his claims have sparked a hashtag mocking him.

It hasn’t been proven that Trump was at Ground Zero looking for survivors after the attacks like he’s repeatedly said.

The remarks from the president on Monday were criticized, and within hours, people on Twitter began inserting Trump into random points of history as a way of mocking his questionable memory of 9/11.

The jokes centered around the hashtag #LostTrumpHistory.

As the Washington Post points out, the hashtag seems to have gained steam after George Conway, the husband of Kellyanne Conway and consistent critic of the president, pushed it.

“In 2019, astronomer Donald Trump discovered that the Moon was a part of Mars. #LostTrumpHistory,” Conway tweeted on Monday afternoon.

In 2019, astronomer Donald Trump discovered that the Moon was a part of Mars.

Soon enough, thousands of other people began sharing “memories” of Trump saving Hurricane Katrina victims, being part of biblical stories, and even inventing wrestling, among many others.

And we all remember the iconic image of @realDonaldTrump on his trek to save Hurricane Katrina victims. #LostTrumpHistory pic.twitter.com/Ew9xu74IhI

Taken the day Trump proved the earth revolves around the sun pic.twitter.com/mzKGs1BnQO

Who could forget that brilliant Trump save against the Rangers in 2012.#LostTrumpHistory pic.twitter.com/92mCncZUS6

Donald Trump was the closing pitcher in game 7 of the 1986 World Series. #LostTrumpHistory pic.twitter.com/NzaYjxYOwG

In 1975 Trump discovered the Lost City of Atlantis and then lost it again #LostTrumpHistory pic.twitter.com/O7JYEezsUc

That’s quite a storied life.