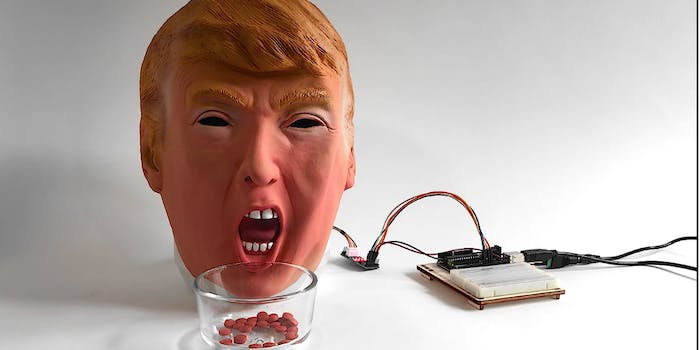 Ibuprofen-spitting Trump must be working overtime.

Do you get a headache every time President Donald Trump tweets? Well, Paul Spelman has got you covered.

Spelman created a robotic head that spits out an ibuprofen pill each and every time the president tweets–which is quite often.

“I’ve been learning how to code and I wanted to build a project to practice what I’d learnt and pick up some new skills,” Spelman told the Daily Dot. “I wanted to build something fun that would hopefully give people a bit of a laugh, and also make a point about the current president’s unusual approach to running the country.”

The writer turned coder detailed how his invention works in the web development (r/webdev) subreddit as well as in a YouTube video, which features the uncanny simulacrum of the president–complete with empty eye sockets and a horrifying, gaping maw.

“The Javascript code continuously checks @realDonaldTrump for new tweets. As soon as a new tweet appears, the Arduino stepper motor turns 360 degrees, dispensing a pill which falls out of the mouth and into the bowl,” Spelman wrote on Reddit.

The discussion–as with many involving politics, nowadays–eventually got too heated, leading the moderators to lock the post.

“Gonna lock this thread because Trump supporters are the worst people in the world,” a moderator wrote.

On Monday, a moderator of the subreddit posted a “rule update,” announcing that there would be no more political posts.

“All posts to /r/webdev MUST be directly related to web development. Posts which are directly political, or are designed to incite political discord, will be removed,” moderator so_much_reddit_T-T wrote.

Despite all that, Spelman said the response he’s received has “generally been really positive.”

“Some people like the tech aspect of it and some people just think it’s funny. I did get quite a bit of push back from Trump supporters when I posted it on Reddit, which is to be expected,” he said.

Spelman also posted the code on GitHub, so if you want to build your own ibuprofen-spitting president, the option is there. As for Spelman, he’s already thinking about his next project.

“I’m gonna come up with another project idea and just keep building stuff–the whole process has been really fun and a great learning experience,” Spleman said.