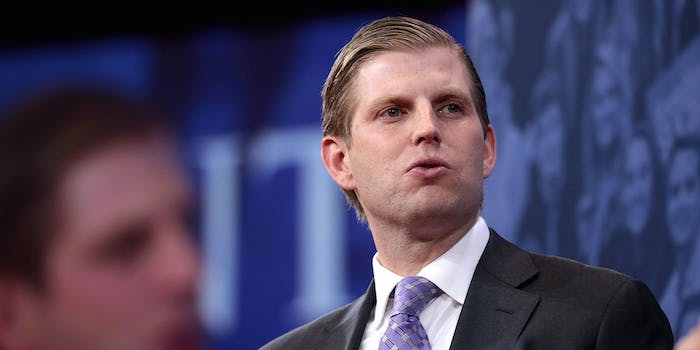 Mashups of classical music and gangster rap, anyone?

That’s because Slate writer Ashley Feinberg appears to have tracked down the online activity of President Donald Trump’s middle child. The username skibum845 seems to have been used by Trump across numerous websites.

A skibum845 on Pinterest is listed as belonging to an “Eric T.” Another skibum845 on the Trapshooters.com forum has the same birthday as Eric, January 6, 1984. A skibum845 on Photobucket went by the name “Eric Trump” before eventually changing that name to “E. Smith.”

That Photobucket account shows numerous pictures of rifles and the body of a yellow Camaro in a garage. On the wall in the garage is a photo of the 1985 New Jersey Generals, a football team that was part of the failed United States Football League and belonged to Donald Trump. Next to that photo is what appears to be a swimsuit model and a peculiar drawing of the female anatomy.

The links keep going. The skibum845 moniker was also tied to an account on the PracticalMachinist.com forum, as well as a mysterious YouTube playlist.

So what does skibum845, a.k.a almost certainly Eric Trump, like to watch on YouTube? Machinery and gun videos as well as bizarre mashups of classical music and gangster rap it seems. After reaching the Trump Organization for comment, Slate says the playlist was made private and then later deleted entirely. That playlist, by the way, was named “Eric.”

Ever heard West Coast icon 2Pac rapping over “Moonlight Sonata”? How about Ice Cube and The Notorious B.I.G. getting down on the “Hello VS. Party & Bullshit (Matoma Remix)”?

Other videos on the playlist include everything from deleted Borat scenes to Phil Collins performing “In The Air Tonight” live.

But maybe the discovery isn’t so bad, at least for one YouTuber who left a comment for skibum845 after watching one of his favorite gangster rap/Norwegian DJ mashup videos.