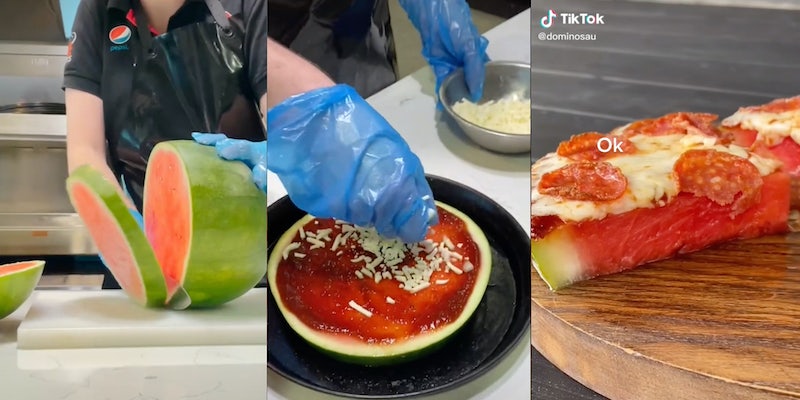 ‘It might be an acquired taste’: Domino’s posts TikTok of watermelon crust pizza, distressing fans

If you already can’t stomach the idea of pineapple on pizza, then this new type of pie from Domino’s Australia might be a tough sell.

In a now-viral TikTok, the pizza chain shared a video of its workers going to extreme lengths to create a “low-carb” watermelon pizza. First shared by the official Domino’s Australia handle, the clip shows an employee creating a pizza using a thick watermelon slice as the crust, followed by a marinara, cheese, and pepperoni topping.

“Y’all keep asking us for a low-carb crust option,” the video caption reads, going on to credit the original chef that came up with the bizarre pizza ingredient. “Nah [for real] when we saw @elburritomonster make a pizza on watermelon, we HAD to give it a go.”

In the video, the Domino’s team acknowledged that the pizza was a bit bizarre. “This is equally confronting to us, but it does look pretty good out the oven,” a narrator said in the video. “We think it might be an acquired taste.”

But people in the comments were not on board with the pizza chain’s latest concoction.

“This looks incredibly vile,” one woman wrote. “What the fuck I am Italian, and this is an insult for us.”

A third commenter called the recipe a “war crime.”

That said, you maybe shouldn’t expect this pizza to start being sold in stores anytime soon. In the comments, the Domino’s Australia account wrote: “In case you didn’t make it to the end, we also weren’t too into it.”