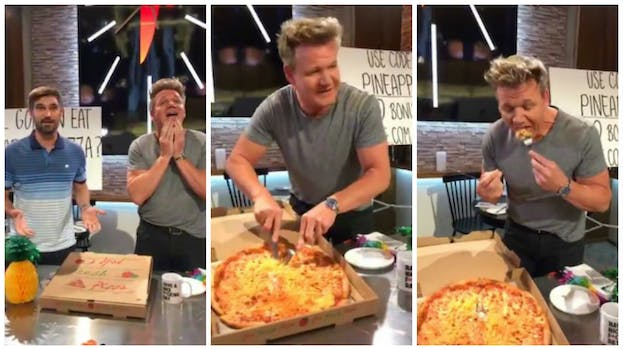 Ramsay compared it to a 'moose turd.'

Pizza is perhaps the least controversial food in existence. Most everyone can agree that pizza is good, right? Even bad pizza is great. But there is one potential ingredient that gives pause to the all-hail-pizza crowd, one question that can turn a pizza party into a pizza catastrophe. Is it appropriate to place pineapple on a pizza?

We pose that question to celebrity chef Gordon Ramsay, a man who has no problem roasting strangers on Twitter about their lack of cooking skill and their overall refinement.

He definitely doesn’t believe pineapple should be anywhere near a pizza, but for charity, Ramsay said he was willing to suffer through a fruit-covered slice. All he needed was 500 donations to the Gordon and Tana Ramsay Foundation that raises funds for a London children’s hospital.

Ramsay hit that number, and while apologizing to “all my fellow chefs” for the food felony he was about to commit, he kept his pineapple promise and chowed down on Facebook Live.

I’m about to find out if I have to eat a monstrosity of a pineapple pizza… in the meantime, use code PINEAPPLE to receive 100 bonus entries to be my VVIP on The F Word: http://bit.ly/Pineapple-F-Word-VVIP

Props to Ramsay for somehow getting that “moose turd” concoction down his gullet.

But even though I’m an unabashed hater of pineapple on pizza, Ramsay committed an even more egregious crime during his demonstration. Look at how Ramsay eats the slice. Disgusting, right? As a top chef and one of the world’s foremost authorities on food, he should certainly know that eating pizza with a fork and knife makes you look like a rube.