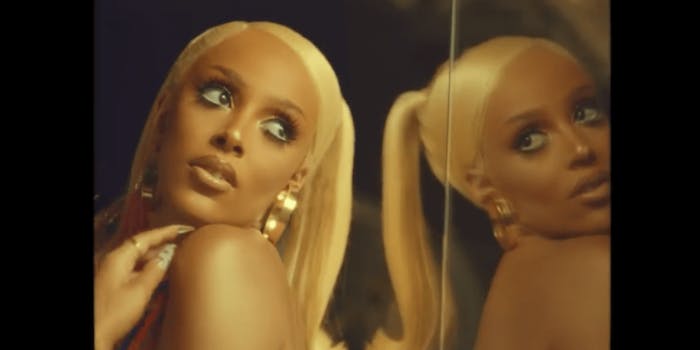 'Doja Cat Is Over Party' is trending on Twitter.

Doja Cat is trending on Twitter after fans started calling the singer/rapper out for allegedly participating in racist chatrooms. The social media users are now threatening her with cancelation for what many are calling her “racist history.”

Apparently, someone uploaded a video, which allegedly shows the “Say So” singer in a TinyWebs chat room socializing with people known to make racist comments.

The allegation that Doja frequents the racist chatroom set off an entire thread on the message board website Lipstickalley. The user was in incognito mode leading the charge and raising concerns about the singer’s online behavior.

“Rooms like this (Tea Time) are culturally racist,” the user posted to the board. “She goes on for hours at a time…they often say racist things and she jokes along. It’s pathetic to watch.”

It has yet to be verified whether the woman spotted in the video of the TinyChats chatroom is the rapper but that didn’t stop the internet from issuing an immediate cancelation.

Other Twitter users used the platform to bring attention to a problematic song title released by the artist called “Dindu Nuffin,” a slang that people say is typically used by racists to poke fun at victims of police brutality and simultaneously diminish African-American Vernacular English.

“F*ck if the tweets of her being racist are real or not, do y’all hear this song? That’s enough for me,” user @zaminzo2 wrote.

Many on Twitter believe the song was a response to the death of Sandra Bland.

However, some users defended the artist’s use of the racist slur, arguing she used it against herself as a tool for artistic expression.

“It appears to me that the lyrics aren’t racially insensitive in any way and the way she uses dindu is like how Jay Z did in story of OJ. Basically painting herself as the dindu,” @JayPicante tweeted.

The news of Doja Cat’s alleged racial insensitivity took Twitter by storm, especially after Lana Del Rey was recently called out for a post which appeared to attack Black women artists.

“Lana Del Rey and Doja Cat getting exposed for being racist within 24 hours,” @_derekestrada tweeted along with the hashtag #dojacatisoverparty.

Doja Cat has yet to respond to the allegations.