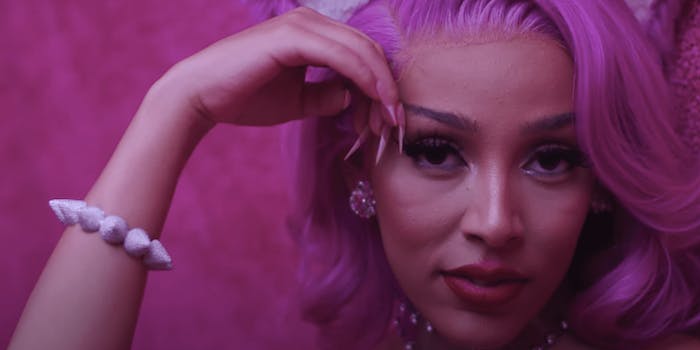 No, Doja Cat will not be showing you her boobs now that ‘Say So’ hit No. 1

'I'm just gonna be honest with you guys. I did play you.'

Doja Cat and Nicki Minaj made history on the Billboard Hot 100 this week, becoming the first female rap duo to ever top the chart with their remix of Doja’s “Say So.”

It was a cause for celebration after the infectious disco-pop song spent months climbing the chart, thanks largely to an accompanying viral dance challenge that exploded on TikTok. For some fans, though, it was a bittersweet victory, as Doja Cat reneged on her promise to “show you guys my boobs really hard” if “Say So” hit No. 1.

Doja Cat originally made the promise on Twitter last Tuesday, when it looked like “Say So” had a fighting chance of topping the Hot 100. “If say so hits #1 I’ll show you guys my boobs really hard,” she wrote. Fans were really, really excited at the prospect, as evidenced by the tweet’s nearly 410,000 likes.

Doja Cat continued baiting fans as they streamed “Say So” with a vengeance.

Doja’s bargain with her fans made yesterday’s Billboard chart reveal even more momentous. Almost as soon as the news broke that “Say So” hit No. 1, the singer was inundated with requests to show her boobs—including from her collaborator, Minaj.

Fans flooded Doja’s Instagram Live yesterday to demand she make good on her promise. And that’s when she dropped the bomb: She wasn’t showing her boobs.

Dear reader, that was the day the internet died.

It’s hard to tell just how many of these rage tweets are jokes and how many are sincere. But if you only streamed an artist’s music on the condition that you would later get to see that artist’s boobs and then threw a tantrum when that artist revealed she was obviously joking, then yeah, you did play yourself.

So far, Doja seems unbothered by the backlash. In fact, she relished the outrage later on Instagram Live.