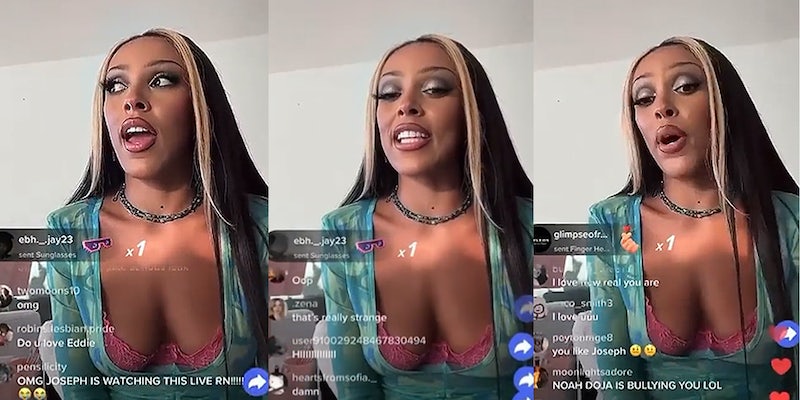 That video has since been deleted, but Doja Cat went live on TikTok Thursday night to address Schnapp posting their private convo. She says she knows that young people (Schnapp is 17) make mistakes and “do dumb shit” but that the move to post their DMs was “unbelievably socially unaware and wack.”

The video is a bit distracting because Doja is attempting to be serious, but viewers keep putting goofy filters on her. As the video circulated and was reposted to Twitter, “He’s 17” trended, and some people expressed discomfort over Doja (who is 26) messaging a minor, even if it was to ask if his adult co-star had a girlfriend. According to Schnapp’s TikTok, he did direct her to Quinn’s Instagram account.

“Insta has a search bar,” one commenter said. “She is more than capable of using that search bar as she did this live.” Doja had previously expressed her thirst for Quinn on Twitter.

She says in the TikTok Live that she doesn’t know how old Schnapp is but doesn’t think he’s “over 21.” Neither Schnapp nor Quinn have responded yet.