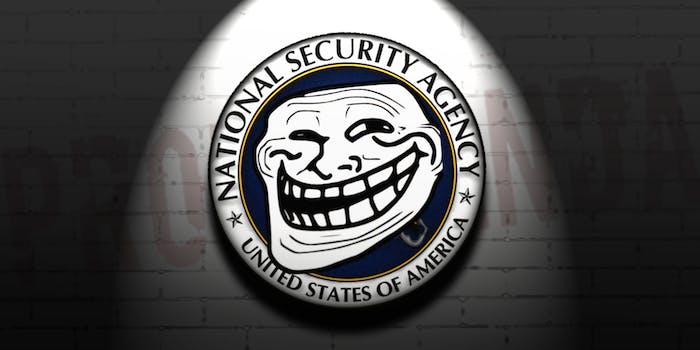 For some reason, the Department of Defense released this weird interview with NSA Director Gen. Keith Alexander.

It’s a well known fact that the U.S. government is conducting intelligence gathering operations on a massive scale, spying on terrorists, leaders of allied nations and even their own citizens.

A much lesser known fact is that U.S. Department of Defense (DoD) has an indescribably odd predisposition for publishing home videos on YouTube.

The DoD’s latest artistic endeavor has received an unusual amount of attention, likely due to its topical subject matter. In it, National Security Agency Director Gen. Keith Alexander discusses “Cybersecurity.” In terms of popularity, the video ranks somewhere between such DoD classics as the U.S. Navy’s 1973 animated cartoon about venereal disease and a 2008 video of a woman giving birth on livestream.

The interview takes place in a dimly lit room, most likely at the National Cryptologic Museum at the NSA headquarters in Ft. Meade, Md. The location isn’t specifically mentioned, though Gen. Alexander does point to a World War II German Enigma machine and there are only a few on display in the U.S.

For some reason, Alexander seems to credit the United States almost exclusively for deciphering the secrets of the Enigma device, a celebrated achievement of the Allies during the World War II. Historically, British mathematician Alan Turing is credited with that accomplishment.

The awkwardness continues, though, a lot of it seems to be fault of the video editor. At one point during this half-hour production, Gen. Alexander names the metadata and PRISM surveillance programs, then credits the silent “interviewer” with having brought up the topic.

“We have not had any willful or knowing violations of those programs. Period. There have been in other programs, but not in those two, the ones that you bring up.”

It’s unclear why someone is sitting in front of Alexander, other than perhaps to give him someone to talk to. The questions were instead inserted in post-production and they only appear as text on the screen.

It’s difficult to pinpoint specifically, but something about them seems slightly slanted in favor of the general’s perspective: 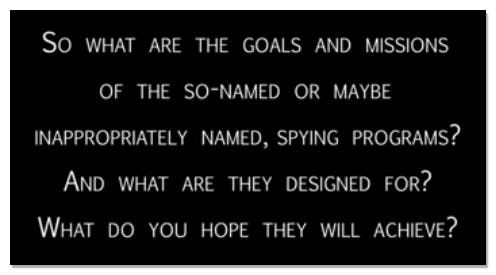 Yet, the strangest part of the NSA’s video by far is a bathtub metaphor Gen. Alexander uses to equate NSA surveillance to a child—excuse me, a boy—taking a bath. The top two mysteries surrounding the NSA right now include what the next Edward Snowden document will say and why the following quote didn’t end up on the DoD’s cutting room floor:

The video definitely bombed on YouTube. Some of the 3,000 negative comments seem to indicate it might have something to do with the NSA’s spying practices. At time of writing, the video has 11,759 thumbs down, compared to 183 up votes.

Like many of the Pentagon’s YouTube videos, the video was produced in-house by the Defense Media Activity, which according to their Wikipedia page, is essentially the Audio/Visual Club of the U.S. Military.