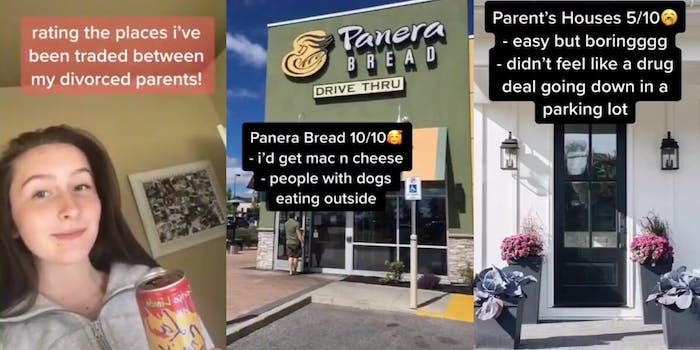 One teen jokingly rated the places she's been 'traded between.'

A new genre of TikToks is dominating the platform, and it’s specifically for kids who have divorced parents.

Most of the videos are funny, sarcastic, and lighthearted. They are uniting both trendy TikTok teens and Millennials who are often discovering the divorce videos on Twitter.

“Child of divorced parents TikTok hits different,” Twitter user Joseph Longo wrote along with one of the videos.

In the video, TikTok user @lu.angove rates different places where she’s been “traded between” after her parents divorced.

For example, Panera Bread received a 10/10 for having macaroni and cheese and for the people eating outside with their dogs. But getting “traded” at one of her parents’ houses only got a 5/10 because it was “boring.” The house still got OK marks, she said, because at least it didn’t “feel like a drug deal going down in a parking lot.”

But this isn’t the only type of divorce TikTok. A quick scroll through the hashtag “#divorce” will show thousands of relatable videos that amount to over 473 million views.

Several of the TikToks poke fun at awkward moments, like when both of @jesshellman’s parents came to her doctor’s appointment.

“When ur divorced parents are in the same room again for ur doctors appointment regarding ur mental health,” she wrote in the caption.

In the video, she pans to both parents in the room and then zooms in on her face as she laughs. Meanwhile, the Phineas and Ferb song “We’re Getting The Band Back Together” plays in the background.

Other videos are celebratory, showing off the parents’ close relationship or highlighting both parents’ simultaneous glow ups after separating.

For example, TikTok user @al3xandruh_ shows both parents’ transformations after their divorce. Both parents got physically active and pursued their dream jobs. She ended the video noting that her parents are still on good terms.

Then there’s a section of divorce TikToks that compares the living situation between their mom’s and dad’s houses. Some TikTok users show off their two rooms. Others, like TikToker @maddiemiller.1, show off the comical difference between food options.

In the food comparison video, the TikTok user posts her mom’s full pantry, a candy shelf, and a packed refrigerator. Then, it shifts to the dad’s food. She starts off with a 24-pack of Miller Lite, a jar of pickles, and pretzels.

The divorce TikToks cover everything from these types of playful jokes about the family dynamic to upsetting moments like spending holidays separated.

Most videos are flooded with comments from kids with divorced parents discussing similar situations. The videos seem to function as a coping mechanism and a way to make light of the situation.

So in the spirit of the TikToks, it might be a good time to remind you: Don’t forget to bring your own food to dad’s house if you don’t want to be stuck with pickles.